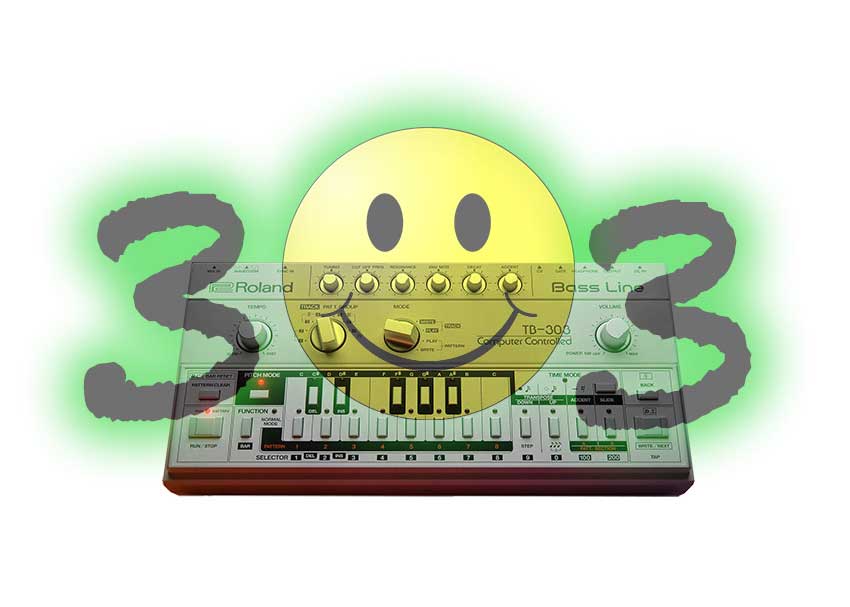 The Roland TB-303 houses one of music’s most singular sounds. Scroll down a bit and hit play on Phuture’s “Acid Tracks.” What do you hear? That knocking beat of the TR-707 gives way to what sounds like a bass line contorting itself from within. Slippery, percolating, and squelchy, it’s the sound of an unique instrument being pushed to its limit.

When Ikutaro Kakehashi entrusted product designer Tadao Kikumoto to create something to accompany a new, more compact Roland drum machine they were designing, Mr. Kikumoto’s aim was recreating the other important piece of the Rhythm puzzle: a bass guitar. The TB-303, when used with a Roland TR-606 Drumatix drum machine, in theory, could provide any aspiring Rock or Pop musician a pair of compact devices that could provide simple accompaniment.

Released in 1982, the TB-303, this battery-operated silver “toy-looking” device set no worlds afire despite its bargain price of $400. It was too machine-like to replace the sound/control an actual electric bass could produce — not “human” enough to replicate the fluid playing off an actual bass player. When the TB-303 was quietly discontinued two years later, Roland could barely justify the 10,000 units it had produced.

What could you do with a monophonic, single-oscillator synthesizer? This is something that bands wrestled with. When the first adopters received their TB-303s, all the instructions might as well have been in Greek. As hard as it was to understand how to actually program patterns or save sequences, Roland did themselves no favors when they sent initial shipments with manuals solely written in Japanese. When English manuals finally started to arrive, users were greeted with this salient paragraph:

F. How To Use This Manual.

The switches and control knobs have several functions, so operating the TB-303 may seem a little complicated. You may find difficulty using the TB-303 at first, because it is so different from a bass guitar or keyboard instrument. There, this manual includes a basic, intermediate, and advanced course to help you understand these operations step by step. However, each individual operation is quite simple, so take your time and master each step.

Early groups in the UK, like Orange Juice and , actually attempted to use it as Tadao intended them to. Songs like “Rip It Up” and  show the limits that this original sound could reach. Charanjit Singh’s Synthesizing: Ten Ragas to a Disco Beat might have been the record that predicted the future though. Released in 1982, it connected squelchy TB-303 melodies with tantric beats hinting at some future music only he could imagine then. Now, with so few early adopters willing to devote this much time to using it, the TB-303 was destined to the cast-off electronics bins of the market. Somehow, when it was resigned to death, the TB-303 found a new lease on life.

[Edit Note: An earlier version of this post referenced Imagination’s “Just An Illusion” as a TB-303 track, it actually features a Roland SH-1000 bass line (a truly marvelous one at that). We’ve added Heaven 17’s “Let Me Go” as a replacement on the Spotify playlist in lieu of this change.]

In Chicago and New York, much like the TR-808, the Roland TB-303 — insanely cheap and easily found — had started to slowly take the Dance and Hip-Hop world by storm. In tracks like like Newcleus’ “Jam On It” and Mantronix’s “Bassline,” you hear the 303’s embryonic tone — adding a certain untz to those broken beats — soon to become the sound that would bring it back.

Let’s not debate history. Let’s give momentous kudos to artists like Jesse Saunders, Sleezy D, and Phuture, all Chicago products, for realizing the potential hidden in this much maligned machine. You see, with two waveforms — a sawtooth and a square wave — you’re very limited in timbre. Multiply this with the lack of an actual beefy filter to present something that you’d want to hear on a track, and the TB-303 Bass Line was perfect for its original intention: a bass sound. However, there was hidden potential here. Functions meant to give it the timbre of a fretless bass were discarded for something far more modern and fluid.

By programming simple, alternating patterns you could take advantage of settings found on the TB-303, like Accent and Glide, in ways that were never imagined by their creator. Rather than simply raising the volume of a note, Accent would create a swelling resonance amplifying whatever setting the envelope was residing in. Glide, rather than functioning as simple portamento, would try to anticipate the next note a tad bit earlier than expected. As users discovered, switching these on while twisting the rest of the knobs (particularly the Cut Off Frequency and Envelope Mod) created a slippery sound unheard of in existing electronic music. Then, when distortion pedals or overdriven channels were added, that sound gave birth to “Acid” Techno and House.

We had it synced up, and it was playing some stuff, and I started just tweaking knobs and turning stuff, and Spanky was like, “Woah woah woah. Keep doing that, keep doing that.” So, I kept twisting knobs, and the next thing you know, we were there for like an hour or two, just twisting knobs and programming things. The funny thing is, that first day, we made “Acid Tracks.” It was quite spiritual, to be honest. It was like, that 303 and I connected, in a way that I had never connected to a piece of equipment before.

It may have been odd for musicians then to equate acid rock with this new sound, but as the sound of the Roland TB-303 went Transatlantic in the late ’80s, this idea started to make more and more sense. Although America birthed the “acid house” dance sound, a whole culture started to spring from its sound, especially in England.

Day-Glo smiley faces, glow sticks, semi-controlled substances and the TB-303 became synonymous with the electronic Psychedelic music being created by artists like 808 State, The Shamen, and countless others. Few people could afford Voyagers or M1s, but anyone with a few quid or dollars could lay a beat, tweak a pattern, and move a whole dance floor in ways other genres might not allow.

All of this brings us back to our current era. What drives someone to pay upwards of $2,000 on an original TB-303? What drives someone to add further ill-shaped and mutant enhancement in leagues of TB-303 clones? For sure, club culture isn’t quite the same as when the TB-303 was king. The secret to the TB-303’s mettle and longevity is in that sound. 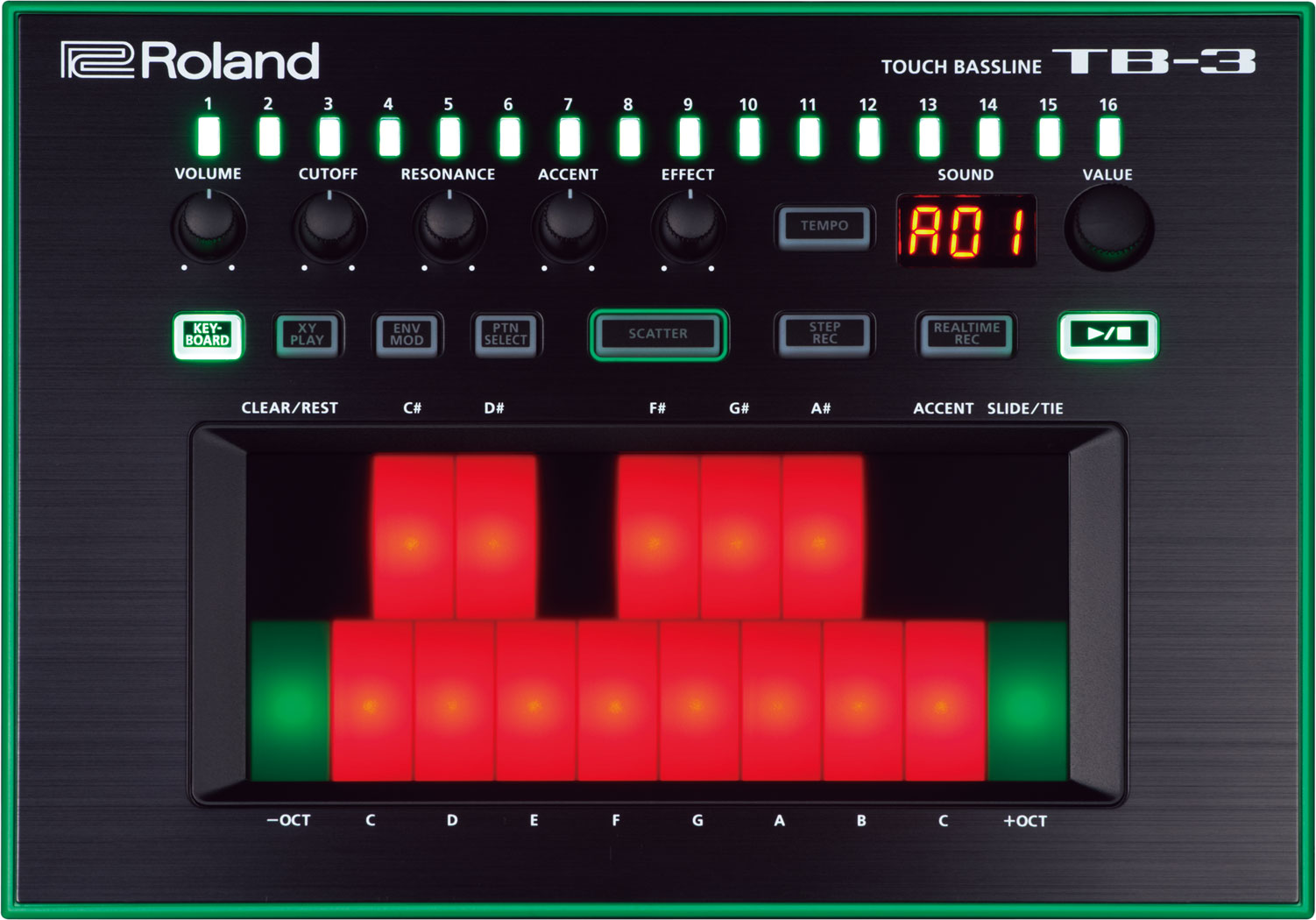 There’s just something about that sound that seems so wrong, but works itself into right. Roland did a brilliant job of capturing that same inspiration in the Aira TB-3. In the end, as much as we try to justify moving on from the Roland TB-303, few instruments invite you to simply set aside the manual and create your own set of rules. Simply listen to our Spotify playlist and you’ll hear what we mean.

Since the writing of the original post, Roland introduced in the fall of 2016, the TB-03 a direct descendant of the TB-303. Nearly identical as the original, the TB-03 includes new appointments like MIDI and USB connectivity, a four character LED display, plus integrated drive, delay, and reverb effects to bring it up in line with modern synthesizers. – ed. note.