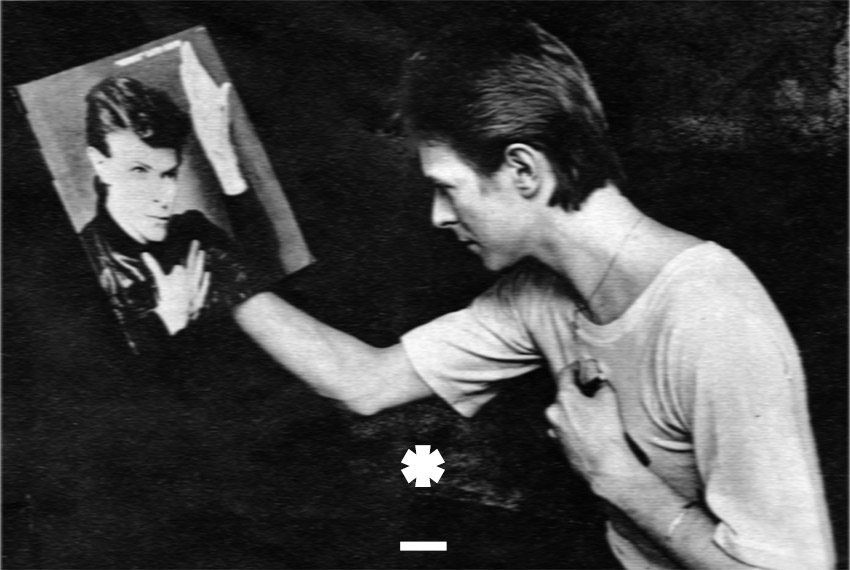 David Bowie will rise again. Much like the biblical Lazarus, I believe it won’t be from his own doing. Something we’ve learned from our modern world is how vast and varied the places and people are that have been touched by his living record. As news of his passing goes around, we start to feel how much denser and grander his influence was on our culture at large. At the end of the day though, for the vast majority of us, the personal pain comes not from any kind of personal acquaintance with the man but from something in his life that changed us. We might not know the man, as others do, and his light may be gone, but the area it resided in, that’s where its gravity remains, still pulling us into its orbit.

Click the image below to take a look through David Bowie’s storied career:

Personally, it’s hard to remember how I went from interested listener into knowing fan. Now I can recite certain facts and explain certain emotions that specific albums, songs, and eras evoke as an admirer of the person himself. But for the most part, I tend to remember how others felt when I tried to introduce them to the man himself. Witnessing that realization of his worth, is what still endlessly fascinates me.

I witnessed this all the time. First, it’s this man is too strange to listen to. Then comes: maybe this man isn’t strange enough, it’s all an act. You’re happy when you hear an instant admiration for the music. But, most of the time, something triggers their shift into that something else. That’s when it’s truly memorable, because you know when it’s meaningful to them too.

For many it was his music, this quicksilver thing that could present something that would reflect back on its listener exactly what he or she was trying to find. For others it was his fashion, itself constantly evolving and questioning boundaries that needed exploration. When one outfit doesn’t work, whose to say adding a different piece or removing certain layers was all it took to make it work. Elsewhere, others admired his acting, itself presenting a side that further grounded the man. Running the gamut from serious to knowingly camp, it presented a side of the man few get to see, one self-aware of his own mythology and more than willing to poke holes in it.

As John & I had very few friends, we felt David was as close as family. Sweet memories will stay with us forever. pic.twitter.com/WoZsztnm4E

No one claims to know him better than any other, but for most of us, I’d wager, when you truly feel the gravity of his orbit, is when you put all of this together…and try to go further. Instead of trying to see what this all means to me, we start to watch videos, turn our ears to deeper, much more personal cuts, and digest interviews to see what it all meant to him. At a certain point, we realize that behind the serious moonlight there was a man never far removed from our own experience. Now, his death only highlights why many of us wept. Although man may go into space, and his music may sound in the heavens, its Earth he has to interface with.

Nothing signals this better than his final record Blackstar ☆. For an artist constantly molding his structure, trying to find its final/best form, it appears finality itself forced its hand on him. Released January 8th, on his 69th birthday, this album couched in reflection, turned David’s scope and focus into that final thing we all struggle to deal with: mortality. Secretly waging a war with lung cancer as he recorded this album, songs like the title cut or “Lazarus” now can’t consciously be divorced from their context. Tony Visconti who produced this album said as much when he stated that “He made Blackstar for us, his parting gift” and in essence was presenting a musical epitaph to knot those final bows.

It’s a striking album showing that after years of quiet resurgence that had already began on 1995’s criminally forgotten Outside, long past the days of matching evolving personas with similar music, only now he had to settle on his current form and chose to leave this mortal coil the only way he knew how. Blackstar ☆ presents his fascination with Astral-Jazz and Hip-Hop, these forms now married to other electronic styles he had a huge hand in creating. It does so in such a shocking way, by once again making Pop music (that ever elusive, communal kind) from misshapen figures in a way that still seriously matters. Of all the songs that stick out for me, the one that sticks out the most is “Dollar Days.”

Nostalgic in tone, hints of melodies from his first hit “Space Oddity” abound, and it seems all this whole new world of progressive Pop music unfolds around it. The song itself alluding to his attempt to stay as a visible source of contention against all of those that need to have their backs pushed against the grain. Beat-heavy and swirling in sonic atmosphere, both of them can be taken as signs that he still has much more to say and further places to go. But like everything in life, this song, quite possibly the final one he ever wrote and sang, displays a knowing acceptance. There’s a point when all these changing forms and structures must stop, coalesce, and be presented in their final shape.

It’s this final shape we can attempt to deconstruct, maybe through recollecting his legacy, but in the end all we can do is try to rearrange its figures and afterglow into a bright, new being that will start this whole cycle again. This all seems obvious now. It’s all there right on the cover, a beautiful belief, even at the end as Bowie states “[He] Can’t Give Everything Away”…

Station to Station: The Many Phases of David Bowie