Tennis on Gear, Gigging and Recording Their Third Album 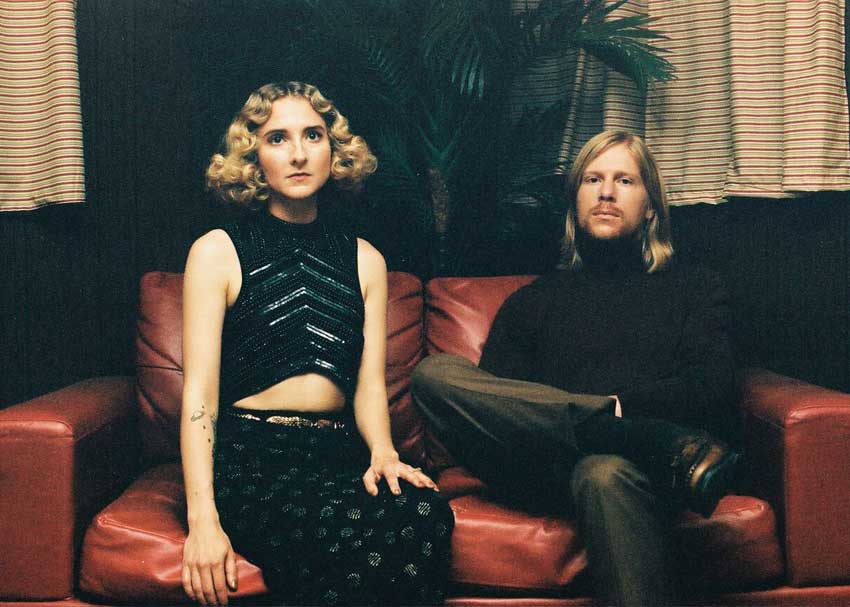 It would be tough, if not impossible, to describe my taste in music in anything short of a rambling, contradictory series of analogies and inept comparisons (“it’s like ____ meets ____ meets ____ with a ____ vibe and a generous spoonful of ____ for good measure” isn’t the conversation most people want to fall victim to being in, I don’t think). I guess I should probably just admit that I’m bad at describing bands succinctly. That’s the case with Denver-based indie pop band, Tennis.

Fronted by Alaina Moore and husband Patrick Riley — leader singer/keyboardist and lead guitar, respectively — Tennis started as the result of an inspired sailing expedition down the Atlantic coast. Their first record, Cape Dory, is predominantly about their adventures sailing, and it’s a theme the couple have revisited often, translating that inspiration either directly or indirectly into the music. To describe their sound almost always includes a reference to the ’60s and/or “the Phil Spector sound” (going back to my heavy-handed approach at describing music), and I sometimes feel like I even get a dose of Motown, specifically with the way Alaina’s voice translates to recording. A week or so into their most recent fall tour, which took them from their hometown, Denver, and through the West Coast, Patrick and Alaina were kind enough to take some time to talk to us about gear, songwriting, touring, and recording their most recent album with members of Spoon, the Shins, and the Black Keys all producing.

zZ: Alaina, you mainly use a Nord Stage, right? What was it about Nord (or even the Stage model, specifically) that drew you in, as opposed to, say, a Yamaha MOTIF or one of the Roland models? 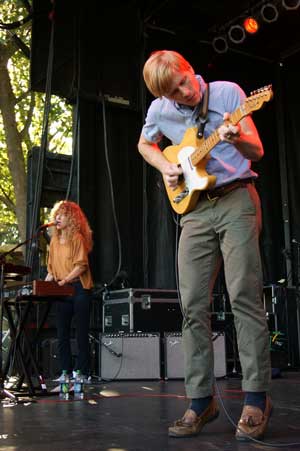 Alaina: I use a Nord Stage 2 but only for practical reasons. I do a lot of multitasking, like piano on my right hand and bass on my left. I used to travel with multiple keyboards but the Nord streamlines everything into one unit.

zZ: Patrick, your guitar looks like some kind of a Fender Telecaster/Jazzmaster hybrid — sorta seems like the best of both based on the pickups, bridge, and neck. Is it a custom build? And if so, what kind of input did you have on the components and specs?

Patrick: It is a custom guitar made by Dan Strain. I originally had a ’90s blonde American Telecaster that I had routed for a Jazzmaster pickup in the neck position; that’s when I realized I also wanted a Jazzmaster tremolo. However, I’m not nearly skilled enough to route a Tele body for a Jazzmaster tremolo, so I talked to Dan about it and he made it happen. The pickups in both of my guitars are Lollar.

zZ: What about amps? I saw you at Lincoln Hall in Chicago a year or two ago (during the Haim tour) and the backline looked like a Fender Silverface family reunion. Patrick, what’s your go-to amp to plug into? Does that differ between recording and touring?

Patrick: For a long time I didn’t want to have a pedal board so I had our local amp tech build in a few mods into my 68′ Princeton. It’s a pretty weird Princeton at this point: it draws 18 watts instead of the normal 12, it has a Germanium gain stage, and a bigger transformer. It’s all subtle stuff, but I really like where it’s at and I use it for pretty much everything. I still haven’t gotten rid of my pedalboard though.

zZ: That’s AWESOME. That Germanium gain stage does a lot to explain the “Tennis guitar sound.” What types of effects — pedals or otherwise — are either of you using?

zZ: I have an MXR Carbon Copy, too, and it’s a staple of my own board. Alaina, your voice has such a rich and soulful character to it, and recordings seem to capture an old school — at times, even Motown-esque — quality to them. Do you have a preferred microphone for recording your vocals?

Alaina: I used an RCA 44 on our first record, an RCA 77 on our second, and a [Sennheiser MD] 421 on all the rest of our recordings. I’m not committed to anything, I’m totally content with a [Shure SM] 58. I have learned over time that the character or timbre of my voice is more dependent on my performance than the microphone I use.

zZ: Since it’s been a bit since I last got to see you on tour, what is your current touring lineup looking like? I’ve seen a few iterations, including one that featured a baritone guitar instead of a bass for a TV performance of the song “Origins,” which I thought was really cool, and – if I’m not mistaken – one version of the band with multiple keyboard players. Do you like to continually mix it up, or have you found a combination that works best?

Alaina: We try to mix it up as much as possible. I feel like a lot of people come to our shows multiple times in a year so it’s good to keep things fresh. I think the dream lineup is a 4 piece band with 3 backup singers…. But then again, that’s a very sensitive stage setup that’s hard to pull off in a festival setting. We were a 3-piece for two years and I miss the simplicity at times. We actually had our input list down to 8 inputs. Who knows what the future holds.

zZ: For the recording of your most recent album, Ritual in Repeat, you worked with Patrick Carney, Richard Swift, and Jim Eno, all of whom are spectacular musicians as well as producers, so that must have been so inspiring. What were some of the memorable differences of working with each of the three of them?

Alaina: After writing Ritual in Repeat, we felt like there were 3 distinct moods in the album. We really wanted to work with multiple producers and play into their strengths and exaggerate the moods. For the simple / powerful songs, we went to Patrick Carney. The 60’s more “classic” sounding songs we took to Richard Swift. For the more intricate / delicate songs; Jim Eno. All three of them are insanely talented in different ways and taught us a lot about production. I think the best part about recording Ritual in Repeat was the continuous amount of new energy put into the album. Each of them had their own energy and concerns. When 2 people write everything in a band, it’s easy to be redundant.

zZ: Alaina, you recently posted on Facebook that you’re engineering the next Tennis record. Do you have any “formal” background with the recording process or are you all self-taught? What kind of recording setup are you using?

Alaina: Ha! That was actually a joke. Patrick and I are self-recording right now, but he’s the engineer. I have to assist him whenever he’s tracking, and I’ve learned a lot but I only ever follow his instructions. I’d love to learn more about audio engineering but when we’re in the studio, I’m already consumed with song-writing and arrangements so I don’t have a lot of mental space left to fill with compressors and EQ’s.

You’re looking at the engineer for our next record. Which explains why the snare track was deleted. Oops.

zZ: I read somewhere that you spent much longer recording Ritual in Repeat than you did with previous records. Was it a sort of change in methods — recording more meticulously, for example — or the nature of more evolved songwriting that required more time? How do you think that will compare with the next record now that you’re engineering it yourself?

Alaina: What changed in our songwriting process was our sense of assuredness. We went from blind confidence to panicked self-doubt. Once we realized how much we were holding ourselves back we were able to work our way out of it. Now we know better than to let ourselves go down that road. It’s about showing up and doing the work, without letting yourself worry about how it will come out. When the songs are there, we can go over them with a more critical eye, but not before we’ve given ourselves the freedom to get to that point.

zZ: It was actually right after Young and Old came out that I discovered your music, and it was through a cover of Television’s “Guiding Light” I stumbled across on Pitchfork before landing on Young and Old. I love that band and you both crushed that song. Patrick, the delay on the guitar solo was sublime. I also really enjoyed your cover of The Zombies’ “Tell Her No.” Do either of those bands hold a special place in your hearts in terms of musical influence? Whether they do or not, who else could you cite as really formative influences on Tennis? Any chance we can look forward to more Tennis-ed out version of classic jams like the two I mentioned?

Patrick: Absolutely. We try and cover songs that influence us as a way of paying an homage to them. I still want to cover a Poppy Family song somewhere down the road but at this point, we have so much of our own material is hard to find time.

zZ: One more for both of you: if money and scarcity weren’t factors, what’s an instrument or piece of gear you’d love to get your hands on?

Patrick: We actually have everything we want. For the kind of music we want to make, it’s more about understanding how to use what you have than acquiring any magic piece of gear. We really learned that from observing Richard Swift in the studio. He can make anything sound good. The only secret ingredient in the studio is him. We want to learn how to work like that.

Check out Tennis on: