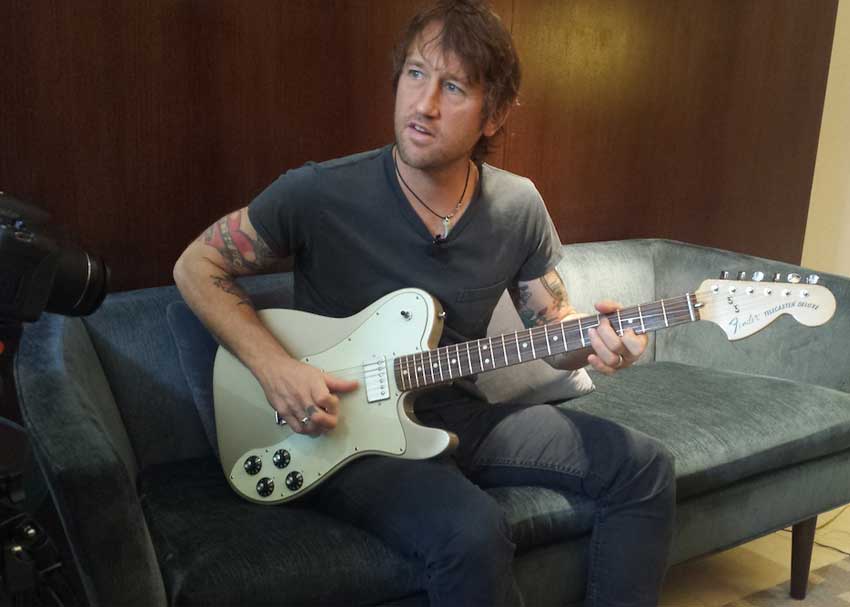 Chris Shiflett plays a few licks during our interview.

For me, it was early 2000, and after hearing (and having my 14-year-old mind blown by) the recent radio hit, “Learn to Fly,” it was Foo Fighters’ third record, There Is Nothing Left to Lose. That album’s release happened to coincide very closely to me getting my first guitar (as a gift. The first guitar I bought with my own money came much later), so as a result, some of the first songs I learned to play were songs from that very album — “Learn to Fly,” “Breakout,” an incredibly poor rendition of “Aurora,” as I not only had an inaccurate tab to read from, but also had no idea at that point what a delay pedal was, let alone what it did.

At this point over half my life later, I’ve been playing guitar just about as long as I’ve been listening to Foo Fighters, so when we heard that we were interviewing Chris Shiflett the day before the band played a sold-out concert at Chicago’s Wrigley Field (home of Chicago’s favorite losers, the Cubs), I was super excited to hear about the influences and methods of one of the guys that more or less taught me to play guitar through his own playing.

The following is a biased, incomplete, and somewhat random (though chronologically ordered) list of five of my favorite songs featuring Chris Shiflett on guitar.

Technically, Chris wasn’t in the band when Foo Fighters recorded There is Nothing Left to Lose, but he joined the band for the tour that immediately followed circa 1999. Most of the time, you’ll find him strapped to his signature Fender Telecaster Deluxe, but for “Stacked Actors” – the first track on TINLTL – he usually busts out a classic white Gibson Firebird for that song only (reason being is that “Stacked Actors” sees the guitars’ E-strings tuned alllll the way down to A so that the song’s main riff can be played in octaves. If you’ve ever tried to play it on your own guitar, it’s crazy difficult to keep that bottom string from being nothing but buzz).

Aside from “Stacked Actors” being a heavy-duty rocker that I always look forward to hearing when the Foos are in town, it’s also a song they usually stretch out to include a wailing, shredding, hamming-it-up guitar battle between Chris and Dave. Jury’s out on who “wins,” but it’s the perfect song to include such a long interlude in before blasting back into the final chorus.

I’m not sure Foo Fighters play this one too often live anymore – a band that has 20+ singles has to carefully choose its setlist for a 25-song show – but when they did following the release of 2002’s One By One, it was one that was sure to get everyone in the crowd moving. (You might also remember MTV refusing to air the music video, which featured Dave Grohl and Jack Black dressing in drag and getting scary drunk in a seedy motel room. What a time to be alive) Aside from being heavy to the point of bombast — which is absolutely a compliment, mind you — “Low” is one of the few songs that features Chris Shiflett on backup vocals. It’s nothing crazy – no complicated harmonies or counter-melodies; just a simple call-and-response in the second chorus – but it was awesome to see that the guy with the killer lead guitar chops also had a decent set of pipes. He doesn’t sing much with Foo Fighters, which is a shame to some degree, because his vocals in Chris Shiflett and the Dead Peasants (as well as the former Jackson United) should not be overlooked in favor of his obvious guitar prowess. The guy can sing.

Foo Fighters are one of my favorite bands and a huge, formative influence on my taste in music and my own playing, so my “favorite” song of theirs varies with whatever record of theirs I happen to be listening to. However, one that’s recently stood out to me amongst their 20 year catalogue is “Long Road to Ruin” from 2007’s Echoes, Silence, Patience and Grace. This album followed an incredible acoustic tour they’d done the year prior and the softer side of the band absolutely influenced Echoes. Along with more acoustic guitar, though, came a much stronger country vibe, and given the band members’ individual backgrounds and influences, I have to think a large part of that came from Chris. “Long Road to Ruin” stays right in the pocket of Foo Fighters’ rock ‘n’ roll wheelhouse, but with a distinctive twang present in the lead guitar. Add to that one of Shiflett’s best Foo Fighters guitar solos and you’ve got a song that won’t soon leave the Greatest Hits rotation.

This song is actually from Chris Shiflett and the Dead Peasants’ eponymous debut album, and possibly the band’s most popular song. It’s easy to see why; it’s catchy, it’s anthemic, and it adeptly bridges the gap between the Chris Shiflett we all know and the one he wants you to get to know. There’s an unmistakable pop punk vibe – I thought of Jawbreaker the first time I heard the song – along with the bends, organs and other mellow frills of an alt-country tune that’ll get stuck in your head the rest of the drive to wherever it is you’re going. Any doubt you might have had that Chris Shiflett has the country chops to match his stadium-filling sound will evaporate when you hear this song.

My appreciation for Chris Shiflett’s guitar part in “White Limo” – an almost non-sequitor to the rest of the band’s recent work provided you’re unaware of the guys’ punk and heavy metal roots growing up – could probably only come from someone whose exposure to the band’s music probably totals into the thousands of hours. It’s not an uncommon duality in a two-guitar band that Foo Fighters occupy – others I can think of offhand are The Stokes, Arctic Monkeys, oftentimes Queens of the Stone Age – and it’s not a surprise as to why: a semi-hollow guitar and a solid body just WORK well together. It’s often the case that the archtop handles the cleaner, richer sounding chords while the solidbody (more often the lead guitar) takes on the heavier distortion tones. Such is the case on the quite heavily distorted “White Limo.” While both guitars see the gain ostensibly maxed, Shiflett’s takes it the extra 10%, as heard by the buzzsaw tones buried just beneath the rest of the band. It’s the perfect complement that adds the right amount of texture to the otherwise booming, blasting bombardment that two other guitarists, a bass player, and a virtuosic drummer provide.