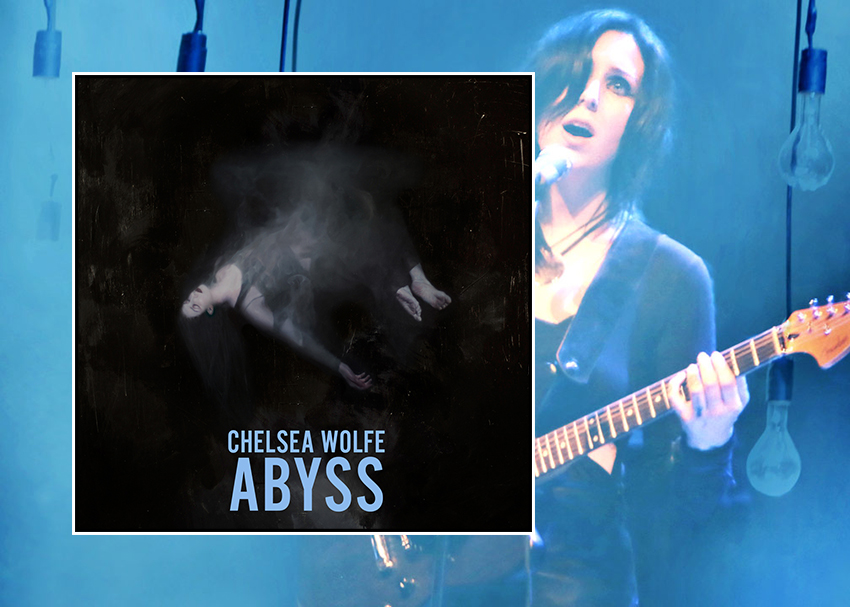 Synth-heavy bass chords, each ending abruptly and eerily, open Chelsea Wolfe’s 2015 album Abyss. You’d almost think you were listening to some resurfaced soundtrack for 1997’s cult sci-fi epic Event Horizon if it weren’t for the eventual build-up of industrial doom metal and Wolfe’s haunting voice crooning like some kind of space siren. Maybe this is a sci-fi soundtrack after all.

Chelsea Wolfe is no stranger to dark, uneasy vibes and this record only takes things deeper into that realm. The album’s second track, “Iron Moon” might just crown the LA-based songstress queen of the quiet-loud tactic — with huge, fuzzed-out, downtempo riffs giving way to a single clean guitar and Chelsea’s nearly dry voice within the first 30 seconds. This arrangement and instrumentation on Abyss is deliberate. Certain moments lie in stark contrast to others, and often, parts are built up into clamorous discord before resolving in lullaby-like drones. Much of this approach can be linked back to Wolfe’s everyday issues and her real life struggle with sleep paralysis. According to the press release for Abyss, one of her goals with the record was to musically represent the feelings brought on by sleep paralysis and the sensation of not being fully awake. In her own words, she wanted the sound to reflect a “hazy afterlife… an inverted thunderstorm… the dark backward… the abyss of time.”

Enlisted to make this sound a reality were members of Chelsea Wolfe’s touring band: co-songwriter, bassist and synth player Ben Chisolm, drummer Dylan Fujioka and violist Ezra Buchla. Two of my favorite guitarists, Mike Sullivan of Russian Circles and D.H Phillips of True Widow, also made contributions to several songs on the record, aiding in the overall post-metal and doom atmosphere. This dream team’s influence is evident throughout the LP, but it really shines in tracks like “After the Fall” with every instrument slowly building up over pulsating synth and drums.

As a tone junkie myself, I really appreciate how all of the parts on Abyss play with each other. From fairly straightforward reverb and fuzz guitar parts, recorded on Gibson Midtowns and Fender Jazzmasters, to some of the more off-the-wall synth triggers created from cuts of Chelsea’s voice and Ezra Buchla screaming into an amplified viola; extremely thick textures are continuously built up and deconstructed throughout. I’ve listened to this record several times now and have come to two different conclusions: I can actively listen to all 55 minutes and notice something new every time, or I can sit back and let the spectral drone of Abyss lull me into a state that’s somewhere between sleep and consciousness — which might be what Chelsea Wolfe is after.