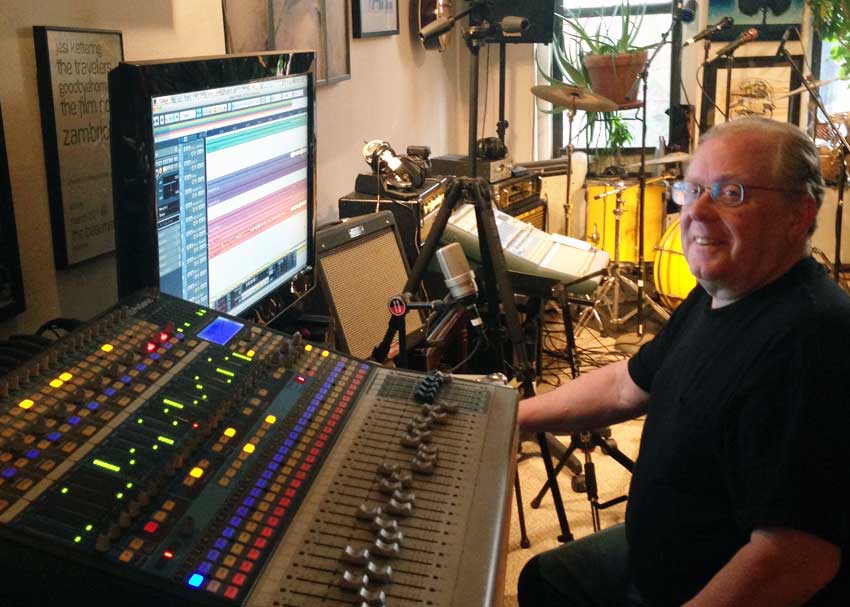 In his quest to capture the work of unknown artists, CAU podcast host Michael Teach has crammed his modest Chicago apartment with musical instruments and recording equipment — much of it collected at yard sales!

Take a closer look at the gear that Teach and the Chicago Acoustic Underground crew use to record live performances and share them with the world. 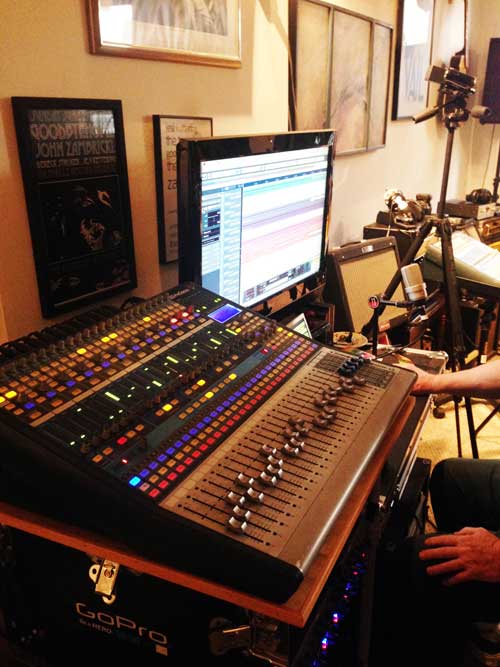 The heart of CAU’s living-room recording rig is the PreSonus StudioLive 24.4.2 console.

“The PreSonus StudioLive board was the first different thing I’d seen in digital processing that I liked. As we learned doing some live shows with it, the Fat Channel lets you set your mains, and you push a button and suddenly you’re able to set monitors individually. And of course, the pres are all Class A pres. It’s 100% reliable — it’s never broken down. We’ve used it on all sorts of live shows — outdoors, rain, all sorts of stuff — and it’s been flawless. And the beauty of it is, you just go out from the board into your computer via FireWire, and it supports all 24 channels with zero latency.” 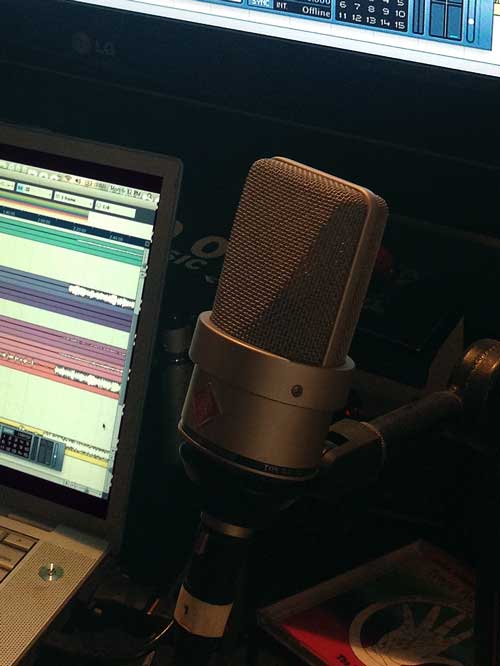 When you hear Teach interviewing artists on the CAU podcast, you’re hearing the Neumann TLM-103 large-diaphragm condenser mic on his desk. Teach records the show with his MacBook Pro running Cubase.

When asked about his mic and preamp collection, Teach waxes historical.

“Over in the other studio, I’ve got three Avalon 737s, one 747, a Neumann U87, a couple more TLM-103s, and a Gefell. The story of that is, when Germany split, Neumann was on the West side of Berlin, and Gefell was on the East side of Berlin.” 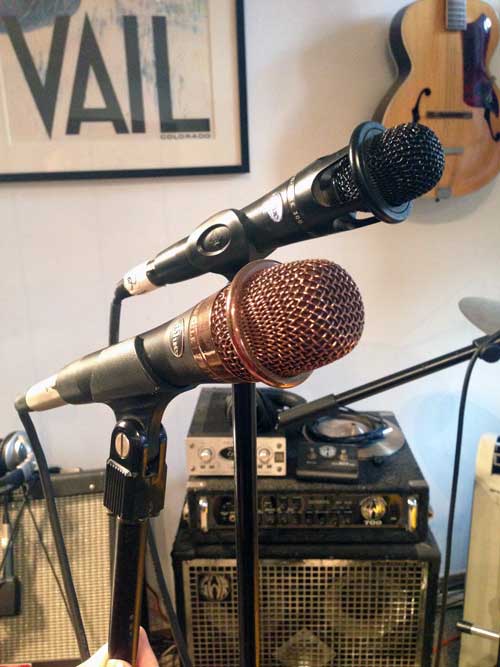 If you hear a vocalist on the Chicago Acoustic Underground podcast, you’re likely hearing one of these Blue vocal mics.

“I just fell in love with Blue enCORE 300 and enCORE 200 microphones because their side rejection is just incredible. And in a small room like this, that’s really important.” 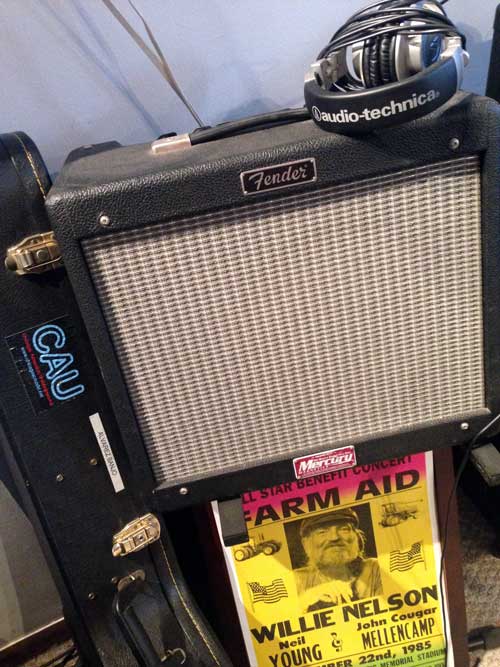 Not every artist on the Chicago Acoustic Underground podcast plays “unplugged.” Electric guitars are typically recorded with one of the tube amps in Teach’s collection.

“Both of those Fender Blues Juniors are modified with Mercury Magnetics Class A transformers and power output transformers. Those things are just tone monsters,” Teach said.

As for the vintage 1985 Farm Aid concert poster? 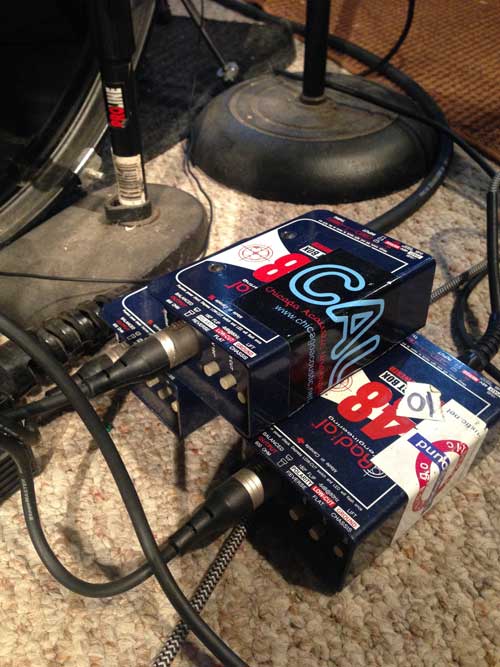 If you hear an acoustic guitar on the Chicago Acoustic Underground podcast, it’s likely plugged into one of these Radial J48 direct boxes.

“I love the Radials. Incredible sound. We use those like crazy. I’ve had plenty of people who have come in and said, ‘I have my own DI.’ And I say, ‘Well, I’ll tell you what — plug into your own DI, and then I’ll plug it into the Radial, and you tell me which one you want to use.’ And they want to use the Radial. That Radial DI is damn close to the Avalon U5.” 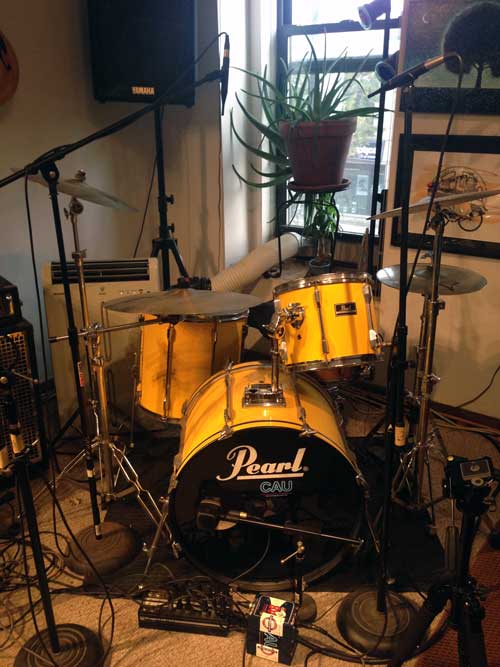 “Every Saturday, I go yard sale-ing with a couple friends of mine,” Teach said. “The drum kit literally came from a yard sale. It’s the Pearl Export kit, but it’s the Japanese kit, before they moved it to Taiwan. I have a different snare on it now, but that whole kit was $100 bucks. It was still in its wrappings. That was a great find. I have two other drum kits, but that one is the one everyone wants to play.” 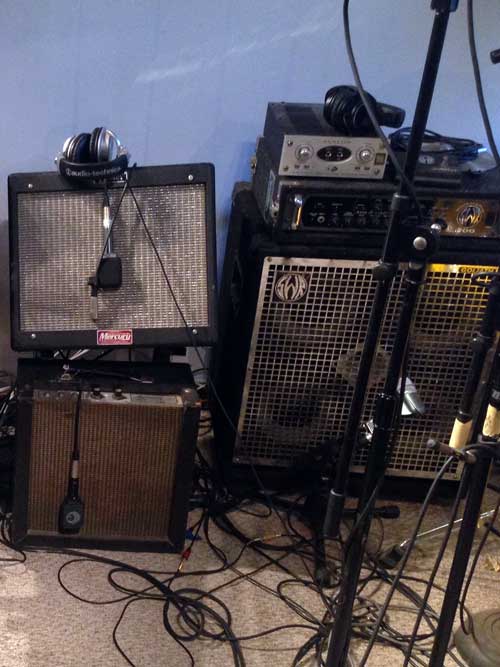 Teach has a collection of guitar and bass amplifiers — as well as a very special DI box.

“I use the Avalon U5 DI specifically for cellos and upright basses,” he said. “That thing on an upright bass is unbelievable. You can dial in the tone so beautifully, either miked up or from the DI.”

For electric bass, Teach prefers to move some air. 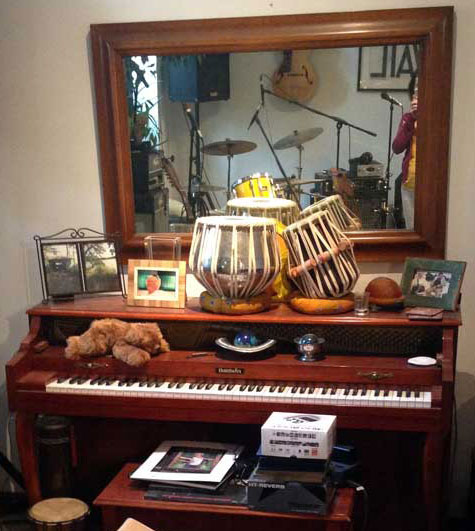 Perhaps the most “vintage” piece of gear in the Chicago Acoustic Underground studio is the 1953 Baldwin piano, which had belonged to Teach’s mother.

But when you hear an artist playing keyboards on the podcast, you’re likely hearing another secondhand find:

“It’s a Nord Electro 3. I searched all of the musical instruments on Craigslist, and this one popped up way the hell in the south suburbs,” Teach said. “I drove 35 miles. I walked into the house and said, ‘Do you still have the Nord?’ And they went, ‘The what? Oh, that thing that’s red?'”

“I said, ‘I’ll work you a deal: I’ll buy that Nord, and let me re-price every other musical thing here for what they’re really worth.’ So I ended up buying the Nord, with the case and everything, for $700 bucks.”