Get the Tone: The Berlin School of Electronic Music 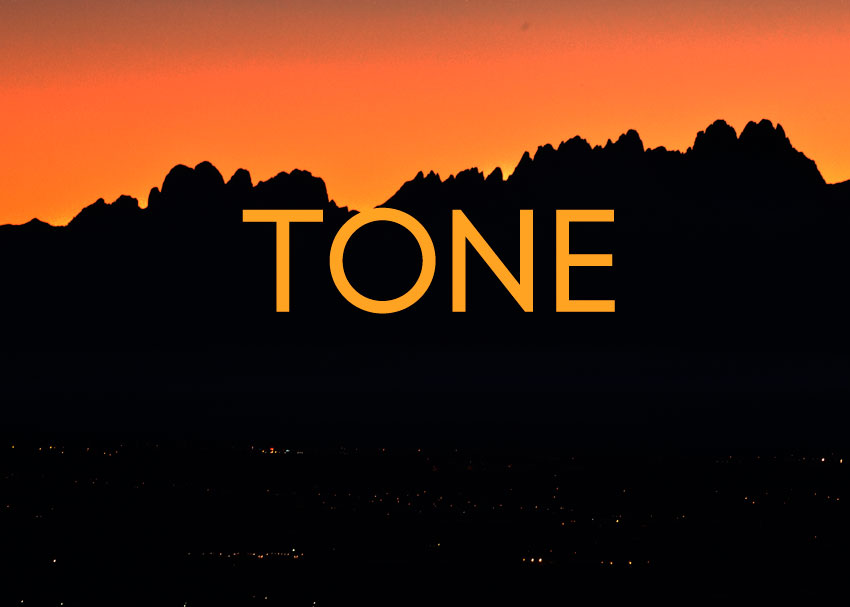 They say the enemy of good art is the absence of limitations. We’ve heard this in the past, with artists like Tangerine Dream and Manuel Göttsching, who by necessity, used workarounds to real life technological limitations as ways to create their own brand of music. How? By taking simple techniques and applying it to the musical tools they had. The two tracks I created, one in homage and the other in a more contemporary manner, were guided by like-minded principles. To do the same.

What I’m attempting to capture in this post is how to get beyond some of the similar limits we might face and discover some unique workarounds to get to that sound. What’s the sound today? Its the sound of classic Berlin Electronic School of Music. For this task, my recording software of choice was Ableton Live, but I trust you’ll be able to translate the following ideas elsewhere. An Ableton Live template is provided at the end of this post to get you going.

Lets begin by disassembling some of the basic musical ideas heard in the Berlin School of Electronic Music. This is what I believe they are:

Trying to get at those musical concepts led me to create this instrument template. As always, if you don’t have the same instrument, do your best to find a similar or like-minded replacement. I tried to be as period “correct” as possible, but nothing should stop you from straying further in experimentation…

Since these effects might be new to a few of you, let’s picture them in a different way than you’re used to. I’ll shamefully steal the imagery of Monkey FX’s nifty audio effects guide to explain what these effects do. 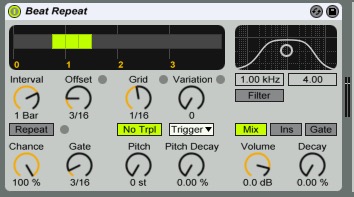 Imagine we have trained monkeys who repeat everything we say or perform. Imagine we ask one monkey to help us out here. We ask the brightest monkey from the troop to do something different.

Rather than listen, and repeat back to us each interval or bar of music we play (via an Interval knob), we ask her to listen intently to the third beat of each measure (via an Offset control). When she hears the third beat in the series, she will repeat whatever note she hear exactly three times (or more depending on what we instruct her via the Gate knob) and then continue on, repeating everything else back as normal.

This monkey is so smart, that she can be instructed how many times she must land on that exact beat (via the Chance knob). However, for now, though, we’ll ask her to pretend she’s a robot and land on it exactly, without fail. Although she has other talents tied to her remarkable memory, for now that’s all we’ll ask from her.

Since our smartest monkey can’t do everything she’s asked one of her best friends to help us out with something else. She tells us that this monkey has a much shorter attention span than her. Unfortunately, for us, she doesn’t say how short. Ok, you start playing with her and that’s when you notice something.

Rather than wait one bar to hear what you play, she’ll try to copy you note for note, as you play. For today, that’s fine, this is something you can live with. She is pretty much in sync with you, so all’s well. However, as you sit next to her and get ready for your next performance another monkey appears. Its her twin brother…and he wants to play.

This brother of hers, although identically the same, has always tried to be cooler than his sister. Rather than sit next to you, he sits opposite her (something having to do with human cooties…). And rather than listen to you, he’d much rather ask his sister to tell him what we just played. In doing so, you hear a noticeable delay in his playing.

He is relentlessly accurate in annoyance. At first, like clockwork, you hear his guitar playing back to you what you played 1, 2, 3, 4, or more notes ago. Luckily for you, his sister is smart enough to know what to do to control exactly the interval of time he repeats this question. And for this session, he must wait three beats.

Although you hear him coming, back and forth, to the right (and sometimes scoothing to the left) of you, its in a way that’s useful. His sister has found a way to make him steady, and you know exactly when you’ll hear his repetitions. There are more things she can get him to do but for now that’s all we need from her.

After a while, we’ve grown a bit tired of that little brother of hers. So, we imagine that there’s something he can do for us to make his time here feel a bit more appreciated.

We tell him to do what he was doing a moment ago, but take a microphone and his instrument a bit further, elsewhere. He is an inquisitive type, so anything from a cavern to a small bucket seems to be fine with him. Wherever he goes his microphone can pick up the reflections and waves of sounds that bounce back to hims as he repeats our playing.

Our imaginary place is huge, but we’re nice today, and send him to a medium-sized room, where his microphone can pick up a couple of sounds more pleasing to the ear.

Now imagine all of these symbolic monkeys mentioned above transforming into zeroes and ones, turning into pint-sized software versions of themselves. These will be the most important sound effects we’ll use to get our Berlin School sound.

1. Create A Bass Line
2. Bend Time and Space
Here’s where those effects we spoke about before come in. Rather than use one track to do all our effecting, we’re going to route the output from the “Moog Bass Line” into two new Live audio tracks.

Now, now this is getting even more interesting. Can you hear the subtle change?

We just added a quick repetition after the first initial beat. What this does is in effect add some sort of accent or stress to that the original, almost mechanical melody. Now we have dynamics where we didn’t, before.

Echoes of Ashra’s “Night Dust” are starting to form in my head, and we’re starting to get closer to a classic Berlin School sound…but there is one more thing that still eludes us. It’s something uniquely theirs.

3. Ratchet In the Year 2015
You’re probably heard of the term ratchet in some way. Its something hard to quantify and in certain aspects hard to explain unless you’ve heard the sound first. First of all, break out a copy of the Thief Soundtrack or visit Youtube and listen to a snippet of “Diamond Diary“.

Of course there’s that cyclical, evolving sound we’re sorta getting at…but there’s something else. At the 2 minute mark, a series of notes seem to swiftly disengage from the main cycle and repeat themselves, in clear steps. Some say it sounds like the springs of a door stop springing but its something once heard you’ll never forget.

Conceivably, the way Tangerine Dream arrived at that sound was by using one modified sequencer module to feed multiple, distinct lines of tempo to their synthesizers. With one sequencer they were be able to activate a switch, pick a specific note, and instantly send out a dialed in amount of note repetitions, at a set speed. Out came back that very distinct percussive-like repetition well know now.

Of course, this is the stuff people spend oodles of money to try and replicate with modular hardware sequencers. However, for today, we’ll try to do so, at a much lesser expense.

Take it From Here:

1. Add Some Rhythm
Note: What I do onwards from here is based on instinct rather than technical methods. Our sonic foundation, those Effects Sends and Master Track effects, should give your musical imagination enough support to experiment. How did I continue? With drums of course:
2. Lead with a Harmony or Vice Versa
These were the instruments I added to the mix to create changes in mood and feeling.

Classic string machines are truly complementary instruments to any Berlin Electronic School-style bass line. I purposely limited the main spine of the song (the Moog Modular’s bass line) to a monophonic software instrument. Reason being, the Arturia’s Solina V allows me to add harmonic polyphonic sounds in a way that seems more appropriate than using it as a mere pad device.

The [Soft Brass] patch with some minor setting adjustments burrows, shines, and slinks when/where it ought to, at least for me. If we’re thinking about the mix holistically, this is who we’re making room for.

Again, variations on the main melody… 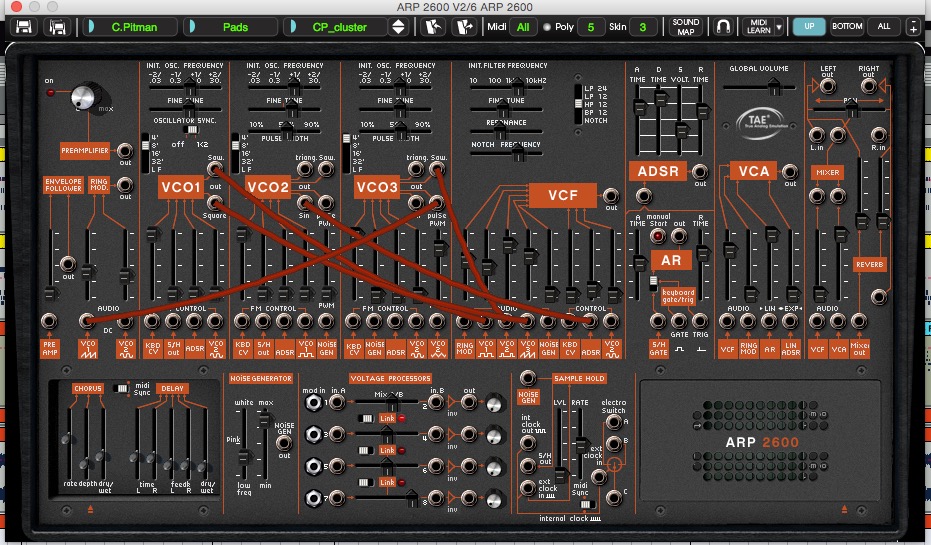 The Arturia ARP 2600 V, on other days, would have taken the place of the Moog’s bass lines. Today, though, it’s playing the role of friendly foil, acting like an authoritative, slightly nasal reminder of an analog past. The [CP Cluster] patch is great for this.

Reinforcing the root note, of course… 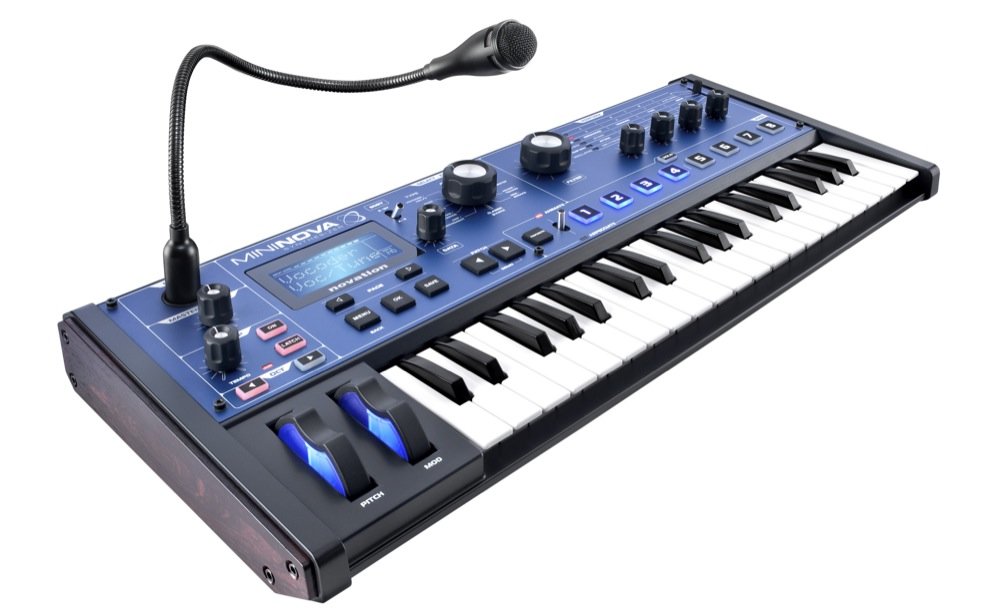 This is my own trickster sound. I forget which patch it was, but it was a variation on an electric piano [Something-Ballad]…don’t quote me on this though. My aim was to make its release extremely short, to the point of truncation. Sufficiently truncated, I ran it directly to the Scarlett and into Live’s External Audio Input.

This is what’s important.

Using its on-board Arpeggiator, I’d quickly note the root of a specific, notable passage from the main arrangement and overdub this arpeggiating sequence into the mix. Using the MiniNova’s arp pads I was able to turn off specific or random beats from the single note repeating eighth-note arpeggio sequence and in essence achieve a poor man’s Beat Repeat.

What I did isn’t something that you want to pepper the song with, but for embellishment, here and there, it works. 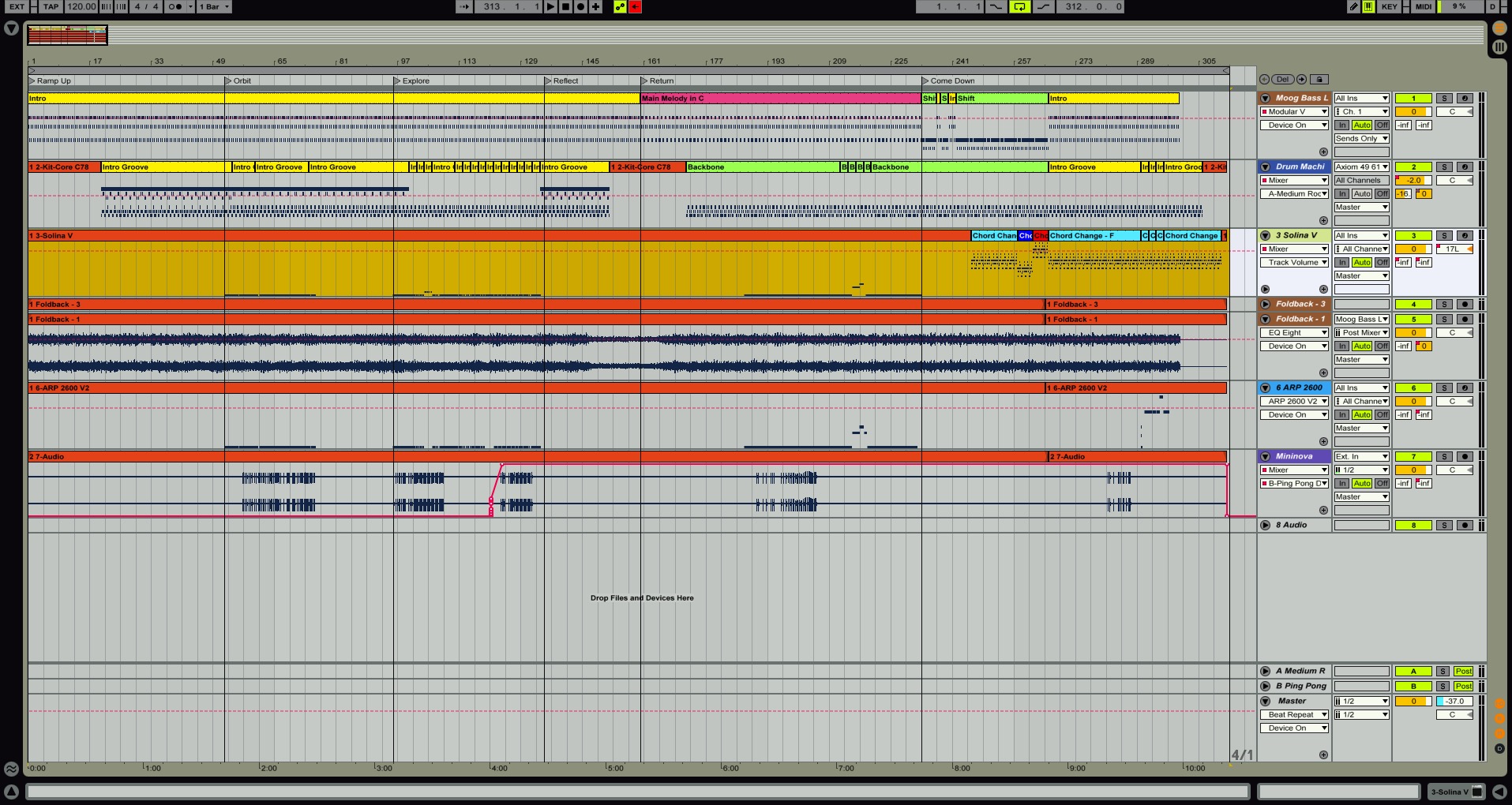 Some of the feelings projected by the performance of Berlin Electronic School-style music are directly tied to letting sequences and clips run freely. Here are some final thoughts: