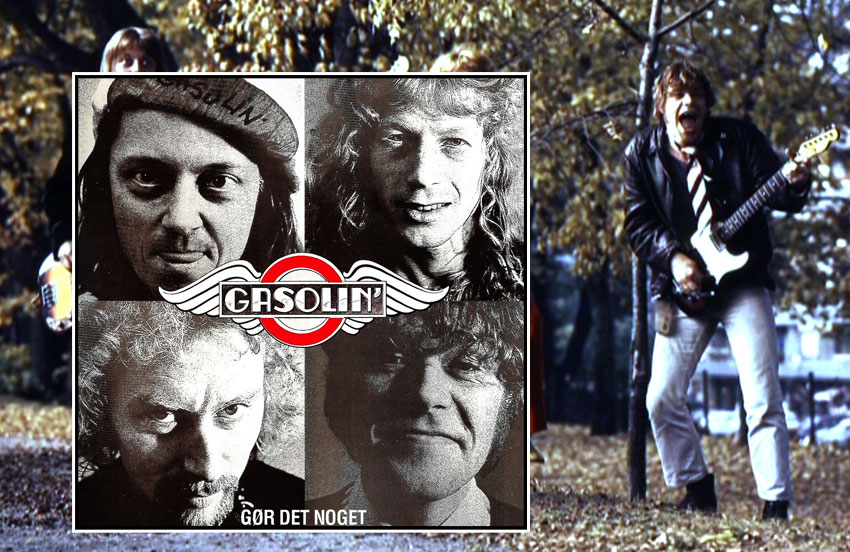 In 1971, young singer-songwriter Kim Larsen (vocalist/lyricist), together with Wili Jønsson (bassist) and Franz Beckerlee (lead guitar) started a fledgling band in the Copenhagen neighborhood of Christianshavn. From 1972-1978, they went from being promising Danish protest rockers into behemoth, hard-chugging boogie rock visionaries. Early albums released from Gasolin’ 2 through Gasolin’ 5 showed them picking up and mixing all sorts of influences from Status Quo, Roxy Music, and Dylan into their unique blend of Scandinavian hard rock. Kim Larsen’s distinct on-stage demeanor and equally visceral, bordering on aggressive singing brought to mind a slightly more affected Lee Brilleaux from Dr. Feelgood. Somehow, their rebellious gung-ho driving rock struck an immense chord with their Danish audience. Swiftly those albums became instant best-sellers in their native Denmark.

By 1975, after releasing the manic proto-glam-punk of Efter Endnu en Dag, (After Another Day) Gasolin’ tried to test their powers and see if they could outgrow their Danish market. Resigning with their first label, CBS, they tried to right some wrongs. Just four years before, CBS had dropped them after a series of unsuccessful English-language singles moved no one. Now, here they were, attempting to translate their Danish lyrics (at CBS’s request) from Gasolin’ 5 into a language that didn’t quite suit their sound.

No matter, if fellow Scandinavian band ABBA could be forgiven for their slightly askew vocal phrasings and still be huge stars why couldn’t they? Gasolin’ were also nearing peak power. Putting nearly 1.2 million of their own Yankee dollars into What a Lemon, they headed to America on the heels of a glowing Robert Christgau (dean of rock criticism/Village Voice) review of the album. Pittance ticket sales and even worse album sales swiftly sent them back with their tails between their legs unprepared for what was coming. If this was a humbling, they were going to experience it firsthand.

Picking the worst time to release a distilled version of their truly original brand of hard-nosed Art-Boogie, Gasolin’ were lost in the crowd of less-nuanced Aerosmiths and Led Zeppers. In experience, the likes of the Ramones (a band they witness perform in person) further let them know they had the wrong delusions of grandeur. When they came back to Denmark, monetary problems, internal squabbles, and resentment threatened to filter through their next album. Knowing that they probably had lost their last chance at world stardom they had to resolve to find another path. Forgoing the production work of Roy Thomas Baker, who had used his work with Gasolin’ to kickstart the bombastic sound of Queen, they chose to go back to Copenhagen with a streamlined sound: garage-rock; working with little-known engineer Flemming Rasmussen (who could be argued taught Metallica a thing or two from these sessions) they set about creating a true forgotten masterpiece.

Forget about finding this in your local shop, never released in the US (our loss, for darn sure!), but thankfully with the rise of [insert your favorite streaming music service] you can now listen to the perfect testament to what Danish Rock could be. Gør det Noget, released in 1977, provides nods to where punk and alternative rock could travel in the future. Sung almost entirely in Danish, Kim and the boys use an assortment of sonic toys and musical machines to create something a Golden Earring or a Steppenwolf couldn’t…a slice of boogie rock that whipped the neck as much as the mind. It’s what also made it, appropriately, their swan song. This is how I imagine rock music should be: a sound that is all-seeing, all-conquering, and above all else soaring, and never a quest through the muck or the dirt of needless distortion for heavy’s sake. What does this mean? It means “Jumbo Nummer Nul”

In 3 minutes and 33 seconds, a torrent of driving musical sound thrusts the listener into the Motorik-via-Country Roads intertwining slide and throttle guitar sound of new-look Gasolin’. Sure, Status Quo could have tried to reach the pure adrenaline rock glory of Gasolin’ here (in 6 minutes)…but Gasolin did so, in such a whiplash pace and time that was unheard of. It’s enough to make you say: knock it back. Then, to show that they don’t have just one tempo, Gasolin’ unfurl sounds and vistas that art-punkers like the Stranglers would have killed for like “December in New York,” glimpses of Brit-pop that Pulp would mine a decade later (see “Place St. Michelle”), the Brian Eno-like “King’s Lead Hat”-aping, or should I say vice-versa, pioneering art-dance-punk of “Strengelegen” which could be “King’s Lead Hat” in reverse. If Boogie Rock had its Abbey Road, this was its place. Over the course of 38-some-odd minutes, and in 12 songs, some kind of vital primal rocking gets reconfigured in ways only Kim and the boys could imagine.

By time you hear the outstanding Ambient E-bow folk and primeval grunge of “Kattemor,” as a listener you just have to tip your hat and hope some sort of wisdom shines some light onto why “Bob-Shi-Bam” sounds like Iggy Pop’s “Mass Production” being remixed by Andy Gill. Twinkling, angular guitars shouldn’t be so simultaneously posterior-kicking, dangerous, and dare I say “beautiful” alongside Kim’s guttural voice…then again it does, then again it did, and now I’m here, stuck, at a loss for words, trying to convince you to listen to a Danish rock album released more than 30 years ago based on a slice of brilliant Art-Funk that has no realistic business being made by anyone bordering the Baltic Sea…More foolish, Quixotic attempts than mine have been made for lesser albums in rock canon, and yet here I am, trying to find someone else to join me for another round of “Kina Rock.” Remember what I said about them being the Danish Beatles? Now, do you mind tilting at those windmills with me?

Machinst! - PronegativeBehind the Mic: Interview with the Shure MOTIV Engineering and Design Team