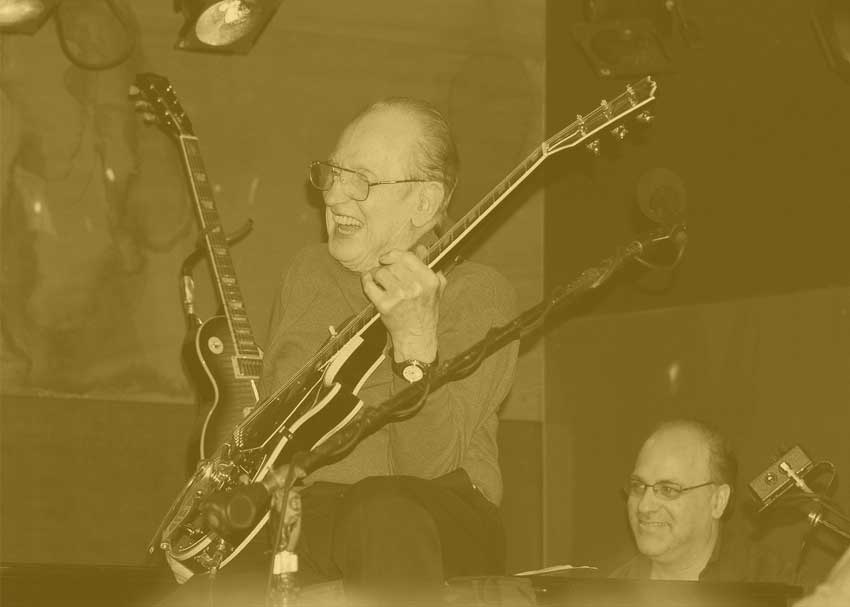 Today, Les Paul (born Lester William Polsfuss in 1915) would have turned 100 years old — but that’s certainly not to say that he didn’t leave a momentous legacy behind after his 94 years.

Guitarists (and many non-guitarists) surely are familiar with his namesake guitar, first produced by Gibson in 1952. From those early “Goldtop” models sporting P-90 pickups and trapeze tailpieces, to the “holy grail” 1958 models, whose iconic burst finishes are only matched in their idolized status by the tone of their revolutionary Patent-Applied-For humbuckers, Les Pauls have set the standard for solid-bodied guitars for over six decades now and have served as a platform to a number of innovations that always make waves in the industry. So crucial to guitardom is the Les Paul model, that countless artists have been honored with their own signature version of the instrument. It’s a testament to the Les Paul’s status that we don’t even think twice at how odd it is to have a guitar named after two people, and that incarnations like the Slash Les Paul or Zakk Wylde Les Paul have gone on to spawn followings of their own.

But none of that should take away from the genius of Les Paul himself. As a guitarist, he brought together western swing, blues and jazz all with the glue of his virtuosic guitar playing. Starting with is Django Reinhardt-influenced swing style in his Les Paul Trio in the mid-1930s, to performing with his wife Mary Ford in the ’50s, all the way through his final days, the “Wizard of Waukesha,” Wisconsin would go on to influence scores of guitarists and thrill fans.

As monumental of an impact Les Paul has had on guitar culture, it’s only part of his legacy. Les Paul is just as revered for his contributions to the recording industry. Upon meeting and performing with Bing Crosby, Paul was urged to start his own studio by the crooner and did just that, recording greats from Andy Williams to W.C. Fields. Crosby sent Paul the first Ampex tape recorder, onto which Paul added a second recording head, letting him record multiple tracks onto one tape, which would lead to a technique that remains the standard today: multitrack recording. In an effort to differentiate his sound from other guitarists, Paul even developed recording effects like overdubbing and phasing. All this was accomplished before the Les Paul model guitar ever surfaced!

So today, let’s celebrate a century (and counting) of advancement in music by honoring Les Paul’s 100th birthday. Bust out a few licks on your Les Paul, take a listen to any of his vast list of recordings, take a minute and realize how much this man’s innovations have impacted your own recordings, or simply check out the video below and smile at the classic line dropped by Les Paul in this commercial.