Touch That Dial: Three Overdrive Pedal Tricks for the Studio! 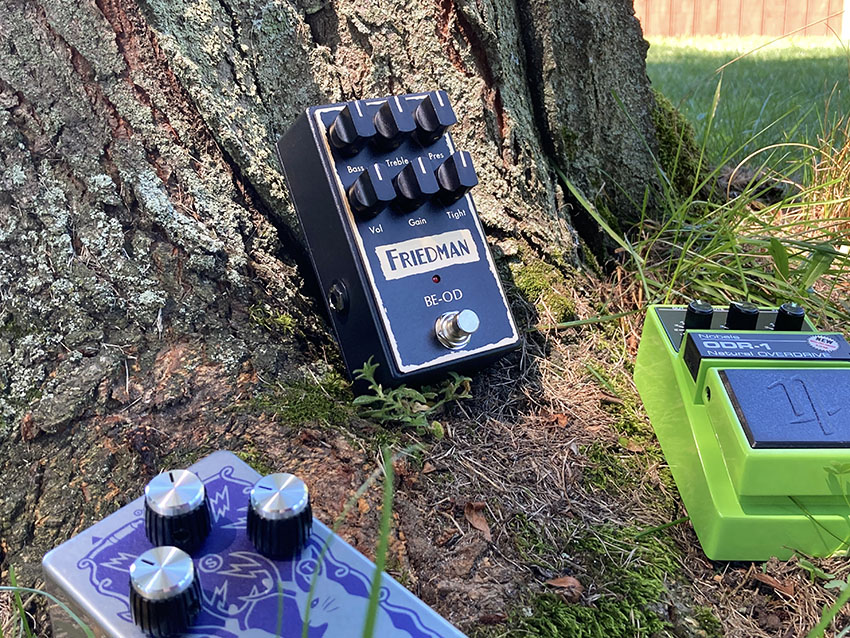 Nearly every pedal company offers an overdrive effect. It’s a decently simple circuit to create, and there are a ton of variations available on the market today. From the first overdrives that were built to emulate tube amp breakup, to the modern active EQ-equipped studio darling ODs, overdrive pedals can serve a higher purpose on your pedalboard when it comes to tone crafting. Here are three studio tricks for any overdrive pedal owner to master!

Get More Out of Your Fuzzy Fuzz

Most players know that your signal path is incredibly important when it comes to what you want to hear coming out of your amp’s speaker. But fewer know that interactions between pedals in your chain can create unique, interesting, and incredibly useful sounds all based on where you place them. For instance, fuzz and overdrive are on a ton of pedalboards around the world.

Fuzz is untamed, wild, and offers sustain that seems to never end. But what if you want the “fuzziness” without the unpredictability when it comes to note definition? That’s where your overdrive pedal comes in.

Typically, a player would place an overdrive pedal before a fuzz in the signal chain. This is essentially driving a dirty signal into the fuzz, creating an even dirtier, more fuzzed-out tone. By placing an overdrive pedal after the fuzz, you’re essentially boosting the fuzz but also allowing for additional EQ and gain adjustments to take place on the overdrive pedal. This can allow for both increased dirt like the previous method, increased tightness and volume for solo sections, or just a more defined, cutting guitar or bass tone. This handy trick opens the door in nearly any genre, but really shines in rock and metal where how you stack dirt matters.

Stack Your Drives for a Unique Tone

There are hundreds of overdrive pedals on the market today. Some are clones of other circuits, but most can agree that each has its own tone and flavor. Sometimes these drive tones are instantly recognizable, like that of a transparent overdrive or a vintage 808 drive. But what if you want something totally unique, or you want the ability to further tweak and clean-up a drive that you use often? Well it’s as easy as stacking your pedals.

First, place two overdrive pedals together in a signal path. Much like a distortion-style circuit, the first stage/pedal is influencing what the gain overall is doing and which frequencies are being clipped. The second pedal in line is adding gain and reining in the overall EQ. So whatever pedal is second in line will dominate the overall character of your tone. The best thing to do is experiment at this point. You can fatten up a thin-sounding overdrive with a bass-heavy one second, or vise-versa. It’s all about what you want out of your tone and overall mix!

This trick requires two overdrive pedals to be chained one after the other on your board. Luckily, overdrive is typically the most affordable effect to purchase, so it’s easy to collect a few OD pedals over time, via trades, or by simply buying a new “flavor” OD from your current one.

One of the most fun ways to add a ton more clipping to your favorite overdrive circuit is to increase volume in the first pedal in your stack. Let’s say you’re chaining two overdrives with slightly different tones: the first pedal in line will not add much, if any volume to your signal when you turn the volume knob up. It will instead add more clipping to your tone via the second pedal in line. This is due to the second pedal being the dominant tone in your signal and the volume addition literally adding more “gain” to the signal path. So when you’re tone hunting and don’t want to bring out the big fuzzes and distortions, look to your overdrive pedals for increased clipping.

The biggest thing to keep in mind when in-studio or while hunting for a tone is to experiment and play with the tones your gear is giving you. Stacking overdrives, swapping pedal locations in your chain, or just seeing if you can get a new sound out of an old pedal are all great exercises in enjoying and thriving with the gear you already have.