Stop Trading Gear So Soon. Thoughts on a decade with the Orange OR-15. 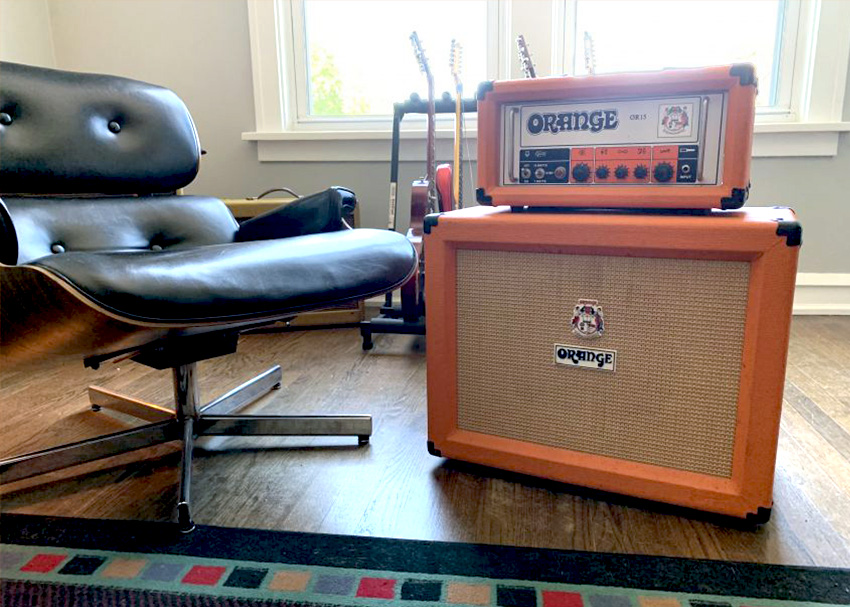 As tone chasers and curious musicians, it’s pretty easy to keep trading gear. While new gear won’t make you play any better, new tools can expand what we as musicians can do. Most of the gear that I get usually stays in my possession for a long time. Whether I’ve used these pieces of gear for every gig is a completely different story. In my opinion, the most important thing about a piece of gear is knowing how to use it, and how to get the most out of it. This knowledge only comes with time. Trading gear can be a slippery slope.

Orange’s History with the OR Series

The Orange OR15 came out in 2012, and it is still the only amplifier that I have ever pre-ordered. At that time, Orange were concentrating on modern-sounding amps like the Rockerverb series, but there was something new (yet old-fashioned) on the horizon. At winter NAMM of 2012, Orange announced the OR15, which was a smaller version of the previously released OR50. This was in the first push toward low-wattage, “lunchbox” style amps that were popularized by the Tiny Terror. The OR50 and OR15 were a throwback to the “pics only” look that was found on the original Orange amps that were made in the 1970s. The changes didn’t just stop at the aesthetics, but with the sound of the ’70s. While the OR50 was my dream amp, I couldn’t quite afford it, and I’m not sure if I could have played it at small clubs.

My History with the OR15

For many years, the OR15 was my only amplifier. I experimented with changing the 12AX7 preamp tubes for some 12AU7 tubes so the gain could be tamed. Believe it or not, the OR15 was my main gigging amp for jazz gigs. Perhaps it wasn’t the best decision, but it was the only amp that I had.

Looking back, it’s pretty hilarious that I was playing a Les Paul through an Orange for jazz gigs. I never really believed in the traditionalist sort of thing where you to have certain gear to play a specific style of music. After playing this amp in any situation, I knew where to set the amp without having to turn it on. This is the importance in knowing the gear that you have.

10 years have gone by, and I still own the OR15. These days, I typically only play through a Princeton Reverb and a tweed Deluxe, but I can’t seem to ever get rid of the OR15. Having a bit of variation in a collection helps out quite a bit. When I have the urge to blast some Thin Lizzy or rip a Hendrix solo, the OR15 is the amp that is peeling the paint off the walls. Not only does my OR15 hold some sentimental value, it’s just a great sounding amp. It does what my other amps can’t do, which is probably the reason why anything I’ve kept for more than a year has stuck around.

Don’t Get Rid of Gear Immediately

The journey of finding what you like is pretty unpredictable. Now I own several tweed amps, the Princeton Reverb, and of course the OR15. While Fender amps are my preferred sound for the style of music that I play currently, I can always plug into the Orange when I need the punch. Having the ability to be versatile or get a sound that isn’t in my direct wheelhouse is great tool to have in the shed. The OR15 was my jumping off point. The amp that really started my thirst for exploring new guitar tones.

Just because you heard a certain gear demo doesn’t mean you need to keep trading gear. It’s great to be curious and see how that piece of gear could help you get where you want, but the freedom of being familiar with the same gear is priceless. There’s a reason why you bought a certain piece of gear. Inspiration can sprout from anything. We’ve all heard people say “I need this insert piece of gear to sound good.” Maybe step back and see how much time you’re fiddling with settings or constantly researching something new, and just enjoy the things you have.

Play the gear that you have before moving on to something new. It’s very rewarding when you get away from the mindset of “what could be” rather than “what is.” At this point, I’m not sure if any one piece of gear will ever fully quench my thirst. That is what we call a never-ending cycle.