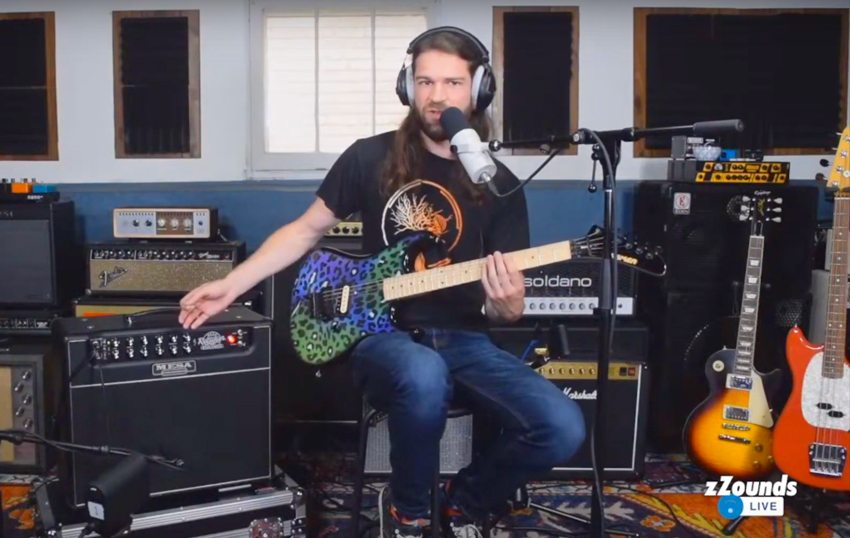 When there’s a blaring guitar amp right next to a vocal mic, there’s no denying that you’re going to hear some guitar bleed and pick noises coming through. In a live broadcast, especially when you’re trying to highlight the sound of a specific piece of gear, audio bleed can be annoying and distracting. In order to tame the ambience that results from this issue during zZounds’ livestreams, I use a technique called ducking. Here’s how I do it.

To accomplish this technique on our livestreams, I put together a hybrid setup using the following pieces of gear:

This walkthrough is pretty universal, but the most important gear to have is a compressor with a sidechain input. What is a sidechain?

If a cable is plugged into the compressor’s side chain, however, it won’t work like usual. Instead, the compressor will only start functioning (trigger) if it receives signal into its sidechain input. This means that you can use any audio source or track in your mix to trigger the compressor.

Called “ducking”, this technique ranges from creative tool to useful utility. You can make stereo mixes breathe when triggered by a four-on-the-floor kick drum pulse, or trigger the bassline with a kick to ease the bass guitar down a few dBs, allowing the kick some wiggle room to poke through the mix.

Using ducking during our livestreams has been crucial for producing the cleanest sounds possible, even when there are a million other variables that could (and probably might!) go wrong during a live broadcast. Now, without further ado, let’s get down to brass tacks.

First, set up your vocal chain like normal. For zZounds livestreams, I typically run the vocal mic into our Focusrite ISA Two preamp, with the ART SCL2 compressor plugged into the Focusrite’s insert loop. Finally, the pre is plugged straight into the Universal Audio Apollo X4 interface.

To get the best results, I set up the compressor with the lowest threshold and the highest ratio, for good measure. Also, don’t forget to adjust the output (make-up) gain so you don’t clip your preamp.

After setting up the guitar channel like normal, the fun begins. In UA Console, I will take a cue from the guitar channel, send that from the Apollo’s line out, and finally into the vocal compressor’s sidechain input (as hooked up earlier). I then make sure to turn up the guitar’s cue fader in Console to unity gain to set up the sidechain feed for the compressor. At this point, we should be about ready to rock.

If set up correctly, whenever the guitar is played, the compressor in the vocal chain will come alive and squeeze the signal down into a whisper. Since the compressor is signal dependent, a louder signal being fed into the sidechain will create a greater compression effect. This allows you to keep both mics live without having to ride a vocal fader or miss some speech while worrying about hitting a mute button.

Special thanks to our livestream host-in-chief, Justin, who was kind enough to blast out a few riffs for these samples.

This first track shows off the solo electric guitar track coming from the guitar’s microphone.

Next, let’s take a listen to what the vocal mic is giving me while the guitar is being played.

Wow. That’s a lot. Keep in mind, I have dialed in the vocal mic’s gain to accommodate a regular speaking level. The guitar amp is simply too loud and too close to the vocal mic. The distortion heard on the track is actually caused by the vocal mic preamp being overdriven by the hot signal. If this issue isn’t handled correctly, your broadcast mix will sound something like this, pick noises and all:

Now, let’s hear the same vocal mic track with our sidechain engaged and the compressor on:

Please note that I didn’t touch anything other than the compressor and I didn’t pull any trickery by lowering the vocal fader for this bounce. You are hearing the actual volume difference created by the compressor. Finally, let’s take one last listen to the both tracks, but this time with the ducking engaged.

The noise and distortion from the vocal mic getting absolutely pummeled by the guitar has been virtually eliminated, resulting in a super clean track that keeps the focus on the music, rather than becoming a muddy mess.

Bad, But in a Good Way: Mesa/Boogie Badlander 50zZounds Live: Re-Work Your Guitar Sounds With Reamping