Take Control of Your Ambience With the Eventide UltraTap! 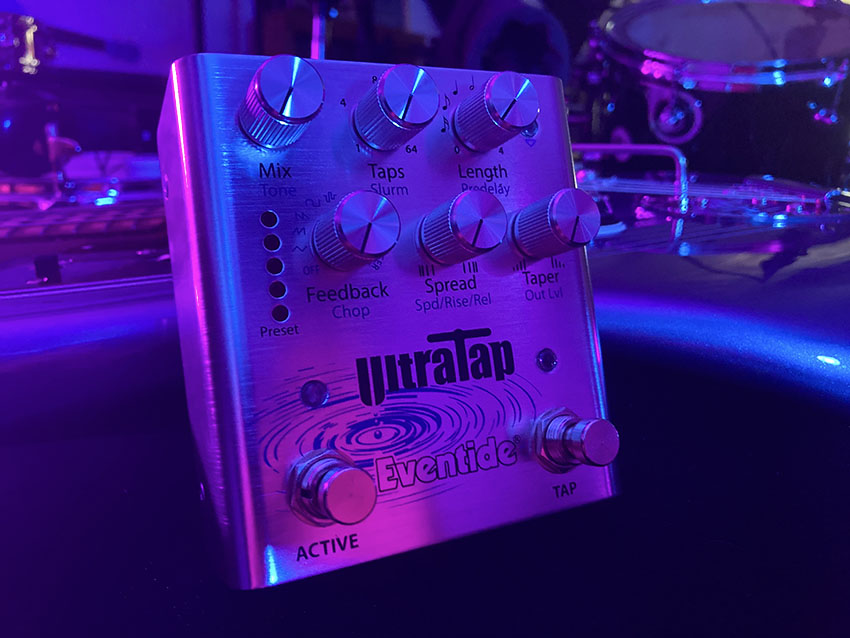 Ever wondered what it would be like if a vintage Echoplex had modern capabilities like saving presets, expression out, MIDI, and even tap tempo? The engineers at Eventide made that very thought a reality with the Eventide UltraTap reverb, delay, and echo pedal.

The UltraTap delay algorithm may seem familiar to Eventide fans from its time as an Eventide software plug-in and as a selectable effect algorithm on the Eventide H9 MAX multi-effects pedal. This compact beast allows for everything from pad-like swells, to standard rhythmic delay, out of this world modulation, and everything in between. So today we’re taking an in-studio look at the versatility, ease-of-use, and sonic landscapes we can create with the Eventide UltraTap. We’ll take each of the stock presets at face value, write guitar parts with them, and finally combine all these incredible tones into one track complete with a full band.

Getting to Know the UltraTap

Lets start by taking a look at the pedal. There are two switches with corresponding LEDs marked ACTIVE and TAP. The bypass switch (effect on/off) and the tap tempo switch for your delay, echo, or reverb can be on time with anything you’re playing. The LEDs above aren’t only for knowing when the effect is on — they can also be used to select Latching or Momentary footswitch bypass, (above the ACTIVE switch) or for toggling time/tempo and saving presets (above the TAP switch.) These switches are also a tactile way to make selections within the global pedal settings, preset selection mode, as well as creating and saving new presets. The pedal is equipped with USB out for creating and saving up to 127 presets available via MIDI with the Eventide Device Manager software on Mac or PC, an expression input for adjusting parameters with an expression pedal, mono/stereo outputs, and selectable switches for “Guitar” or “Line Level” on the rear of the unit.

Now, let’s quickly go over some of the marked knobs on the face of the unit:

Crafting a Song with the UltraTap

The first thing I noticed when playing through the UltraTap were the monstrous walls of sound created on certain presets, and the vibe of the song really seemed to come together on its own after hearing them. Since we’re going heavy on the delay, echo, reverb, and modulation for each individual guitar track, something within the shoegaze or post rock genres seemed to be a natural fit. But this pedal would feel right at home within any other genre due to the sheer number of adjustable and controllable parameters on each of the effects within the UltraTap algorithm.

Where I started was Preset 2, or “Stutter,” while playing a simple chord arpeggio. The UltraTap effect kept tempo and really elevated whatever I played and made it sound huge. Stutter was a perfect start for our rhythm track, as it left the tone up to me and created a lot of exciting “air” around each note I played.

As you can hear in the full mix above, what really comes through is the lead performed with Preset 1, or “UltraTap.” This preset effect takes everything great about this delay and reverb algorithm and puts it on display. The speed picking lead blends together and leads the melody over the driving bass line to create a huge landscape of delay and echo.

Preset 3, or “UltraSwole” had rhythm written all over it. A pad-like reverb swell, UltraSwole shored up that “wall of sound” feel I wanted in the background of this track. Not a flashy melody or lead, this rhythm makes the entire song feel thicker, much like how a synth pad would. If you were to take it away the track would feel empty and weak.

Preset 4, or “Glitch Trigger” was a hard one to nail down but I knew I wanted to use it on the track. A glitchy mess was cleaned up with a high on the neck rhythmic guitar part that sounded great once the mix was done. The Glitch Trigger effect brings an “alien-like” tone to the melody and I think it fits well within the walls of delay around it.

The Eventide UltraTap is the product of decades of engineering by the masters at Eventide. A delay algorithm with its roots all the way back in the ’80s has made its way to stompbox form and is easier than ever to wrangle and use to craft larger than life tones for your next track. For more songwriting with the Eventide UltraTap, check out Eventide’s own video where they craft a demo track for each individual preset.

Live the Dream: ASM Hydrasynth Desktop DemoReturn of the King: Maestro Pedals are Back!
Comments: 4