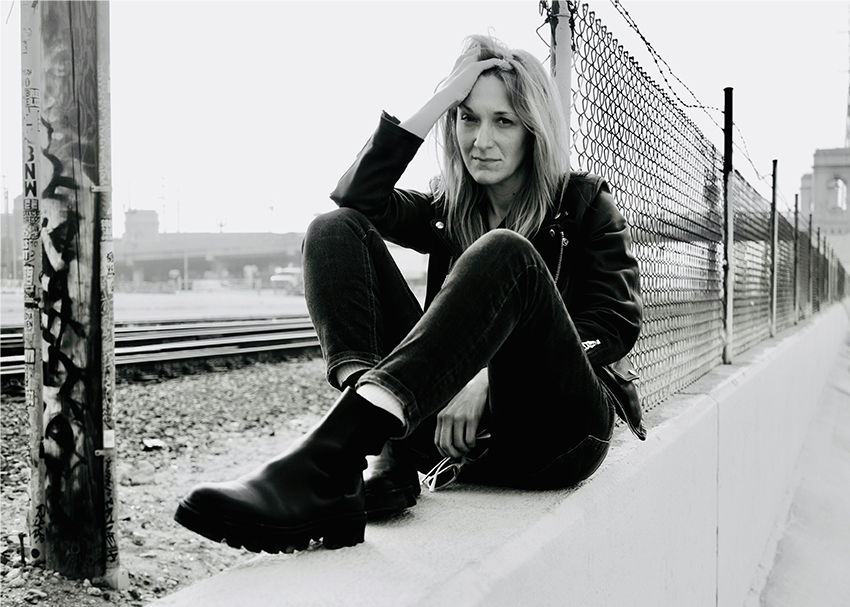 LA-based musician Vanessa Wheeler, who goes by the performing name VAVÁ, has hustled over the past few years to grab the ears of listeners and build a following. Her soulful sound stirs together pop, R&B, and rock influences, with a pinch of the Brazilian music she grew up with to shake up the rhythms.

If you’ve watched a lot of boutique pedal, amp, and guitar demos over the last few years, chances are you’ve seen Wheeler making the gear sound incredible with her virtuosic playing. I chatted with Wheeler on how she developed such a unique sound, what her future plans are, and where she sees guitar going in the years to come.

zZounds: How did you develop your guitar playing style?

VAVÁ: In short, it’s a confluence of isolation, intrigue and boredom, LOL. I was an only child and an angsty middle schooler with no social life, so I played guitar in my off time. I mostly wrote songs and tried to add the percussive and harmonic elements I was hearing in my head, but couldn’t execute because I didn’t know anyone else who played music. I also enjoyed the challenge of writing something that seemed impossible and teaching myself how to play it effortlessly. Finally, in truth, I have a very overactive ear and can experience musical boredom in the writing process, so I unconsciously started to complicate the guitar part as a mental exercise to move past my blocks. I use that as a technique to this day, but those parts don’t always make it into final production now.

zZounds: When you say you would complicate the guitar as a mental exercise, what do you mean by that?

VAVÁ: By saying I’d complicate the guitar, I meant the guitar parts, specifically. So sometimes traversing complex chord progressions, or fingerpicking activity, rhythmic changes, arpeggiation, and usually in some combination. It would keep me engaged with the song I was writing and not try to start something else.

zZounds: Who are some of your influences, both in guitar and in general music?

VAVA: I ignored a lot of influences until I was in high school, and even then music was more a function of the tools I had, along with wanting to write something different and “better” than the last thing I had written. I can say that I absorbed a lot of my harmonic language from Brazilian music, and later from falling in love with modern and contemporary classical/experimental music.

I LISTENED to a massive gamut of music, including ABBA, The Offspring, Green Day (Dookie and Kerplunk in particular), NIN, Erykah Badu, The Flaming Lips, Radiohead, Boards of Canada… way too much Ace of Base…

zZounds: You’ve mentioned Brazilian music as an influence. What about it inspires you?

VAVÁ: Brazil is kind of where my heart is. I have a seriously massive family in Brazil. It is of me and was all around me growing up. It’s all about how aesthetics subliminally communicate a story of a person, place, and/or time; Brazilian genres marry the complex rhythms, percussive timbres, and harmonic interest brought from Africa with the slithering melodies and harmonic content from the European baroque and classical periods (Choro and Chorinho in particular). It’s something uniquely Brazilian that we grow up with, and thus finds its way into almost all music made by Brazilians – whether they are traditional or popular genres.

zZounds: According to an IG post, you recently quit your day job to pursue music full time. What is that like as an LA musician today?

VAVÁ: Well, I wouldn’t really know since I was just starting to work at a studio when I got offered a gig to play guitar on a national tour for a couple of weeks. I just got back and am going on tour again for December. I guess that’s what it’s been like, but I hope to see a lot more shows, work on production, write songs, release music, play with other artists, and keep creating interesting YouTube videos and pedal demos. 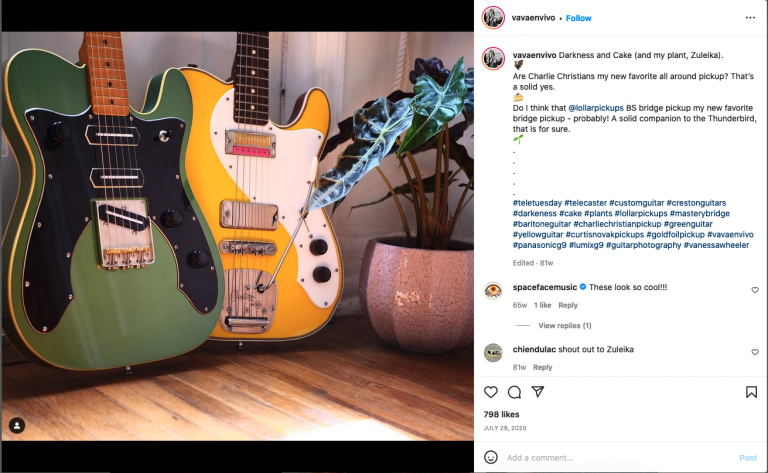 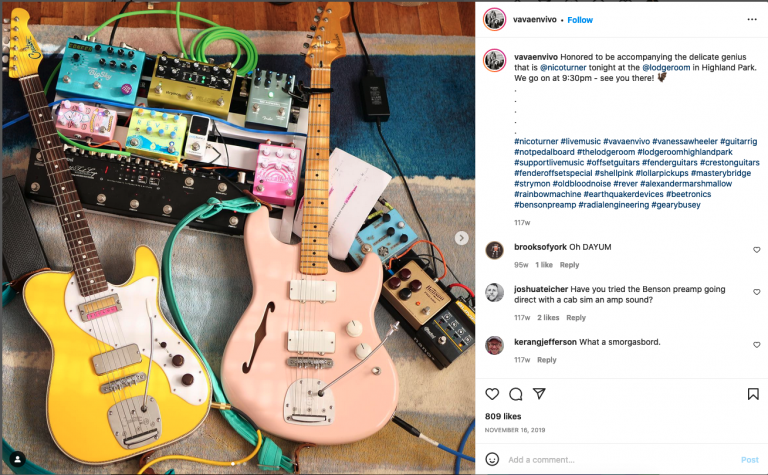 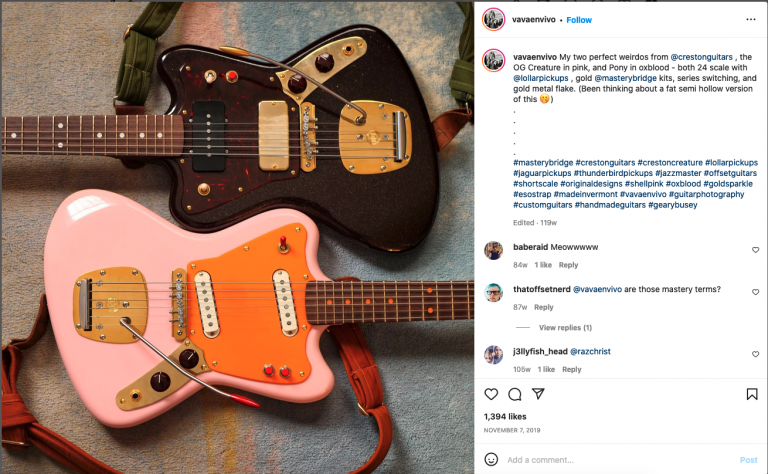 VAVÁ: IG has given me the ability to get out my variety of interests to a wider audience, along with helping me connect with people I ordinarily never would have met. Every gig I’ve gotten since putting time into it has been completely related to my Instagram presence!

VAVÁ:I have a guitar I’d call my “signature. “It was codesigned with Creston Lea of Creston Electric and is a reverse offset, small bodied, short scale guitar inspired by the Fender Super Sonic. Since I love using the Jazzmaster/Jaguar style vibrato, and since Fender only makes the SS with a Strat vibrato, I chose to talk about the venture with Creston and he accepted the challenge. It’s rare that luthiers will work on new shapes, but I think he saw that there is a market for something like that. They are super lightweight and again, small, so it’s ideal for players with smaller builds who want something at a 24.75 scale or shorter. Quite a few of them are already out there in the world!

zZounds: What are your thoughts on the guitar industry’s treatment of women today? Have you seen any changes in that regard over the years/decades?

VAVÁ: The industry is much more inclusive than it’s ever been and is actively pushing visibility of BIPOC, womxn, and non-binary players. It can feel performative at times, but the point is to normalize seeing all kinds of people playing all kinds of instruments. It’s more about how traditional audiences that bring the shade when they see BIPOC/womxn/non-binary players not execute/choose not to play with virtuosic ability, or play in styles that they don’t view as valid; it says a lot about the group of people the industry used to pander to until it realized that a far greater ROI could be had by diversifying its client base. I certainly think social and media pressure had something to do with the shift, but the bottom line is the ultimate motivator, let’s be honest.

zZounds: What do you think of the current climate for guitar in popular culture today? Not long ago, there was a lot of talk about it being in decline. Do you think that’s the case?

VAVÁ: Guitar has made a comeback for sure, and largely because of the amount of young womxn and non-binary folk picking up the instrument and making it their own. I think it’s also seen a major resurgence due to the pandemic, as people learned to fill their time with interests they may have always had but could not find time for. Guitars/basses can be intimate and portable, or loud and sometimes raucous, and communicate a person’s individual style both visually and sonically; for that reason, I don’t see it dying out in this century.

zZounds: You’ve recently released a new single, “Two Hearts,” as well as two more singles in 2020. Can we expect an album sometime soon?

VAVÁ: I’m currently writing a record and hope to have it out sometime late next year, if I work as fast as I’d like to!