Epiphone 1959 Les Paul Standard: All the Iconic Features at a Sliver of the Price. Hear Epiphone's recreation of the "Holy Grail" Les Paul. 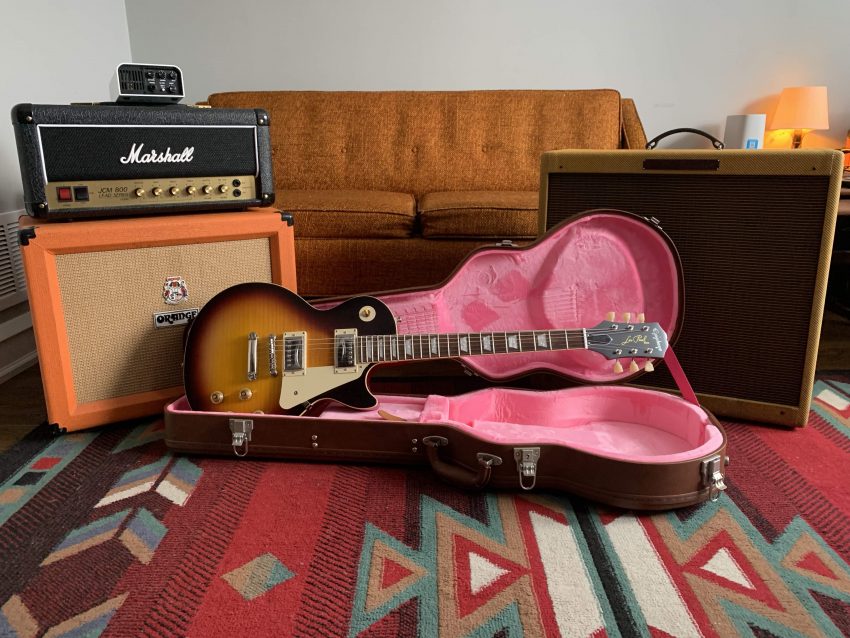 The Epiphone 1959 Les Paul Standard is an exciting addition to the Epiphone line since “bursts” are known as the holy grail of electric guitars. Where the Gibson Custom Shop ’59 Les Pauls can cost up to $8,000, the Epiphone 1959 Les Paul Standard comes in at $849. At a sliver of the price, you get the looks and the chunkier neck profile associated with a vintage Les Paul. This guitar comes loaded with upgrades from the factory and vintage-era appointments, which make it a perfect addition to any vintage guitar lover’s collection.

Because I’m so particular when it comes to vintage recreations, the finish needs to look the part. In the case of the Epiphone 1959 Les Paul Standard, it hits the marks. The sunburst finish gradually blends from brown to yellow rather than abruptly changing between the two different colors. The AAA-grade flamed maple top is a veneer, but has a great depth with some light. While most Epiphones have a high-gloss finish, this Les Paul sports a satin finish that is meant to resemble a VOS finish from the Gibson Custom Shop. Other details like the single-ring Kluson-style tuners and knob pointers known as “thumb bleeders,” elevate this guitar into an upper tier of guitar nerdom. All in all, the fit and finish and attention to detail make this Epiphone just a tad more special.

Probably the most iconic feature of a 1959 Les Paul Standard is the neck. They’re known for their chunky, rounded neck profiles that are highly regarded amongst guitar nerds. At the end of the day, the neck profile does have the biggest impact on how a guitar feels. As someone who loves a chunky neck carve, this neck does feel pretty close to what you can find from the Custom Shop. The satin finish all around the guitar makes it easier to get broken in with, as opposed to the high-gloss finishes that can be found on a normal Epiphone model. This finish doesn’t get in the way when your hands get sweaty while grinding out a song for an hour or two. The feeling of the finish will only improve over time while you’re putting mileage on the guitar. In comparison to the rest of Epiphone’s guitars over the years, this 1959 Les Paul Standard has to be one of my favorite feeling models.

Another important feature of a 1959 Les Paul is, of course, the pickups. The Epiphone 1959 Les Paul Standard is loaded with Gibson USA Burstbucker 2 and Burstbucker 3 pickups with CTS potentiometers and 1950s-era wiring. Gibson has been producing the Burstbuckers for a number of years now, and as someone who owns a guitar with them, they are a welcome addition. These pickups can clean up with the volume backed off or just a light touch on the strings, and howl when you want them to.

Not only do Epiphone’s Inspired by Gibson guitars look the part, they sound the part, too! Hear the Hummingbird, J-200, ES-335, and ES-339 together in this video demo! Watch »

One of the most interesting features of this guitar is the long neck tenon. Previously, this was only available from the Custom Shop and vintage examples. This traditional-style construction gives the guitar increased sustain as made famous in Spinal Tap. A few years ago, the zZounds team was able to film a video featuring the Inspired by Gibson Collection, and in that room was a prototype of this very guitar. My first impressions of the guitar were how the satin finish affects much more than just the feel. The guitar feels like it resonates more freely due to the thinner finish.

When in Rome, you just need to play a Les Paul through a Marshall. In this playing example, I used a Marshall Studio Classic JCM 800 completely dimed into an Orange PPC112 with a Two Notes Torpedo Captor X for some attenuation. This track goes from the neck pickup, to both pickups, and finally to the bridge pickup. For the microphone, I used a Rode NT1 straight into a Universal Audio Arrow.

Since there’s a certain guitar player who is known for playing blues through tweed amps with vintage Les Pauls, it would be a missed opportunity to not plug into a tweed Bassman. For this recording, only the bridge pickup was used with the amp set on the edge of breakup. Instead of the Rode NT1, I used an SM57 near the edge of the cone into a Universal Audio Arrow.

I’ve said it in the past, but I’m by no means a recording engineer. No plugins or pedals were used in either of these recordings.

The upgrades don’t stop with the electronics and the attention to detail — this guitar even ships in a vintage-style hardshell case. It resembles the classic brown case with pink interior that was standard for Gibson in the late-1950s. The whole package feels like Epiphone really upped their game from first appearances to the feel, and of course the classic sound that a Les Paul should make. With the Gibson USA pickups, this guitar sounds fantastic right out of the box, so this is a guitar that I don’t think I’d modify. For anyone who is looking for a ’59 Les Paul for a fraction of the price of a Custom Shop version, this guitar will not disappoint.

It's Your First Verse: Make It Pop!Rabea Massaad Shows Off the Victory V4 Kraken
Comments: 3