Martin DJr-10E Review. This compact dreadnought is so much more than a couch potato. 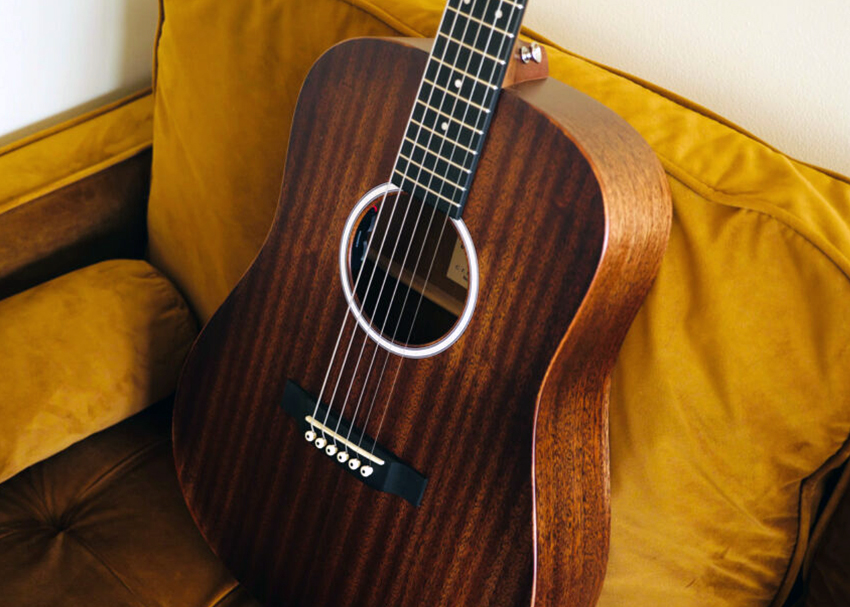 One of Martin’s newest offerings is the compact and comfortable DJr-10E. Don’t be fooled by its size — this guitar sounds a lot like its bigger counterparts in the Martin dreadnought range. The DJr-10E is given the Streetmaster treatment with a broken-in feel, which inspires you to play a little differently from how you’d play a modern-looking guitar. As part of Martin’s Junior Series, this guitar is a little bit smaller than the standard dreadnought guitars Martin has been making for almost 100 years. Because of its slightly smaller size, this guitar is absolutely perfect for playing on the couch or taking on a road trip. I’ve found myself just watching TV and picking up this acoustic on a relaxing night on the couch.

As I mentioned before, the DJr-10E is outfitted with the Streetmaster finish, which funnily enough reminds me of the look of barnwood. The proportions are pretty spot-on for this guitar, even if the body is slightly smaller. The neck has the same 1 3/4″ nut width as the guitars from the Standard Series. Sometimes, when you get a shrunken down version of a classic, the proportions can be a little off and could look a little odd. That’s not the case here. The DJr-10E is a very inviting guitar to pick up. Its satin finish and dark, warm color is easier on the eyes than most smaller-bodied guitars in this price range. Overall, I’m a fan of the look of the guitar, which may inspire some more simple chord progressions and fingerstyle playing.

Getting the feel of a broken-in guitar straight from the factory has been quite the rage in the guitar market for the last several years. While the relic’ing process elicits very divided opinions in the community, the Streetmaster finish gives the feel and look of a seasoned studio weapon, without the “wear and tear” of a guitar that had been on the road for decades. I’m a big fan of satin finishes on guitars, so as soon as I opened the gig bag, I knew I’d probably like the feel of the neck. I was right: the frets, fit, and finish of the neck, nut, and saddle made for a very easy playing guitar. While this is a 24″ scale acoustic — just a bit shorter than the standard 25.4″ that is found on guitars like the D-28 — the string tension felt like home right out of the box.

As a smaller-sized guitar, the DJr-10E might not have the deep low end of a traditional dreadnought-sized guitar, but it’s a very balanced sound. The guitar as a whole makes me play very differently than I would if I picked up any other guitar. Because of its more compact size, the guitar responds very well to fingerstyle and light strumming. With a smaller top, the guitar reaches its loudest volume with a lighter touch than a guitar with a larger surface area. This isn’t a “bluegrass” guitar as some might associate with a Martin dreadnought, but it still feels great to play single lines with.

The large-and-in-charge size of the standard Martin dreadnought can be a bit much to some people who prefer the feel of a smaller guitar. I can see why a lot of people would gravitate toward a DJr-10E this for someone a little younger, or just learning how to play. Where they would grow out of a smaller, 3/4-sized guitar much quicker, the DJr-10E is a much better fit. Maybe down the line, it could be used as a roadtrip or couch guitar and true lifelong companion. The Martin name is trusted in all things steel-string acoustic guitars, so the DJr-10E is a safe bet for anyone looking for a smaller version of a classic.