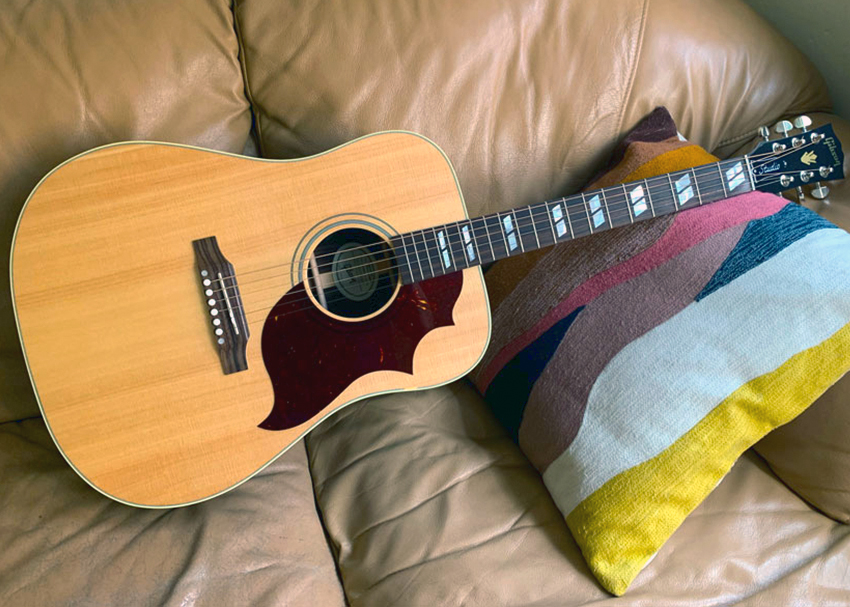 Think of a Gibson Hummingbird, and vibrant visions of the 1960s probably come to mind. With its vivid Cherry Burst finish, mahogany back and sides, and detailed pickguard illustration, the Hummingbird is instantly recognizable. But what if you were looking for a little something different? Enter the Gibson Hummingbird Studio Rosewood.

Not your ordinary Gibson Hummingbird, this Studio Rosewood version offers guitarists a stripped-down style paired with a crisper, more focused sound thanks to its beautiful rosewood back and sides and thinner body depth. Join me as I dive deeper into this new-for-2020 model.

While retaining the square-shoulder body shape that made the original Hummingbird famous, this special ‘Bird is a much different take on the classic. Like its name suggests, the Studio Rosewood model replaces the original mahogany back and sides with stunning rosewood. The large illustrated pickguard has also been replaced with a plain one, which can be a pro or a con depending on your preference. While the overall body depth is a little thinner than the original, the top maintains its traditional Sitka spruce, and is available in both Antique Natural (as shown) and Rosewood Burst finishes. Keeping the OG model’s tradition going, Gibson finished off this guitar with a rich rosewood fingerboard with classy split-parallelogram inlays.

Picking up the guitar for the first time, I was greeted by Gibson’s killer Advanced Response neck profile, which just fits my hand like a glove. Avoiding any comparisons to baseball bats, this neck is similar to the ’60s style slim taper neck on a Les Paul that I’ve played for years, so I had no trouble warming up to the Hummingbird. The rolled fingerboard edges felt smooth and there was absolutely no fret sprout. The slightly slimmer body also felt relatively comfortable on my lap, and feels fantastic hanging on a strap.

For those familiar with the sound of dreadnought acoustics featuring Sitka spruce tops with rosewood backs and sides, there aren’t any surprises here. For those who aren’t, prepare to immerse yourself in the world of “professional” sounding acoustic guitars. While not the traditional body wood combo found on classic Hummingbirds, the addition of rosewood really tightens up the guitar’s overall tone, offering a focused beam of sound that cuts through the densest of mixes.

Check out our exclusive demo of the Gibson Hummingbird Studio Rosewood

Although there’s a healthy amount of bass response, the star of this guitar is its midrange and high end. This guitar shimmers with such a sweet high end that never gets harsh. Mellow fingerpicking retains clarity and detail that naturally enriches softer passages. When you switch to hard strumming, the Studio Rosewood explodes with thick mids and a sparkling high end that never gets out of hand.

Lively and responsive, this guitar is a dynamic machine. Playing softly doesn’t diminish tone in the slightest, and the Hummingbird Studio is just as responsive to light fingerpicking. As you play harder, the richness doesn’t diminish, but other sonic treasures are opened up: a fantastic low end that doesn’t get in the way and a midrange that will be heard loud and clear in most situations.

Take a listen to the sound samples below to hear the Gibson Hummingbird Studio Rosewood in action. I captured these samples using a Audio-Technica ATM450 small-diaphragm condenser microphone going into a Universal Audio Arrow interface. Within the interface, I used the Neve Preamp Unison UAD2 plugin and an LA-2 compressor that only kissed -1 to -2 gain reduction. This was just to keep everything in check going into Logic.

As a traditionally electric player, I have to say that playing this guitar felt like butter. The action is perfect and made for some smooth playing sessions that comfortably lasted hours. While I love the original Hummingbird’s aesthetic, the Studio Rosewood offers something more understated, while maintaining top-notch style and sound. The rosewood back and sides offer a much more focused sound than you would normally find in a Hummingbird. Those who want to bask in the warmth of that traditional mahogany sound should stick to the original model.

Overall, I have to say that I absolutely loved this guitar. From the aesthetics of the split-parallelogram inlays and gorgeous rosewood back and sides, to that powerful sound that projects mightily from its slim body, the Gibson Hummingbird Studio Rosewood is a fantastic all-around guitar that fits perfectly in most players’ collections. For a crisp, rich sound both in the studio and on stage, this guitar could be your go-to acoustic workhorse.