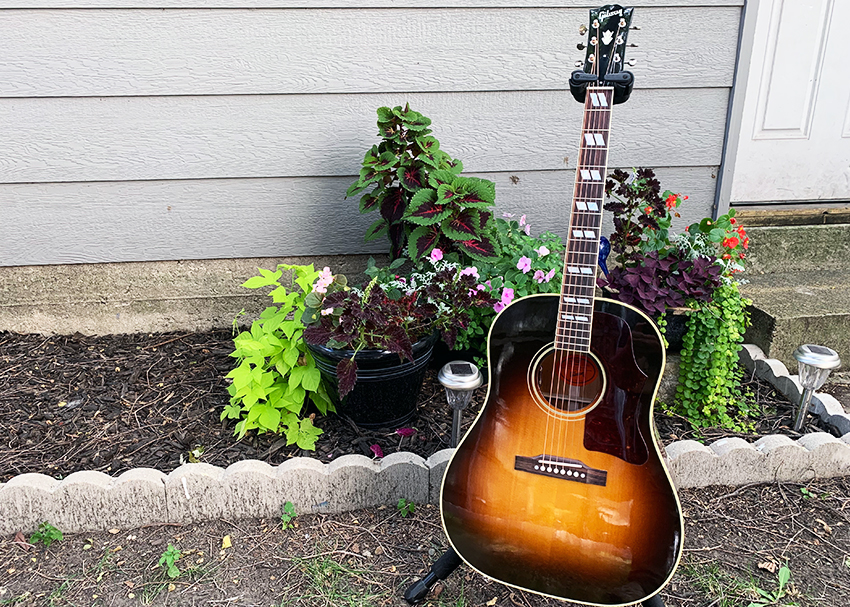 The Gibson Southern Jumbo was introduced in 1942 as a more “deluxe” version of the J-45. Of course, the Southern Jumbo has gone through some changes since its introduction in the early 1940s. I got the chance to try Gibson’s 2020 iteration of this classic model for myself. Read below for my thoughts, and listen to some audio clips to hear it in action!

The current Southern Jumbo takes inspiration from different eras, but mainly from the late 1940s into the early 1950s. This Southern Jumbo shares some similarities with the Gibson ’50s J-45. It has the solid spruce top with solid mahogany back and sides, but with some aesthetic upgrades that class up an already great-looking instrument. This includes split parallelogram inlays, neck binding, multi-layered binding around the body, open-back Grover tuners, and an inlaid Gibson logo and torch on the headstock.

When you first pick up this guitar, you’re immediately greeted with a slightly chunky and comfortable neck profile. To me, the neck is probably the most important part of a guitar. If you’re having a hard time getting your hand comfortable up and down the neck, it tends to inhibit your playing.

Gibson knocked this neck profile out of the park with rolled edges, smooth fretwork, and a neck carve that fits nice and cozy in your hand. The fit and finish is top notch, which is exactly what I’ve come to expect from Gibson acoustics. Tuning up this guitar is a breeze with the extremely sturdy 18:1 Grover open back tuners. All in all, this feels like a solid guitar that will give back exactly what you put in.

I know we guitar nerds like our buzzwords like “woody tone” and “dry and airy resonance,” but these are honestly the most accurate descriptions of this guitar. While some acoustic guitars can sound stiff, the Southern Jumbo sounds lively and balanced. Lay into the strings with a pick and it’ll sound just like all those records you listened to growing up.

Even though this is a large-bodied guitar, finger picking really shines with a warm, rounded sound. It might sound weird, but I’m a big fan of the lightweight, open back Grover tuners. Heavier tuners can stifle resonance throughout the guitar, causing you to lose out on some tone. Let’s be honest, no one wants to lose out on tone.

Clearly, I’m not the greatest recording engineer in the world, but you can still hear what a quality instrument like this sounds like. I used my usual setup with an AKG C314 straight into a Universal Audio Arrow and into Logic. For both recording examples, I recorded it with the onboard LR Baggs VTC and acoustically. Put this in the hands of a real audio engineer and you’ll be ready to cut your next record!

For those who want something that’s a little more unique than a J-45, the Southern Jumbo is a great choice. I’m a huge fan of Gibson’s split parallelogram inlays that can also be found on other models like an ES-345, so I might be a little biased.

Gibson Montana consistently shoots great sunburst finishes across their lineup of guitars, and this guitar is no exception. The way a guitar looks is pretty important to me, as well as how it sounds. You’re less likely to pick up an instrument that doesn’t inspire you to pick it up in the first place.

If you’re looking for a vintage-inspired acoustic that can be used for recording as well as live gigs, the Gibson Southern Jumbo is an outlier. This is definitely a guitar that you won’t be able to put back down.