TS vs. TRS vs. TRRS Cables 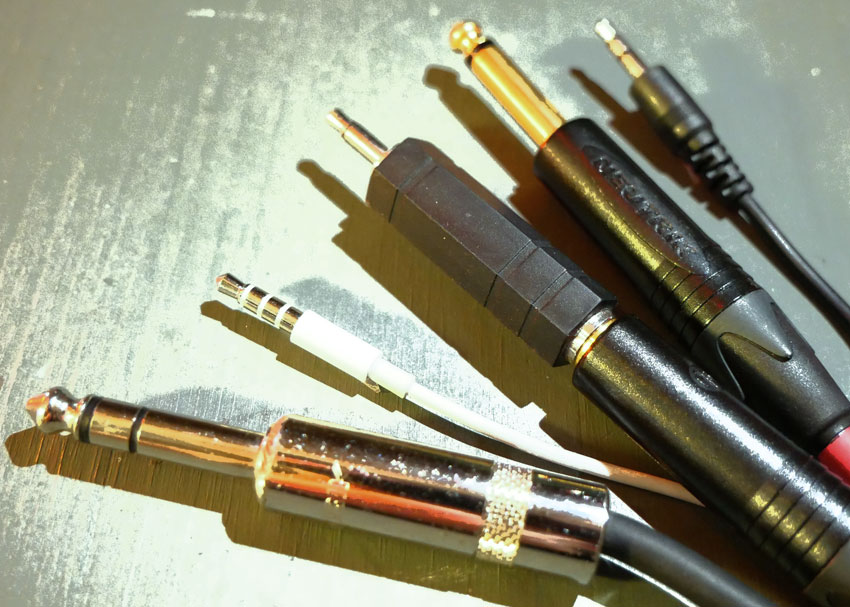 Do you know the difference between TS, TRS, and TRRS? The connector plugs and jacks found on your headphones and audio cables have come a long way from their roots on the telephone switchboards of the early 20th century. Most mobile devices with a headphone jack use the TRRS standard — read on for tips on connecting TRS accessories to TRRS sockets, and more.

Today, these “phone connectors” come in three common configurations: Tip/Sleeve (TS), Tip/Ring/Sleeve (TRS), and Tip/Ring/Ring/Sleeve (TRRS). Count the number of bands on the plug, and you’ll see one band for TS, two for TRS, and three for TRRS. Those black (or sometimes green, red, or white) bands are the insulating material that separates the conductors on the plug from being shorted together.

TS, TRS, and TRRS plugs come in a few sizes, measured by their diameter:

Tip/Sleeve cables have 2 conductors or 2 poles: the Tip for carrying a mono audio signal, and the Sleeve for Ground/Shield, separated by a black band.

This is the mono, unbalanced connector used for your typical 1/4″ guitar cable, pedalboard patch cable, 1/4″ speaker cable, or even the mono 1/8″ cables used for patching a Eurorack modular synth rig.

Because TS cables are unbalanced, they’re susceptible to unwanted noise and interference. Try keeping your TS cable lengths under 20 feet or so to keep noise to a minimum.

TRS cables have 3 conductors or 3 poles: Tip/Ring/Sleeve. This configuration is a widespread standard for carrying mono balanced audio. In a balanced TRS cable, Tip and Ring carry a positive and negative mono audio signal, with the Sleeve functioning as Ground. You’ll also see TRS plugs on send/return insert cables.

Can you use a TRS cable as a guitar cable? Technically yes, but the signal is still unbalanced because your guitar’s stock output is unbalanced. You get zero benefit from using a balanced TRS cable here, and it may even create noise if the middle Ring connector intermittently makes contact — so it’s best to use a TS cable for the output from your guitar.

TRRS cables have 4 conductors or 4 poles: Tip/Ring/Ring/Sleeve. TRRS headphone sockets are the standard on smartphones, tablets, most Macs, and some PCs such as Chromebooks.

You’ll find TRRS plugs on headphones/headsets for use with gaming consoles, computers, and smart devices. On these headsets, the 4 conductors usually conform to the AHJ/CTIA standard (more on that below), which uses Tip and the first Ring for left/right stereo audio, the second Ring for Ground, and Sleeve for the microphone.

TRRS plugs also show up on certain microphones made for smartphones, and on proprietary camcorder AV cables where one of the 4 conductors carries a video signal. The Sony Pentaconn TRRRS connector, with 4 black bands separating 5 conductors. What will they think of next?

Will TRS Headphones Work with My TRRS Device?

Typically, yes. If your smartphone/tablet has a 3.5mm stereo headphone jack, it’s more than likely a TRRS socket. Technically, when you plug a pair of TRS headphones into a TRRS socket, you create an electrical short between the Microphone and Ground conductors, but this behavior is perfectly safe and expected.

Some smartphones are even smart enough to detect when your TRS headphone cable has been plugged in, and automatically shut off the internal speaker while keeping your phone’s built-in mic active — so you can use a regular pair of stereo headphones to hear a conversation more clearly while speaking into the phone. Try it and see.

Your smartphone’s TRRS socket will accept a variety of wired headphones, including…

Will a TRS Microphone Work with My TRRS Device?

There are also a wide variety of smartphone-compatible microphones that have their TRRS plug built-in, such as the Rode VideoMic NTG shotgun mic, Rode SmartLav+ lavalier, Shure MOTIV MVL lavalier, and IK Multimedia iRig Acoustic soundhole mic for acoustic guitar.

Recording to your Smart Device? Watch Your Headset!

Digital microphones can be excellent tools for recording  to your device via Lightning, USB-C, or USB OTG. For recording direct guitar, XLR microphone(s), or line-level audio sources to your mobile device, look for a digital audio interface that comes with the connector your mobile device needs, or add a third-party accessory like Apple’s Lightning to USB Camera Adapter or Camera Connection Kit, which converts a USB-A plug to the Lightning connector used by most iOS devices.

But if you’re using a digital mic or digital audio interface, beware of plugging a TRRS headset/earphones directly into your device!

When your device detects the earphones’ built-in mic, it may actually override the signal coming from your digital mic/interface — compromising your recording.

If you’re recording to your smart device from a digital source, do not connect your TRRS headset/earphones. Instead, use a pair of TRS headphones to monitor.

What if My Device Has No Headphone Jack?

Since 2016, when Apple removed the headphone socket from the iPhone 7 in favor of their proprietary Lightning port, other smartphone companies have followed suit and removed this once-ubiquitous jack from their devices. Devices like the Samsung Galaxy Fold, iPhone 11, and 2020 iPad Pro don’t have a wired headphone socket at all, and users are expected to use wireless Bluetooth earphones.

One solution for connecting your favorite wired headphones to devices that lack any headphone jack is to add a small digital microphone with its own 1/8″ headphone socket built in — such as the Shure MV88+ Video Kit or IK Multimedia iRig Mic Cast HD.

And of course, if your iPhone came with an Apple Lightning to 3.5mm Headphone Jack Adapter, you already have what you need to connect 3.5mm TRS or TRRS plugs to your phone.

Because the industry can never seem to agree on just one cable standard, there are two standard pinouts for TRRS headsets: AHJ/CTIA, and OMTP.

The majority of modern smartphones/tablets use the American Headset Jack or AHJ/CTIA standard: Tip and first Ring for left/right stereo audio, second Ring for Ground, and the Sleeve for microphone. This standard is named after the wireless industry association CTIA, which worked with Apple to standardize it. Due to the popularity of Apple’s iOS devices, the majority of devices on the market now follow the AHJ/CTIA standard.

In contrast with the AHJ/CTIA standard, the less commonly used OMTP pinout reverses those last two conductors — using the second Ring for the microphone, and the Sleeve for Ground. You may find this pinout on an older Nokia phone, PlayStation Vita, 2012 Samsung Chromebook, etc.

This matters because plugging an OMTP headset into an AHJ/CTIA jack, or vice versa, will result in the microphone’s output being inaudible. AHJ/CITA to OMTP converters/adapters are available, should you ever run into this issue.

How to Make Your MIDI Drums Sound HumanA Walrus Audio Overdrive for the Ages
Comments: 2