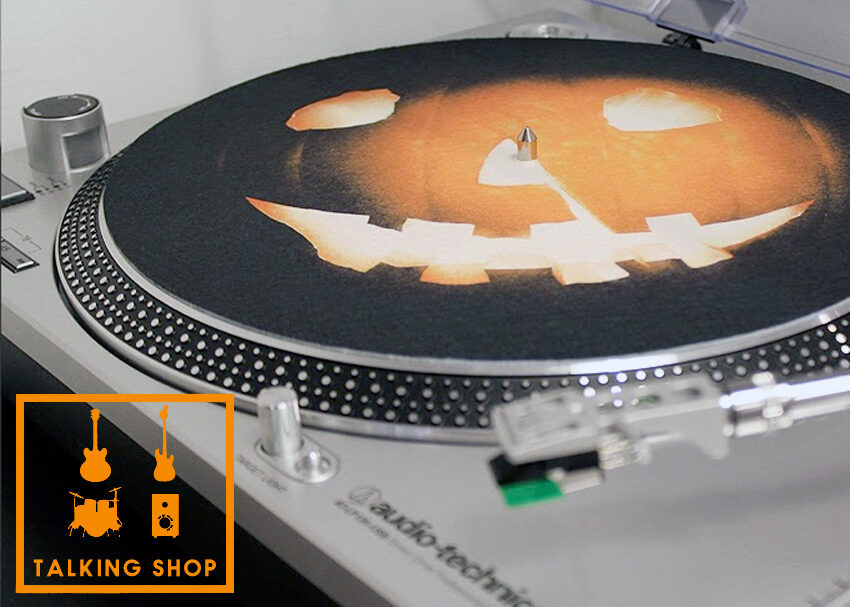 Check out our Halloween picks below, and add yours in the comments!

Michele Musser – Too Much

I’m going out on a limb and not promoting my/the obvious choice for creepiest, spooky, darkest Halloween-like album/collection of songs ever: Comus’ First Utterance and instead hit you with something you can actually play at a party — Michele Musser’s “Too Much.”

On some fateful night in the year of 1986, in Harrisburg, PA, visual-artist-turned-musician Michele Musser turned on her assortment of digital polysynths and tape loops, then cracked open her TR-606 and rained down to tape a sinister set of mutant boogies no one sought fit to release. No matter — the self-released “Too Much” rightfully ends the equally spooky album Eye Chant with a wicked waltz befitting more a dance floor found next to a cemetery, nuclear plant, or a ravine in the woods than one you’d play in. That you can dance to it makes it even more sinister…

An absolute essential for any Halloween party comes from the Nightmare Revisited soundtrack. This cover of “Kidnap the Sandy Claws” by Korn is magical to say the least. It is a dark and heavy rendition of the film’s original Danny Elfman classic.

While some might argue that a song about Sandy Claws isn’t necessarily halloween themed, the context of the film and the spooky nature of this song fully qualifies it. There were two things I loved growing up, nu-metal and cult classic movies, so this cover checks all my boxes. The style of this cover is done in the perfect Korn fashion of clicky bass guitar, heavy 7-string guitars and the powerful and weird vocal stylings of Jonathon Davis. I mean, who doesn’t love Korn?

I have vivid memories of being a kid, riding in the back seat of my parents car as they ran errands on the weekend with this song playing on AM radio. It has a mellow vibe, and way back then, I used to associate the feeling of this song with “getting dark early outside, cool weather, and school.” But now as an adult, I appreciate it much more. This would be perfect to play on a fall evening at a Halloween party — albeit, a mellow party.

The Eurythmics – Sweet Dreams (Are Made of This)

I remembering hearing this song when I was about five years old and it FREAKED me out. The goth synth-organ hook, Annie Lenox’s haunting harmonized vocals, and the robotic ’80s electronic drums all contribute to the unsettling vibe.

Sparse and ominous, the lyrics might have been creepiest of all:

Who was she singing about? Monsters? Ghosts? The neighbor three houses down? The music video, featuring Lenox in a suit, black leather gloves and brandishing a stick, did not ease my fears, nor did the imagery of chained up cattle and…spooky computers?

Yet a part of me was always intrigued by “Sweet Dreams” — and still is — because it is so damn funky. The synth riff slaps, as does the surprisingly bluesy solo. Add this slice of ’80s goth gold in your playlist — who am I to disagree?

If I had to put any song on a Halloween party mixtape it’d definitely be “Cowboys” by the trip-hop pioneers Portishead.

The 1997 masterpiece starts off with this almost Scooby-Doo-esque synth/electric-piano sample, but ramped up into a spine-chilling loop; ditching the corny and childish nature of Scoobs and the Gang for a more adult-oriented creep fest that has you checking your closet for Michael Myers. The vocals are desperate and disparate with a hint of grainy distortion that just reeks of despair. The scratchy low-fi vinyl quality drums and the haunting bass portions are key to bringing this whole track into a melting pot of sheer horror.

“Cowboys” has been a favorite of mine for a long, long time. The track makes me feel hollow and somehow guilty, like I’m walking through a dark dank alley feeling miserable while dreading the thought of what may be lurking in the shadow around the corner. If this song doesn’t hit you as being spooky AF then maybe you should check your pulse to be sure you aren’t a ghoul yourself. 666 out of 10, check it out for certain.

A song that’s never not been on a Halloween party playlist of mine has to be “Halloween” by Misfits. It’s just over a minute and a half of Danzig yelling about the holiday. The song starts pretty innocent with the almost “cute” lines: “Bonfires burning bright, Pumpkin faces in the night, I remember Halloween.” It seems like it’s calling back to nostalgia about a childhood Halloween night. But the lyrics shift in the following few measures with lines: “This day anything goes, Burning bodies hanging from poles, I remember Halloween.”

This is the perfect Halloween party song because it truly showcases how the holiday is viewed after growing up. From a fun, candy-filled night to one of horror, gore and scares. Just like the Misfits, it’s a little goofy, raw and over-the-top, but it works its way into a party playlist and doesn’t stick around too long. “Halloween” by Misfits is not only an ideal party song, but the perfect intro into Misfits and the early ’80s punk and horror-punk sound.