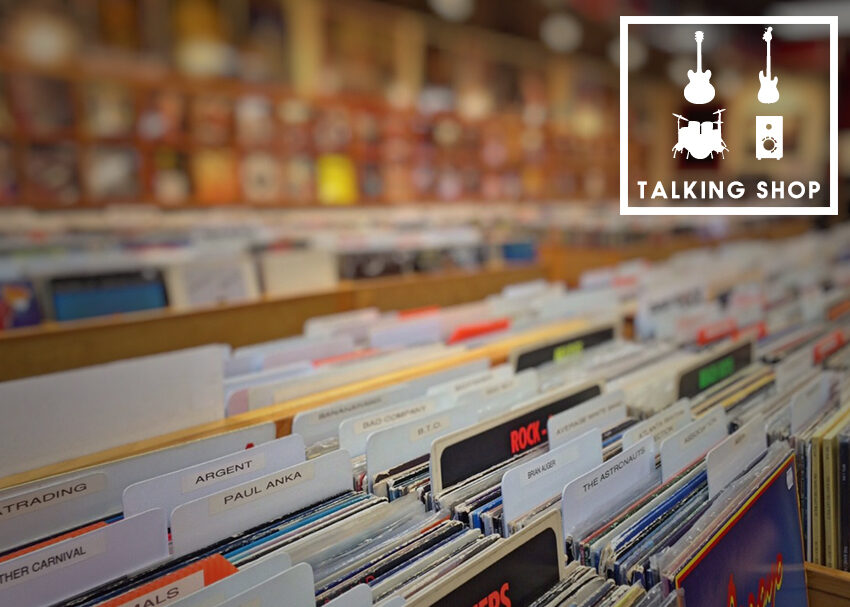 We’re deep into the dog days of summer, and one thing that always helps beat the heat is great music. We asked zZounds staffers to share an album they’ve been into lately, and we’ve compiled the results into this Talking Shop piece. Check out their picks below, and share yours in the comments below!

After stumbling upon them maybe only 5 or 6 months ago, Crumb has somehow filled a musical gap that I didn’t even know I had. Featuring a silky-smooth mix of psych, jazz, and rock, Crumb offers listeners an exploration of sounds, grooves, and textures while keeping everything in a tight, yet catchy package. I was instantly hooked.

Luckily for me, they just released their first album, Jinx. Combining an effortless songwriting style and the velvety vocals of singer/guitarist Lila Ramani, Crumb makes the kind of music that works just as perfectly for an afternoon on the porch with friends as it does in an old, dark venue. Ramani’s sparse chords add jazzy textures. The swirling sounds produced by keyboardist Brian Aronow add depth and atomophere. Drummer Jonathan Gilad lays down sick grooves while keeping everything firmly in the pocket. The resulting atmospheric foundation offers bassist Jesse Brotter tons of space to lay down some tasty basslines — probably one of my favorite parts about listening to the band. Combine everything together and the impressive results simply need to be heard for full understanding.

Sometimes you need to just stop and smell the roses. While you’re at it, give Crumb a chance to provide a breezy soundtrack.

It’s been…quite a few years since I last listened to Barenaked Ladies. Obviously, the late ’90s wouldn’t have been complete without the Scarborough, Ontario quintet’s album Stunt dominating the airwaves. But being that I was raised just a stone’s throw away from Sarnia, Ontario and my parent’s car radio picked up a handful of Canadian radio stations, BNL’s earlier singles are burnt into my mind from car rides to school and around town.

Recently, I woke up humming one of the most underrated songs of all time, “Brian Wilson.” Steven Page’s tribute to the mastermind behind The Beach Boys is, in my opinion, quintessential to understanding ’90s radio rock/pop and the scene around it. Acoustic guitars, lyrics with a story to tell, an outro jam and, of course, congas.

So, attempting to kill the ear worm that had spawned in my head, I threw on BNL’s 1992 record Gordon where “Brian Wilson” appears as the fourth track. This album brings back so many memories, starting with “Hello City,” a song that immediately shows off BNL’s trademark harmonies and tounge-in-cheek lyrics. The album then leads into other notable tracks including: “Enid,” “Brian Wilson,” “What a Good Boy,” and the massive hit “If I Had $1000000.”

It’s incredibly impressive how many of the songs on this album are burnt into my perception of the decade I grew up in. Today, the band is down to a 4-piece as Steven Page left in 2009. Good news is they are still touring, but the harmonies will never truly be the same until they reunite. Until then, I’ll spin Gordon while driving downtown in the rain just to check out the late night record shop.

My pick for an album I can’t stop listening to is Shadows and Silhouettes. Seminal Drum and Bass label Hospital Records just released Hugh Hardie’s new record on June 28th of this year. To me, this is one of the finest examples of modern break beat sampling, sound design and a beautiful combination of vintage synths and catchy vocal melodies.

A majority of the tunes on this record build strongly off of different variations of the amen break. The opening track on this record, “Raindrops,” sets the tone for what’s to come on this wonderfully crafted record.

The minimalist usage of piano/synth elements allows the vocals and the ever-complicated drums that litter this whole album give it an instant vibe that makes you wanna get up and dance. Through Hardie’s production, you almost feel as if a full band is playing this right in front of you. It’s a great example of combining live instrumentation with programmed instruments in a DAW and blending the lines in between. To me, the sound design and songwriting on this record is everything I strive for when working on my own music and his work has always been inspiring to me. Shadows and Silhouettes is the summer feel-good record of the year!

Stand out tracks from the record are:
Raindrops: An amen break-focused jazzy masterpiece.
A Deeper Blue: A liquid composition with beautiful airy vocals and super satisfying (and fun) Reese Bass.
Resistance: An unrelenting jungle assault on your senses assisted by heavy 808s and over the top technical drum sampling.

It’s true, I’m a seasonal listener. My tastes in music tend to shift based on the season. Summer days call for “summery” music. I do have music that avoids temporality, though. Today, I’ll share with you something I always come back to no matter the season: “Altas Planicies” the titular song of the album of the same name by (sadly) little-known, Argentinian singer-songwriter, Gabriela.

Driven by, at most, three instruments (her voice, a pan flute of some kind, and a floating keyboard pad instrument), “Altas Planicies” is an aching minimalist ballad that swells via emotional, barometric pressure, seemingly taking up the air of whatever place you play it in, through very subtle, scaled movements.

Like a rainy day in the dead heat of summer, in hushed tones, Gabriela sings about air itself bending under the heat of the sun and all that entails. As Gabriela describes, via impressionistic imagery and through wonderfully elegant/elegiac vocal phrasing, how such biological play forms the environment setting our quotidian dreams and realities. What begins as a barely there sentiment, swells to something truly personal — a song of remembrance and nostalgia.

Singing in a pitch and volume above the first hushed sentiment, a deep, bittersweet note begins to spark upward, vacillating through series of emotion. Music reaching to place itself in the Argentinian high lands (through melodic progression and sonic spacial breath) finds itself squarely further down in the area of hissing summer lawns, that the great Joni Mitchell once spoke about.

Glistening melodies give way to plateauing sonic space. Then, that vanishes away, giving density to just her voice. And, straining for one last time — signaling to a love that’s far beyond musical, one that’s quite spiritually tied to all our earthly cycles — Gabriela ends the song (and the album itself) in some parallel way that seems to defy gravity. In the end, a sunset that would once be a bother, seems inviting to rediscover.

Goblin Cock – Roses on the Piano

Goblin Cock is the now decade-old side project from Pinback Frontman Rob Crow and two words I wasn’t sure I was going to be able to write together on the zZounds blog. Donning cheap black Halloween robes, and mixing So-Cal indie rock vibes with the drop tuned chugs and overt machismo-ridiculousness of stoner/doom/heavy metal, Goblin Cock is a joke band that delivers some actually pretty great music.

Their fourth album, Roses on the Piano, leans even heavier into some synth arrangements and pop sensibility, though to keep things metal, it seems the memo was never passed on the the drummer and guitarist, who often slip in crushing double bass, and snappy chug riffs under weaving synth pop melodies.

Standout tracks include “Janitor” for the rippin’ congo/bongo track, “Summer Breeze” for best Seals & Crofts cover I’ve ever heard and “I Love Your Smile” for being my feel good hit of the summer.

Summertime is backyard grilling and fire pit season. It’s also outside drinking season. Simply put, there is no better album to listen to while taking part in the aforementioned summer activities, than Exile on Main Street from the Rolling Stones.

Whether you’re a life-long Stones fan, or just wanting to listen to something that is “old,” but new to you, Exile should be your go-to album for outside summertime fun.  It’s dirty, sweaty and raw…just like your sunburnt back will be after listening to this double-disc.

Released in 1972, in the midst of the band’s epic 1967-1973 stretch of their best albums ever (arguably), it will not disappoint…and will leave you wanting more Stones! Then, move onto Let it Bleed.

I’ve been really enjoying Tech N9ne’s 21st studio album entitled N9NA (pronounced Nina). While a lot of rap artists pad their albums with filler and tons of guest appearances to capture any and every fanbase they can, Tech N9ne has kept this album minimal in terms of features and has let his own voice do the talking.

Editor’s Note: While Tech N9ne’s bars on N9na are indeed fire, the language was a bit too strong to showcase here. If you don’t mind, definitely check this album out on your own!

The majority of the album is produced by Michael “Seven” Summers, a producer that has worked on music for Tech’s music label “Strange Music” for over a decade now and never ceases to amaze me. He is able to craft awesome soundscapes for Tech N9ne to lay his diverse flows on effortlessly.

N9NA is a hard-hitting album with a variety of sounds and styles that many can take notice of. Definitely not what you would expect when you hear “rap album,” its something you won’t hear on the radio waves for sure!

Hello, I’d like to talk to you today about Church of the Cosmic Skull (not to be confused with the worst Indiana Jones film). It’s a movement led by Brother Bill that’s growing daily and spreading a message of…wait, what? You don’t want to hear about our Seven Objects?

Well, maybe you’ll let me tell you about the Church’s second album, Science Fiction. It stirs a melting pot of influences, with Black Sabbath riffage, Foxy Shazam’s theatrics and the grandiosity of Meatloaf, all harmonizing in a rich, unquestionable stew. Nine tracks, many of which serve as mini-musical operas will get you singing along and your head bobbing in obedience.

Science Fiction is your summer soundtrack, whether you need to get pumped up before a council meeting or just want some chill tunes to read thetons to. I recommend new recruits start with the above track “Cold Sweat,” The title track is a banger, and so is “Timehole (Gonna Build a Rocket Tonight).”

Brothers and Sisters, don’t delay: listen to Science Fiction today. As the song says, “he’s making the minds up of the millions,” so get in on the ground floor and spread the word!