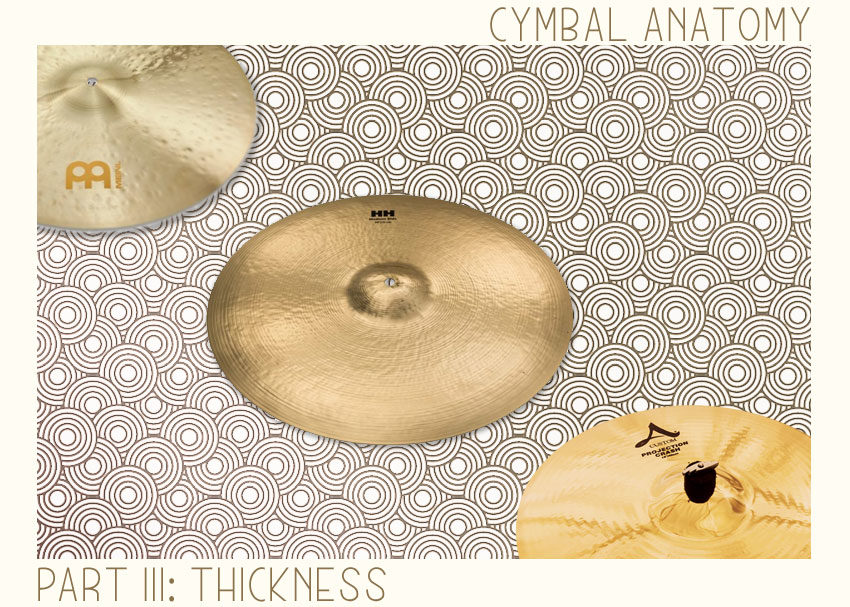 So far, we’ve discussed attributes that affect your cymbals’ overall tone, namely its hammering and lathing. Here we’ll discuss one of the most important features that affects a cymbal’s aural envelope: thickness. The thickness of your cymbal shapes everything from strike feel to its attack, decay, sustain, and release (terms familiar to synthesists that might sound foreign to a drummer).

Thinly lathed cymbals are almost universally made out of B20 bronze and are noted for having a quick attack and a short decay. This is ultimately due to the cymbal having less surface material. When you strike the cymbal, the vibration travels quickly from one end to another, and the decay can range from very short to almost instant. The barrel of thin cymbals to choose from has grown exponentially over the last few decades, not dissimilar to how drummers started opting for unlathed cymbals. Almost every jazz player in the present day is using thinly lathed cymbals, because they sit better in the back of a mix, and can be a little more receptive to stick attack. However we see more and more drummers looking for thin cymbals because of their sensitivity. Wailing on them creates a sudden and brash response, while using a light touch can really make them sing. You’ll want to be careful with these, because if you don’t have proper technique, it’s a sure thing you’ll cause a crack. For decades, the standard among cymbal makers has been medium lathed cymbals. This is the most common option on the block, and you’ll see this nomenclature advertised the most. Medium lathed cymbals sit in a special territory because they enjoy some benefits of thin and thick cymbals. With a slightly smaller dynamic range, medium cymbals do lose a tiny amount of expressiveness. However, these cymbals have a much longer decay than a thinly lathed cymbal would. You can let these cymbals sing out a little more, and you will find them anywhere from house shows, to churches, to stadiums. When you think of a washy crash, or of sloshy hi-hats, odds are the tone in your head was produced by a medium lathed cymbal. These cymbals saw a huge rise in popularity in the 1980s that has only gone down slightly over time. A thick cymbal can really take a beating, which is the primary reason for their popularity and growth. When struck with the tip of your stick, these cymbals really ping and cut instantaneously. When driven they can decay for what seems like forever. With the extra surface material of a thick cymbal, there’s simply more to resonate. Most fans of thick cymbals are going to also be fans of metal. Because of their origin in the ‘80s it becomes hard to dissociate the pinging ride sounds, and the never ending decay of a washy crash. If your band isn’t playing loud, your thick cymbals will completely overtake them. At best these cymbals can wash over your band like a giant wave, and at their worst, sound like hitting a piece of construction equipment, so you’ll want to be careful when choosing these. It can’t be reiterated enough: choose a cymbal that is right for you, and for your band. Don’t be afraid to mix up your cymbals. Odds are you have already. A lot of drummers find themselves with a thick ride, a thin crash, and medium hi-hats, without even thinking about it. Keep in mind your own technique when shopping for cymbals as well, because it’s never fun to crack a $400 ride.