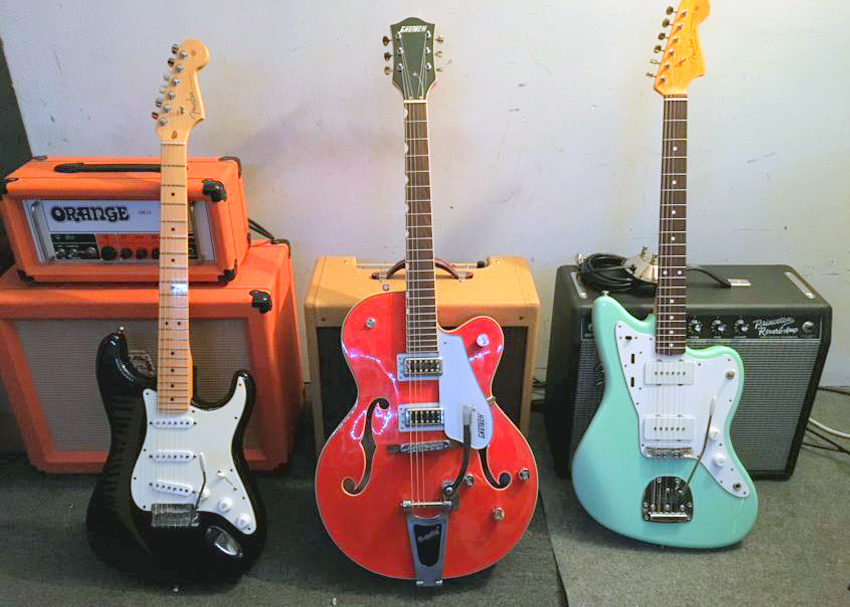 What do a Fender Stratocaster, a Fender Jazzmaster, and a Gretsch 5420T have in common?

If you said “each one has a vibrato system,” you’re correct. And, if you added an asterisk to your answer because each of their vibrato systems are different, then go ahead and give yourself a gold star. These different vibrato systems offer unique nuances that directly correlate to the style of music that is usually played with each guitar.

But before we dive into these vibrato archetypes, we must address a quick, but important point: as much as Leo Fender was a pioneer in electric guitars and amplifiers, vibrato and tremolo have been falsely interchanged for several decades, and he is in part to blame. As you can see, there is a “vibrato” channel on an amp like the 1965 Fender Deluxe Reverb Reissue, but that should be called “tremolo.” Vibrato, which we will be talking about in this post, is the act of pitch being shifted up and down, while tremolo is the act of volume dropped and rising.

Paul Bigsby was actually one of the first makers of solid body electric guitars. People usually know his name by the vibrato systems that are popular on Gretsch and Gibson guitars. Today, Bigsby makes a variety of vibrato systems designed to suit the way the neck is set in a guitar and the angle the strings follow from the tailpiece to the bridge. The Gretsch 5420T features a Bigsby B3 vibrato system. In my opinion, it’s the most subtle of the vibrato systems that we’re talking about today. It’s also mounted to the body of the guitar, unlike tremolo systems on a Stratocaster and a Jazzmaster. Bigsby vibratos are extremely smooth and feel great once you have the guitar setup to your liking and it’s settled in. The Jazzmaster is sort of a different animal to deal with, since the bridge system was developed to be used with heavy gauge, flat-wound strings when it was released in 1958. Unless the guitar is set up properly and the tension on the vibrato system is right, the strings can sometimes pop out of the bridge saddles with a heavy playing hand. When a Jazzmaster is all set up and ready to go, your playing goes from 2018 right back to the early 1960s and you just have to crank the reverb and transport yourself to southern California and play some surf rock. What sets the Jazzmaster vibrato apart from a Bigsby is the ability to change the tension and depth of the pitch shifting itself. The sensitivity on a Jazzmaster vibrato sits right between a Bigsby and a Stratocaster vibrato. It still has the smooth and slower action that a Bigsby has, but is not as dramatic as that of a Stratocaster. The Stratocaster vibrato system works much differently from a Bigsby or Jazzmaster. While the others use one spring, the Stratocaster can use up to five springs. The most common setup uses three springs in a triangle formation from the block to the anchor. Anchoring the screws tighter to the body makes the vibrato much more sensitive. The block that the strings go through actually sits on a knife edge with the two-pin bridge like on an American Pro Stratocaster and Player Stratocaster. This is definitely the most dramatic of the vibratos on this list, but is also one of the easiest to maintain. It’s probably the most common vibrato in any modern guitar, since a Floyd Rose tremolo works in a similar fashion. At the end of the day there are two types of guitarists —  those who use vibratos and those who do not. These systems are more about the nuances of playing a certain guitar and giving your playing some more life and unpredictability. I personally prefer the Jazzmaster vibrato, probably since it’s so closely related to surf rock and is subtle and easy to adjust the tension and depth of the pitch shifting. Bigsbys are great, but it can be a little bit of an issue to re-string one if you haven’t done it before. I usually have my Stratocasters decked with five springs so it can’t move.

The three recordings feature the guitars plugged straight into a 1965 Fender Princeton Reverb Reissue with all the settings at 5 with a Shure SM57 right in the center of the cone.

The Spongy Sounds of the IK Multimedia UNO SynthHow to Build a DIY SubKick
Comments: 1