iZotope RX 7: A First Look. Putting its noise-reduction module to the test. 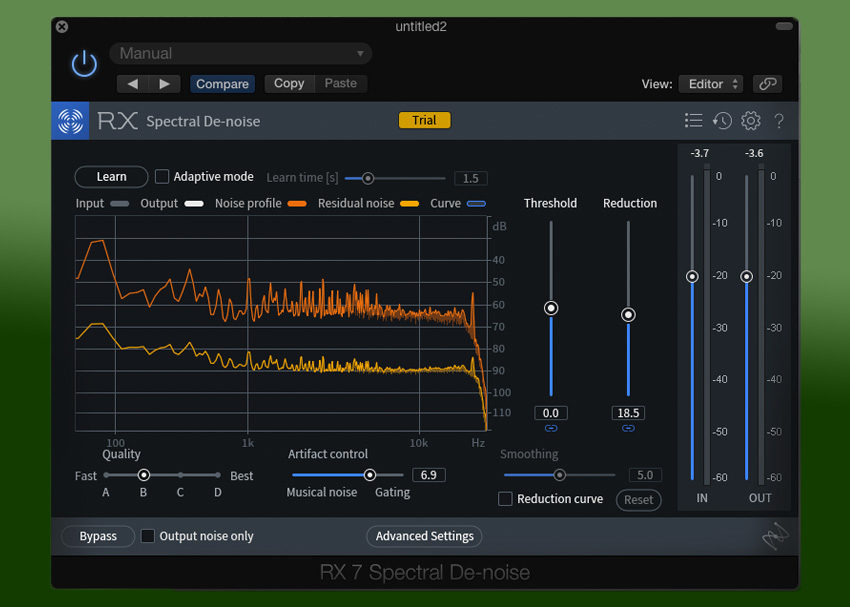 First released in 2007, iZotope’s RX software has become an increasingly popular option for audio repair work in music and post-production. One big reason for RX’s popularity is the regularity of major updates, which tend to include improvements as well as useful new capabilities. RX 7 is no exception to this rule. Packed with analyzing, editing, and “machine learning” technology, RX 7 has just what you’d expect from an RX update — substantial new features and upgrades to existing modules.

This new version adds features like Music Rebalance, which analyzes a stereo mix and then allows you to adjust individual elements, such as vocals or drums; Dialogue Contour, for shaping the pitch contour of a spoken dialogue track without affecting the timing; new modules for adjusting pitch and time independently of each other, and more.

The range of different applications for RX 7 is huge, so for this “first look” we’re going to focus mainly on noise reduction, using the Spectral De-Noise module In future posts we will be exploring some of the many other modules in of RX 7, as well as some more creative uses for Spectral De-noise. For the demo audio below I took two recordings and added some noise by recording a built-in 1/8″ computer audio input and cranking the gain until there was a lot of audible hiss and noise, and then mixed that in with the original source audio. The original recordings are of an electric guitar, and an electronic drum set. Neither recording was very noisy by itself, but I added more noise than anyone should have to deal with in most real-world music recording situations to see how RX 7 would handle it.

For these demos I had the Reduction amount set at 20.3 for the guitar track and 18.5 for the drum track (see screenshot above). In each case it was possible to increase the Reduction and reduce more noise, but this started affecting the tone of the original source a bit too much. Most users of RX 7 probably won’t be using settings that are this drastic.

As you can see from these examples, RX 7 can remove a lot of full-spectrum noise while retaining a surprising amount of definition and clarity. The possibilities for cleaning up amp buzz and preamp hiss are pretty clear, and obviously RX 7 can be used for serious audio repair and recovery work.

But RX 7 gets really interesting for music production when you consider the possibilities of using Spectral De-noise and some of the other modules for more creative uses, such as removing other, non-noise problem frequencies from electrics, snares, and more. As we continue exploring RX 7 in more detail we’ll be trying out some of those uses for RX 7, and we’ll take a look at the other included modules, too.