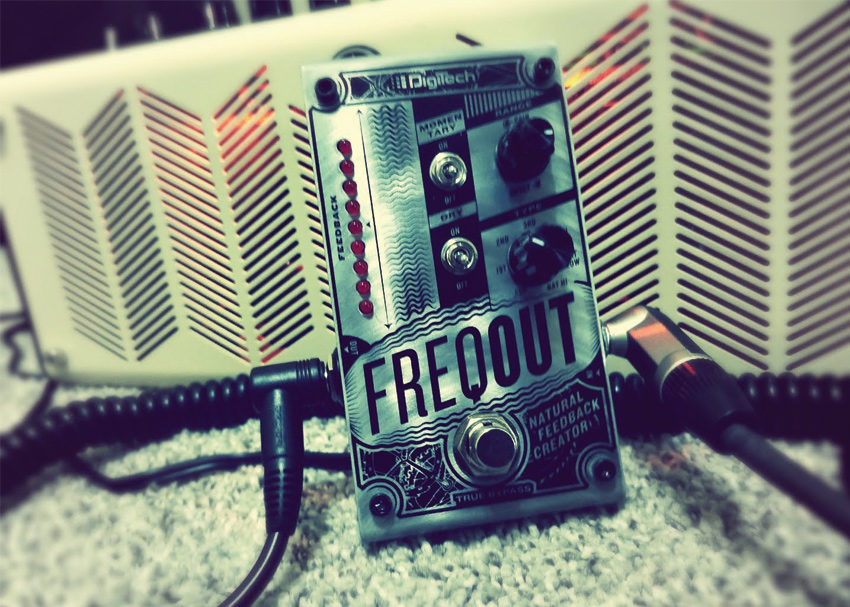 The FreqOut Natural Feedback Creator is another entry in DigiTech’s legacy of creating pedals fueled by some truly next-level inspiration. The FreqOut replicates the sound of feedback created by playing your guitar or bass close to a blaring amp. And it doesn’t just give you one tonality but seven, letting you cherry-pick the frequency of your feedback. A handy momentary on/off switch lets you select from either standard on-off operation or momentary, so that the pedal is only engaged while your foot is pressing the switch down. A dry on/off switch lets you either blend feedback with your dry guitar signal or remove it completely for tone that’s nothing but feedback. And there’s more — the gain knob adds grit to your feedback signal and also acts like a mix knob when you dry signal is on. Finally, the onset control lets you adjust how quickly the feedback comes into your signal, from instant to a slow volume swell.

To get a taste of what this pedal can do, listen to to me cycle through the various harmonics on it with a B power chord. In order, you’ll hear the sub (octave down), 1st degree, 2nd degree, 3rd degree, 5th degree, natural low and natural high settings. The natural settings generate various feedback pitches from the low and high registers of the other degrees depending on how hard you play and the settings on your guitar. The sub registered a bit too low in this example, but if you crank a bigger amp or play a higher fundamental note it’ll come through. For reference, I plugged the FreqOut straight into my Yamaha THR 10 amp, which went straight into my laptop via its USB out.

Full disclosure: we intended for this post to be a demo of not just one, but TWO FreqOuts running into an amp and blending their signals for some sweet harmonized feedback tones. Unfortunately, when I tried running two of these in series into a single amp, the feedback signal of the first pedal was overwhelmed with that of the second pedal. I suppose you could get the desired effect with two signal paths running into two different amps, but that seems like an awful lot of trouble. In any case, here’s a taste of maybe the next best thing: all of the feedback intervals blending in order, from sub to 5th. I cut out the dry signal, but these are based on an open A string. Check it out in this sound clip:

So, how would you use this effect in a practical setting? Well, if you’re a guitarist with chops superior to mine, you might use the FreqOut to add a touch of flair as the cherry on top of your ripping solo. Or if your amp is somewhere offstage, or difficult to reach, or if you’re playing a respectable gig in which turning your back to the audience and thrusting your pelvis toward your amp is frowned upon, then stepping on a pedal to engage an effect that’s very close to the real thing (and a lot more controllable) is a nice substitute.

I personally found my favorite sounds on the FreqOut by turning up the feedback gain, adjusting the feedback swell bloom at a fairly quick rate, and playing long, sustained lead lines to achieve an EBow-esque sound. Check out a little ditty I recorded using the FreqOut in such a way. Extra ambience provided by an EarthQuaker Devices Levitation reverb on the rhythm parts and the Electro-Harmonix Canyon delay after the FreqOut. Sit back, press play, and listen as the feedback opens your third eye…

The DigiTech FreqOut is worth a look for anyone who can’t pull Hendrix-at-Monterey-style moves for feedback at their regular gigs, wants sustainer effects without the hassle of a handheld device, or is just a fan of digging into pedal settings and seeing what kind of new sounds arise from their experiments.