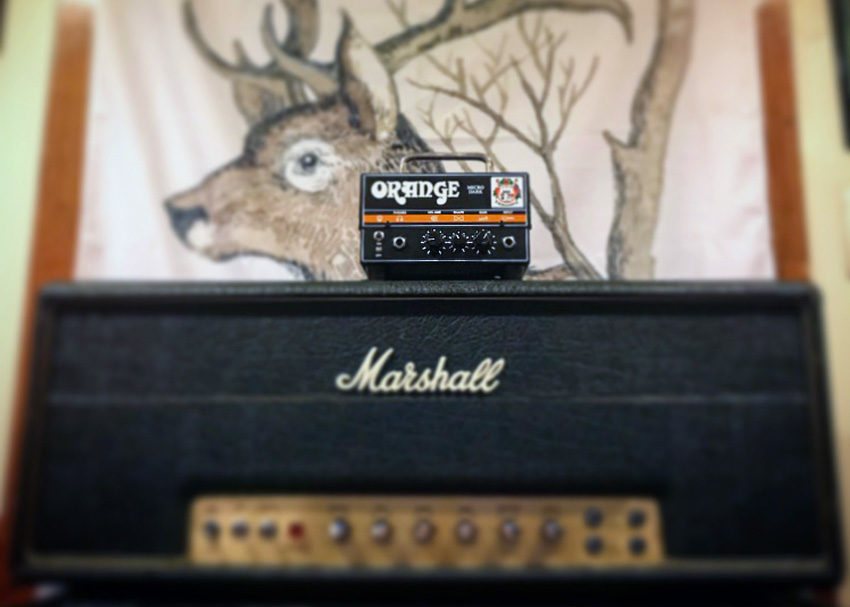 What guitarist doesn’t dream of being up on stage, shredding out hot licks from a monolithic wall of blaring amp stacks? It’s the quintessential, “famous rock star” look. Rarely though do you stop and really think about what that would sound like, and the fact that most of those bands are standing in front of a wall of plywood dummy cabs. To quote the manual for the EarthQuaker Devices Transmisser – “It’s like pulling back the cape of a wise old wizard and discovering that the wizard is, in fact, wearing shorts and just wants to take it easy.” When I got my first “real” amp, an affordably priced 1×12 combo, it seemed like a colossal monster of tone compared to the 5-watt no-name practice amp that came with my first guitar. As soon as I could, i started dragging it over to all my friends houses to jam along with them. As all of us were in middle school, we all had cheap, accessible combo amps. After I joined my first band and eventually managed to book some terrible show, I set it up on the back wall of the VFW hall with the other bands’ gear and I was faced with a line of 100-watt half stacks. My little 1×12 combo looked weak and diminutive and made me feel even more like the wet-behind-the-ears teenage musician that I was. I even remember helping load out another guitarist’s gleaming, diamond plate, 150-watt Triple Rectifier and matching 4×12 thinking it was the nicest piece of gear I had ever touched.

I realized that a new need in my life had to be fulfilled — more watts. And to quote Aqua Teen Hunger Force, “when you need something that’s a responsibility.”

Eventually I wound up with a Sovtek Mig 50 and Marshall 1960 4×12. This rig sounded great blasting through my friends’ basements and DIY venue space, but once I finally made it to a stage with a somewhat decent PA, the sound guy was none too happy about my non-master volume 50-watt half stack. That’s when I really started to learn that more isn’t always better when it comes to amplifier wattage. A friend in another band with a Fender 22-watt Deluxe Reverb set up, mic’d the amp, and after a quick sound check, sounded amazing. I had to play the set with virtually none of my amp in the PA, while his small amp was pushed through the PA and sounded massive. We both had pretty good sounding amps tonally, but his was much more manageable. “Sound guys hate him for this one simple trick of plugging in all those amps!”

First, to really get a grasp on ‘power’ and wattage when it comes to guitar amps, we need to get a bit scientific. If you’re not already familiar, volume levels, or more importantly SPL (Sound Pressure Levels) are measured in decibels (dB), and a 1dB difference is loosely defined as the smallest change in sound level that is noticeable — hear for yourself in this 1 decibel sound test. But really “volume” isn’t the best term to use. While we refer to volume when speaking about sound levels, there isn’t really an absolute measurement for volume, its subjective to the listener. That’s why your dad always yells at you turn your stereo down, but to you, that Ratt riff isn’t nearly loud enough. SPL or Sound Pressure Level, is a more definitive measurement, and a 6 to 10db increase is regarded as doubling the SPL or what most people would refer to as “volume”. Often what guitarist don’t realize that is the relationship between wattage and perceived loudness isn’t linear. This is why a 100-watt amp isn’t twice as loud as a 50-watt amp. In reality, doubling in power is equivalent to roughly a 3dB increase in SPL.

Here are a few references to get an idea of decibel level:

To put this into context, If you crank a 15-watt Vox AC15 and its 12″ Celestion speaker, the amp will hit roughly 103db. In comparison a Marshall JCM 800 50-watt half stack tops out at around 107db. Even with 35 more watts and three extra 12″ speakers, the Marshall doesn’t do a whole lot more damage. Now, I’ll admit this is an oversimplification and doesn’t consider solid state amps, the relationship of volume vs gain, etc, but it gives you a general picture. Guitar amps began as modified portable PA systems and by the mid ’50s were usually around 15 watts or less. Interestingly it wasn’t until surf rock rolled in around the early ’60s that larger, more powerful amps were needed, as Dick Dale was pushing his amps to play louder and louder, eventually helping Fender develop their first 100-watt guitar amp, the Showman. He even earned the nickname the “Father of Heavy Metal” for this. Meanwhile across the pond, Vox developed the Super Tall AC 100, or as it was known in the US, the Super Beetle, to help bands push their stage volume for the large arenas and amphitheaters they were starting to play.

This all made sense, as PAs at the time weren’t built to handle loud rock bands. All the work really had to be done by the backline, so amp wattages went up. Eventually though, PAs caught up, and now at any arena rock show you see there are towers of line-array PAs pushing not only the vocals, but the guitars as well. It’s not uncommon for a giant arena rock band to have a few isolated 15-watt combo amps at the heart of their rig.

The problem is that the golden era of guitar amps occurred in this middle flux period when bands were using loud non-master volume amps by necessity. To really get the iconic tube-saturated crunch tone, you have to push your amp. On a 50-watt amp with no master volume switch, that means you get up there in dB before you hit that sweet spot. As we know by exploring artists for our Legends of Tone series, the vast majority of iconic classic rock, was made with a high wattage Marhsall. I’ll be the first to say, a dimed Marshall Plexi through a 4×12 sounds, and more importantly, feels like nothing else, but it’s incredibly impractical.

Luckily, Now as compared to even just 10 years ago, there are many lower wattage options out there. If an amp line isn’t available with a lower 30-watt or so version, than there it likely has a half-power switch. Most importantly, this means that getting into the tube-saturation sweet spot of tone, you don’t need to hit massive dB levels.

Here are just a few examples of great sounding, low-wattage amps. The majority of this list is tube-based amps, as that’s really the tone that can be difficult to get at low volumes. If the majority of your tone is coming out of your pedalboard, a good solid-state amp isn’t hard to come by and will really work at any volume.

Who doesn’t love Marshall Plexi-style tube tone? The Origin series harkens back to Marshall’s golden years, and with the Origin 20H you get a manageable power section. But that’s not all — you can even select the mid power section to jump down to 3 watts, or use low to go all the way down to a half a watt. The Fender ’57 Custom Champ is a little beast of an amp. At just 5 watts with an 8″ Weber speaker, this tweed tube amp has plenty of that ’50s Fender tone, and was used on recordings by Johnny Cash, Keith Richards and Joe Walsh. Also, it’s the amp “Layla” was recorded on, so there’s that.

We used a similar, vintage Fender Champ in our Walrus Audio Emissary Demo.

The Orange Micro Dark Terror Mini is my go to small bedroom amp. It may only have volume, shape and gain knobs, but it’s pretty well internally dialed-in so you can get a lot of just those three knobs, including some great distortion tone. For a little more classic Orange tone you can try the non-Dark version.

As mentioned before, the original 100-watt Super Beetle was initially designed to be blasted at arena shows. This year at NAMM, Vox revealed their diminutive 25-watt 1×10 Mini SuperBeetle. But if you have a 4-ohm 4×12 cab, you can get up to 50 watts. Love them or hate them, my personal opinion is that NuTube does a pretty great job of sounding like a tube. No, it’s not 100% there, but I’m also tired of rock dads saying you can’t REALLY sound like the Eagles without whatever specific vintage tube amp.

If you really wanna rip some hot arena rock hammer on/pull of riffs with out the arena volume levels, this 15-watt lunchbox version of the 5150 III is for you. With both the Green and Blue channels there, you can still relive your Sunset Strip glory days, without blowing your hairplugs out.

Another popular option are the Tweaker series amps from Egnater. Mostly due to their ability to be drastically “tweaked” by a series of mini-switches, going from modern to vintage voicing as well as British, American, and “AC amp” sounds. There are a number of amps that boast that kind of feature set, but the Tweaker does a good job of actually living up to its tonal claims. Plus it comes as a combo or mini-stack with a head and 1×12 cab.

Additionally, if your lower-wattage amp just isn’t quite giving you the saturated and compressed tone you’ve been hunting for, a good boost pedal can go a long way. A lot of the tone that guitarists love exists in the area where you’re in the sweet spot of the mid-hump from a boost pedal reacting with a saturated tube amp. Tons of times I see bands playing with higher-wattage amps and their volumes are set below 4 or so. I’ve played with bass players that say anywhere past about 2-and-a-half on their amp is too much. So many players are essentially buying a Maserati and then driving it through a school zone. You can have a lot more fun going full bore on a moped than riding a Gixxer racing bike around in second gear. There is no denying that big tube amps sound amazing when cranked, but that magic tone they have often only exists at crushing sound levels. It may seem obvious, but instead of buying a big amp and turning it down, get a smaller amp and crank it.