Using Varispeed in Your Recordings 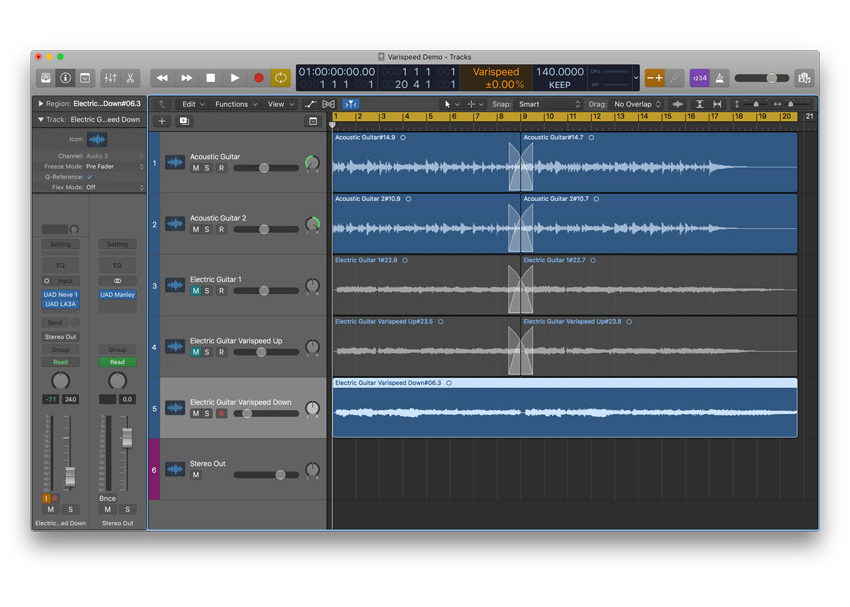 Varispeed recording is a really interesting and easy studio trick that can add textures and otherworldly timbres to vocals and instrument tracks. I happened to be listening to some Ween recently and thought the way Gene’s vocals sounded on some songs had a slightly unreal quality to them. As I thought about it a second, I remembered the old Alvin and the Chipmunks trick of varispeed recording.

If you’ve never heard of this trick before, it was used in order to produce the high-pitched speaking and singing voices that made the rodent trio famous. The recording engineers would play back the tapes at half-speed, resulting in a slower tempo at an octave below the regular pitch. The engineers would then record the singers singing at their normal pitch while playing back the slowed down backing tracks. Once the recording was complete, you could play the tapes back at standard speed to hear the vocals an octave higher, while the rest of the backing tracks sounded normal.

Thanks to the computing power of today’s DAWs, varispeed recording is a relatively simple technique to employ. I created the instructions and audio samples with Logic Pro X, but any professional quality DAW should have this ability.

First thing’s first: I created a backing track by double-tracking an acoustic guitar chord progression. As a control sample, I recorded a simple lead line, which will be the standard by which all the other samples should be judged. Select “Customize Control Bar…” to get to the right place.

After laying down the backing tracks, the fun really begins. First, find the drop-down arrow next to the LCD screen on the Control Bar and choose “Customize Control Bar and Display…” At this point, a menu window should pop up, listing a number of tools you can select or deselect to put on your Control Bar. Under the “LCD” section, you’ll see another drop-down menu. Choose “Custom” to allow you to select (or deselect) various components of the LCD screen, including the option for “Varispeed.” Make sure to select this option and click OK. Select “Custom” on the dropdown menu under LCD. Make sure “Varispeed” is selected.

Once you’ve added the Varispeed option to the LCD, you should see it up there with an orange tint to it. On the Varispeed portion of the LCD, there will be yet another drop-down menu. Click on that and choose the option “Varispeed (Speed and Pitch)” so that the pitch will also change according the the selected speed you choose.

You’ll want the pitch to change too, so select “Varispeed (Speed and Pitch).”

For this next sound sample, I adjusted the varispeed to +50%. This raised the pitch a fifth, so I had to transpose the lead line in order for everything to sound right. Listen to how the backing acoustic guitars have been sped and pitched up, yet the lead line still has the timbre of a normal electric guitar.

After recording the lead line, I then turned the varispeed back down to 0%. Listen to how the electric guitar’s sound has stretched and distorted quite a bit, while the pitch returns to normal, albeit shifted back down to the original key. The part doesn’t quite sound like a bass, but it also doesn’t sound like a regularly recorded guitar, which I think can add some richness and texture to your recordings.

To show the “Chipmunk” effect, I slowed down the varispeed control to -50%, which slows down the backing tracks sound exactly an octave down. I played the lead line at exactly the same position as I did in the first example. When we return the varispeed control back to 0%, you can hear how the guitar shifts up an octave. Unlike using an octave pedal, however, the texture and timbre of the guitar has changed to almost a cartoonish quality. To my ears, it doesn’t sound like anything that could be produced in real life, giving it an otherworldly quality.

Try using this technique to add interesting, textural parts that will spruce up any arrangement. I’ll be honest, however, doing the trick correctly does take some practice. I would highly recommend using a click track. Playing these parts at a faster speed narrows down your margin for error quite a bit. On the other hand, staying on time with the slowed down backing tracks could prove to be a little frustrating. Of course, this is just something a little practice will take care of in no time. Perfect for use on vocals, guitars, keyboards, and really anything, varispeed can add some creativity and variety to your recordings. You might even make some listeners scratch their heads and wonder, “what the heck was that?” And on that note, here are some acoustic guitars that sound like ukuleles. Enjoy!