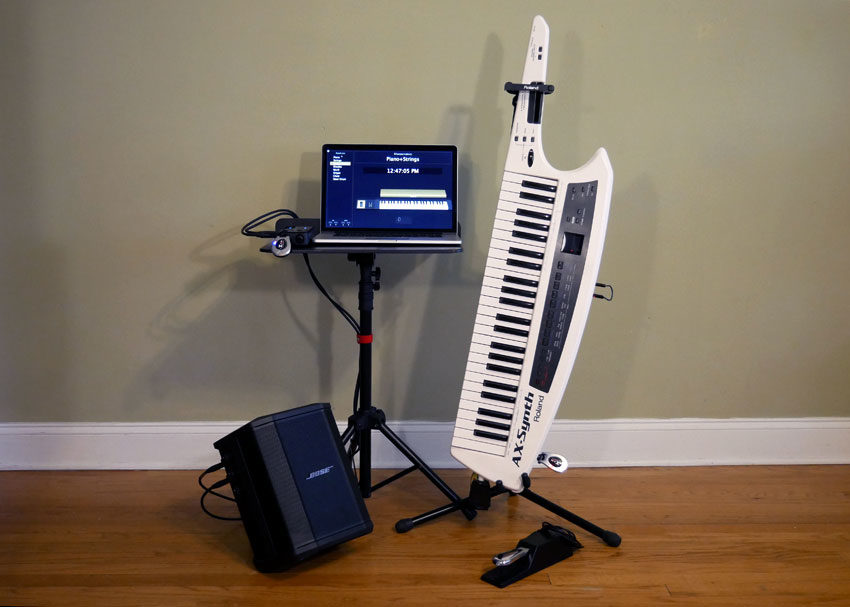 Playing keyboards is my jam, but schlepping a lot of gear around is definitely not. My main gigging board is a Roland AX-Synth Shoulder Synthesizer — or a keytar, as it’s affectionately known. Besides the keytar’s distinctive look, the appeal of this board is its eminent portability. But there comes a time when you need more than what your keytar’s on-board sound engine can provide. That’s when it’s time to get a Yamaha MD-BT01 Bluetooth wireless MIDI interface and a laptop loaded with software synths. Read on for a closer look at this keyboard rig that gives you access to myriad sounds while remaining ridiculously easy to carry.

Most Portable Keyboard Rig Ever?

The Roland AX-Synth weighs about 10 pounds (even with 8 AA batteries in it), and although it’s longer than the typical 49-key board, it can squeeze into a 61-key keyboard gig bag (I use one of the Fusion keyboard bags) along with its stand, sustain pedal, and cables. Add a 15-pound Bose S1 Pro or the 16-pound Roland KC-220 as your (battery-powerable!) keyboard amp, and you’ve got a super-lightweight keys rig.

This stripped-down setup serves me well for small shows. But while the AX-Synth has decent internal sounds, it’s not multi-timbral, which means it can only play one sound at a time — no splits or layers. It you need to do piano plus a string pad, or if you want to trigger arpeggiated synth bass with your left hand while playing sick leads with your right, the on-board sound engine isn’t going to cover it.

That’s when it’s time to put your keyboard into service as a MIDI controller for software synths on a laptop…wirelessly!

Adding Wireless MIDI to Your Keyboard

Some keyboards, like the Alesis Vortex Wireless 2 or ROLI Seaboard Block, have a built-in wireless MIDI system. If yours does not, never fear — the Yamaha MD-BT01 Bluetooth wireless MIDI adapter is here. Plug this bad boy into your MIDI controller keyboard’s 5-pin DIN MIDI ports, and it’ll send MIDI data from the board to a Bluetooth-enabled computer or tablet, allowing you to trigger sounds in software instruments. The MD-BT01 was simple to set up on my MacBook Pro. Plug it into your keyboard’s MIDI IN and MIDI OUT jacks, and it (magically) lights up red. On your Mac, turn on Bluetooth, open Audio MIDI Setup, go to Window > Show MIDI Studio, double-click the Bluetooth icon, and bam — the MB01 pops up in a list of MIDI Bluetooth devices. Hit the Connect button, and you should be feeding MIDI to your computer.

In order to truly appreciate the freedom that comes with adding a wireless MIDI transmitter to your keyboard, you need your keyboard to be battery-powerable. Roland AX-series keytars are a bit hard to come by on the used market, but they’re definitely not the only battery-powered keyboard with 5-pin MIDI output. If you’ve got a Korg Monologue, or any of the MicroKorg boards, then you can use the Yamaha MD-BT01 wireless MIDI adapter to go fully wireless.

Apple calls their MainStage software a “live-performance companion app for Logic Pro X.” However, that description is a bit misleading: you definitely don’t need Logic Pro to download, install, and run MainStage on your Mac. MainStage, all by itself, is a powerful, flexible host for your software instruments. It’s surprisingly inexpensive, and like its bigger brother Logic, it comes with a wealth of sounds (up to 51 GB!) that you can mix, match, split and layer in Patches.

Beyond its vast library of free sounds, MainStage can also host any third-party software instruments that use the Audio Units (AU) plug-in architecture, such as Native Instruments Komplete, Spectrasonics Keyscape, or IK Multimedia’s SampleTank. Really, your only limit here is your hard drive space. If the idea is an ultra-portable keyboard rig, you don’t want to be carrying around an external hard drive. My go-to software instrument plug-in is AIR XPand!2, which only eats up a few GB, but includes thousands of tweakable sounds, with four slots for layering and splitting them. I built several Patches in MainStage, each with an instance of XPand!2 loaded with my must-have sounds. Once I had all the Patches built, I didn’t even need to touch the laptop to switch between sounds in MainStage: the MIDI Program Change buttons on my AX-Synth let me scroll through patches, wirelessly from up to 50 feet away. Magic!

Apple MainStage is known for its stability (which is why it’s used on big tours and Broadway shows), but you can use any DAW that hosts software instrument plug-ins — like Ableton Live, Reason, or Pro Tools. I tried the Yamaha MD-BT01 Bluetooth MIDI interface with Avid Pro Tools 2018, setting up 8 different Instrument Tracks with different software instrument plugs. To switch between patches, I just record-enabled the track with the plug-in I wanted to play at any given time, and the MD-BT01 worked like a champ, with no discernible lag.

Clean Audio Output From Your Laptop

When you have your keyboard controlling a laptop that’s loaded with a million awesome sounds, you need an audio interface that will do your sounds justice. Using the headphone output from your laptop is OK for practicing in headphones, but it’s a no-no if you’re sending a signal to the PA for a live show — your laptop’s built-in digital-to-analog converter (DAC) just won’t sound as good (or as loud) as a dedicated USB or Thunderbolt audio interface.

With portability as my number one priority, I went with the IK Multimedia iRig Pro Duo USB interface, because it’s tiny. More solid choices for portable USB-powered audio interfaces include the 2nd-generation Focusrite Scarlett 2i2, the PreSonus AudioBox USB 96, and the Apogee Duet. Remember, for the purposes of getting sound out of your computer, you don’t need to worry about the input preamps the audio interface has on board. For this keyboard rig, you simply need a pair of balanced line-level outputs for a proper connection to your amp and the PA system.

But What If My Computer Crashes?

Laptop rigs always pose this risk. If my computer crashes, the backup plan is to use the AX-Synth’s on-board sounds, with wireless audio thanks to the Xvive U2 wireless system (it’s not just for guitars anymore!) Plug-on guitar wireless systems like the Xvive or the Boss WL-20L system are perfect if you want to go wireless while using your keyboard’s built-in sounds. I plug the Xvive U2 transmitter into the keyboard’s MONO L output, and the Xvive U2 receiver into wherever I need to send audio — the 1/4″ inputs on the audio interface, the Bose S1 Pro I’m using as a keyboard amp, or a DI box to connect to the PA. My rig weighs approximately nothing and runs on batteries. Get outta here.

Keytars are known for being “so bad they’re good,” which is a reputation you must embrace if you’re going to build your rig around one of these bad boys. This instrument will turn heads — but I didn’t pick up a keytar so I could be like Herbie Hancock, or Lady Gaga, or the next hot keytar player. I just got the AX-Synth because I was tired of schlepping around a heavy stage piano. As a seasoned keytarist, I can say that more people actually dig the instrument than think of it as a joke. And if anyone does laugh at you for playing the keytar, that’s your cue to 1.) laugh with them, and 2.) impress them with your mad chops…and your amazingly portable keyboard rig!

Bringing Your Guitar Back From the Dead (of Winter)Summer NAMM 2018
Comments: 1