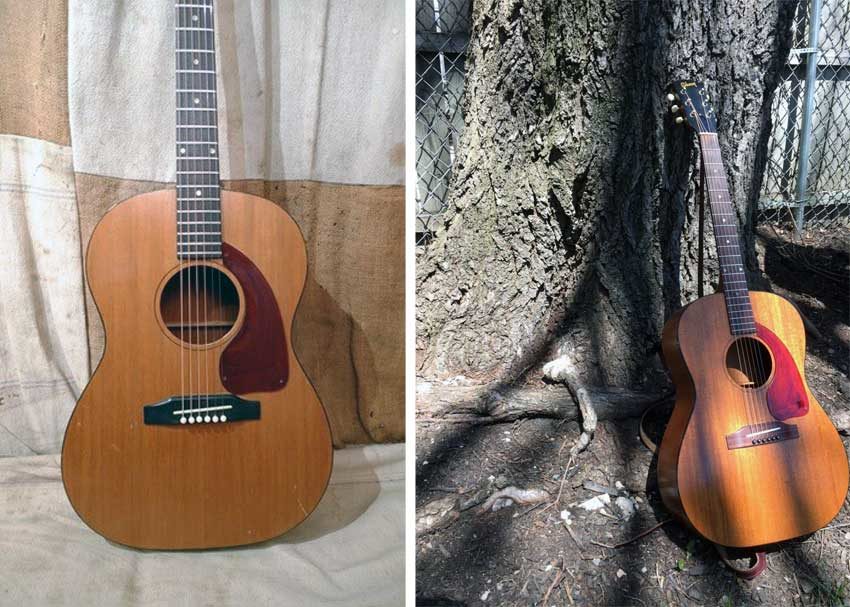 Hello. My name is Patrick and I’m a guitar addict.

My most recent acquisition is a vintage 1965 Gibson LG-0 acoustic guitar. This model was Gibson’s student level guitar when it was released in 1958 since it lacks some features and has laminated back and sides. The guitar isn’t in mint condition. It has a few dings here and there, but it tells a story. The most common modification to these guitars is having to get the bridge replaced because it’s plastic and is bolted to the top. I’m usually against modifying an old piece of gear, but replacing the bridge will preserve the guitar and actually make it sound better. Soon after I got the guitar, I took it to a local luthier to get a new rosewood bridge put on.

I’m really into the history of old guitar companies like Gibson, so it’s cool to think that the same Brazilian rosewood fingerboard and Honduran mahogany body of my LG-0 was the same wood that was used on the Les Paul Standards made from 1958 to 1960 that sell for over $250,000 today. It was made by the same people, in the same factory in Kalamazoo, Michigan. It has the magic that some guitars lack, but it also has a few limitations just like any other guitar would have.

Certainly the most incredible thing about this guitar is that it is a time piece. The same song wouldn’t be written on this old, battered Gibson and a Yamaha acoustic that I’ve had since 2007. It absolutely nails the soft strumming sound that sits in the mix without a lot of ducking out low end. Think Americana bands from Nashville and folk singers from the west coast. You can’t get that from any other guitar.

The LG-0 is a small body guitar, so I play it on my days off on my back porch, before work while drinking my coffee, and when I get home from work on the couch. It’s the perfect companion to anyone’s day. I can just tell that I’m holding something special, and that can’t really be duplicated.

For the recording, I used an AKG C315 on the cardioid pattern into a Presonus Audiobox straight into Logic X. The strings on the guitar were Martin Retro custom lights; I’ve found that these strings tend to work really well with small, all-mahogany body acoustic guitars.