Double-Tracking Electric Guitars. Or, Why You Shouldn't Copy/Paste Your Doubles. 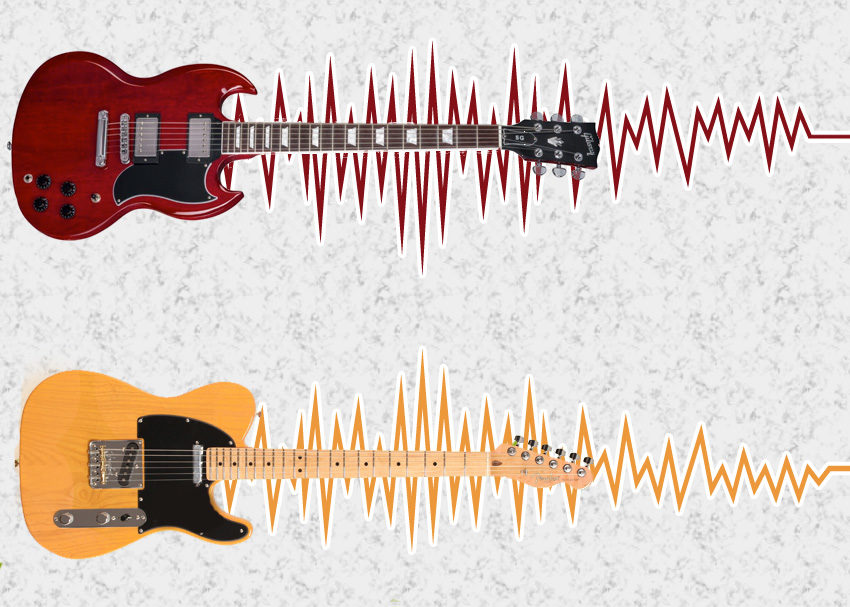 Ever since digital recording surpassed analog as the norm, musicians have been exploiting the format to its fullest capabilities, not only to streamline workflows, but to also create new and interesting sounds. The ability to copy and paste regions in your DAW has really helped producers and mixers push creative boundaries in the last few decades. As it turns out, however, some old-school techniques still hold their own in this digital age. Despite taking more time, skill, and precision to accomplish, double-tracking your takes adds a richness to the song’s overall sound that a copy-and-paste job simply cannot replicate.

To record the audio samples, I used two guitars, a Gibson 2018 SG Standard and a Fender American Professional Telecaster. These guitars were plugged straight into a Universal Audio Arrow interface and brought to life with the help of various UAD-2 amp models. I also created a simple MIDI drum track in Logic Pro X to simulate how the different tracking techniques sound in a band setting. In the first audio sample, I used a Gibson SG to create a sonic foundation. This single guitar track is going through a Marshall Plexi model for a buzzy, organic overdrive and has been panned a little to the left. While the track itself sounds great, perhaps the overall guitar sound needs to be beefed up a little bit. Instead of turning up the gain on the amp, you can try double-tracking the part. In case you don’t know, double-tracking is a technique in which you record a part twice, separately. This adds heft to your sound without drastically altering the tone. You can try this technique with any instrument, yet in my experience it particularly suits vocals and guitars.

One way you might thing to go about this is to simply copy the recorded track, paste it to a different track, and then pan each track hard left and right. As you can hear in this second sample, attempting this technique doesn’t really make the sound bigger or wider, but rather gives your guitars a seemingly louder mono sound. After you’ve listened to the subsequent tracks, you’ll hear why genuine double-tracking is the way to go.

In the third example, I recorded a second track with the SG and panned it to the right. You should be able to instantly hear how the two parts play off each other to create a bigger, more interesting sound. Although you want your playing to tightly match the original track as close as possible, the small, inevitable nuances between the tracks are what create the bigger sound.

To really make some head-turning sounds, try using a different guitar on your doubled track. For the fourth example, I added a Fender Telecaster to the mix, playing through the same settings on the Marshall. Even though I’m using the same amp for the double, the Tele’s distinct tone adds another layer of intrigue to the music. In the fifth example, I’m really trying to spice things up by sending the Telecaster through a Fender Deluxe amp model. The completely different tone adds its own flavor to the overall mix to make your song even more interesting. The warmer rumble of the SG/Marshall plays well with the brighter sound created from the Tele/Deluxe combo. In my opinion, this is the best combo of tones as it sets up the perfect foundation upon which to lay down some killer vocals.

Finally, example six includes a few more SG and Tele tracks, this time overdubbed only during the chorus to add some meat to that part. I ran both the guitars through the Marshall Bluesbreaker model for some seriously creamy overdriven tone. The original SG and Tele tracks were panned about 50% left and right, so I panned these overdubs 100% each way to not only add heft to the chorus, but to also widen the part out when the guitars hit. I also paired each side with its opposite, with each side getting a SG/Tele pairing to really fill out the sound. Experiment with the guitars, amps, and amp models you have on hand to kick your guitar tracks up a notch. In a pinch, you can even use effects like chorus on the double-tracked guitar to give it a different flavor, ultimately delivering a fatter guitar tone. Whatever you do, just don’t take the easy way out by copying and pasting your tracks. Trust me, the extra work goes a long way in producing a much better recording.