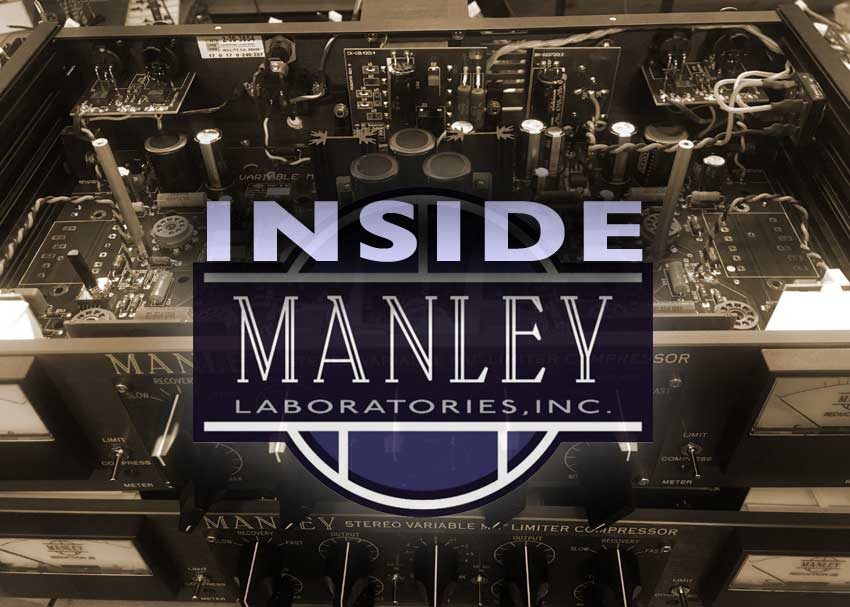 Manley Laboratories is the name behind such venerable tube-based studio gear as the Massive Passive EQ, VOXBOX channel strip, Manley Reference Cardioid microphone, and much more. Check out our photo gallery, and take a look inside the Manley Labs factory in Chino, California! 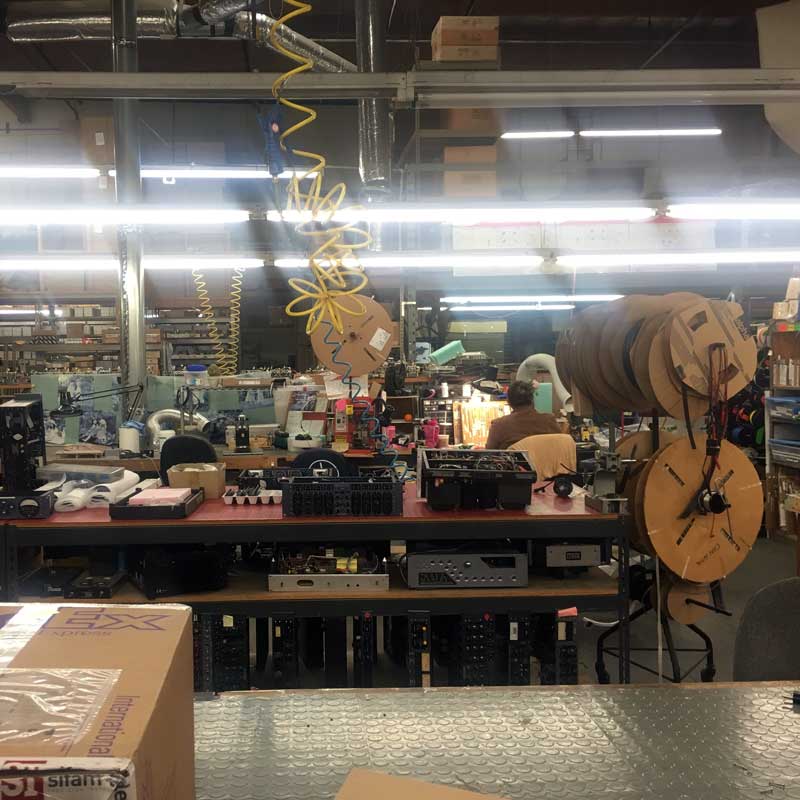 The Manley Laboratories factory is the birthplace of legendary studio gear — like the Massive Passive equalizer you see chilling on this workbench. It’s all assembled by hand right here in Chino, California. 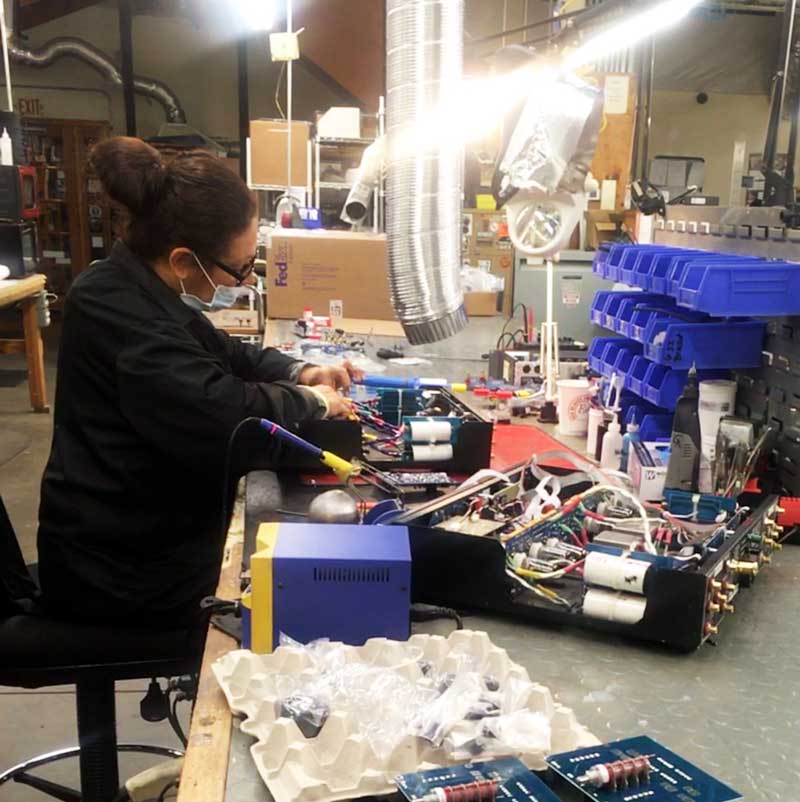 On the factory floor, Manley technicians are hard at work assembling the company’s famous products. 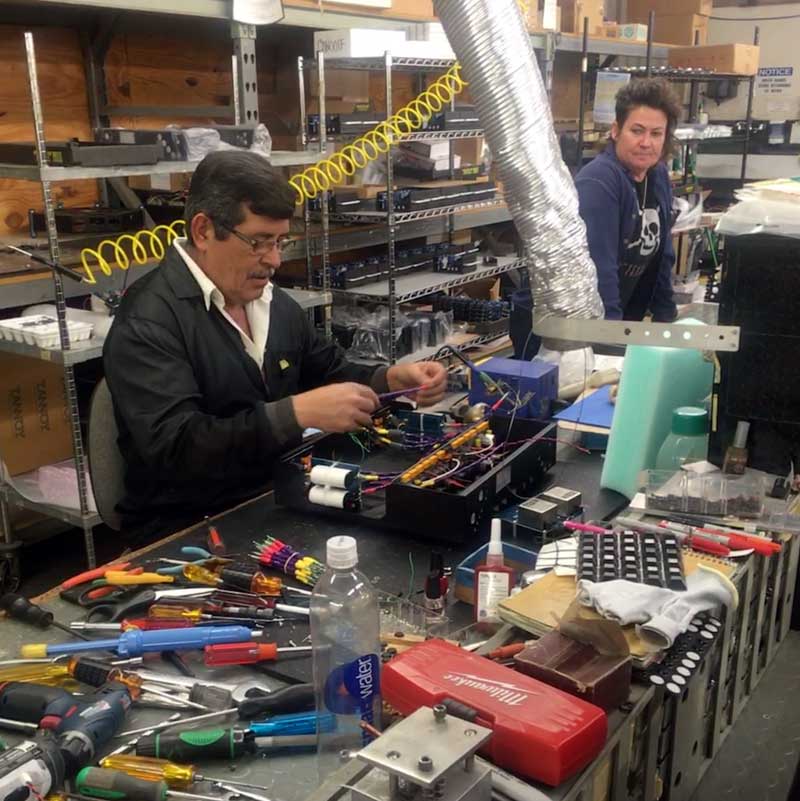 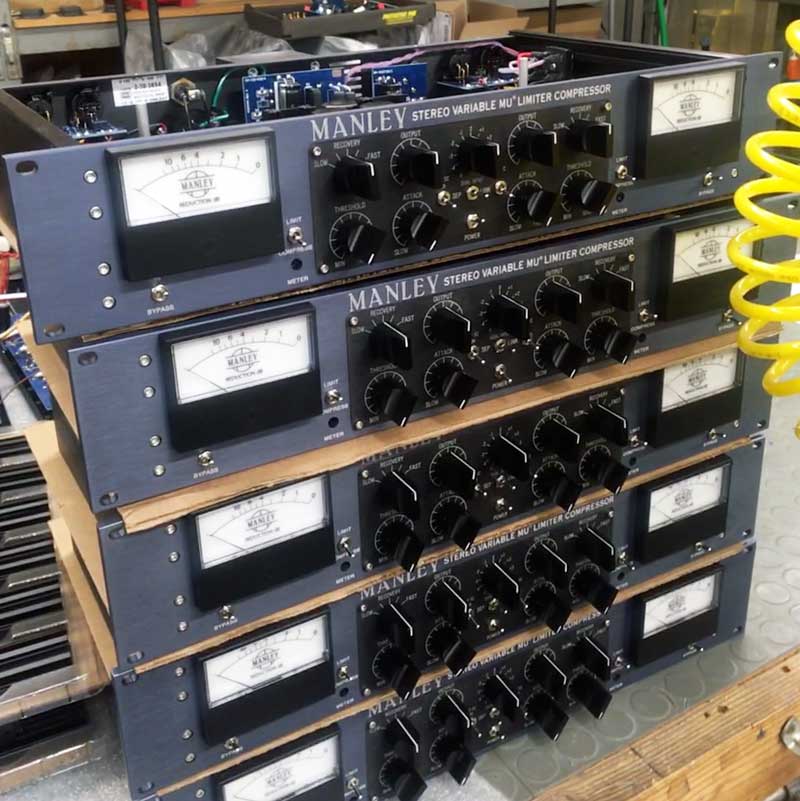 This is the most Manley Variable Mus you’re likely to see in one place. Even the output transformers for the Variable Mu are wound right here on site. “Having the same guy winding all these things from the same drawing, on the same machine, since 1995 — every part we make is exactly the way we want it to be,” says EveAnna Manley. 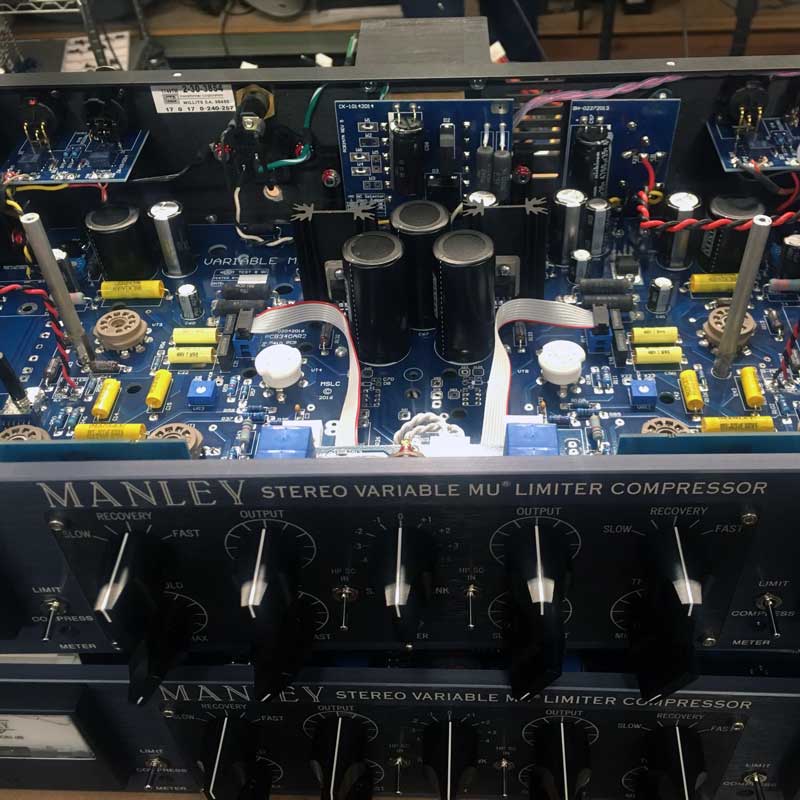 The classic Variable Mu compressor is one of Manley’s older designs, dating from 1994. Here’s a look under the hood of this venerable beast. 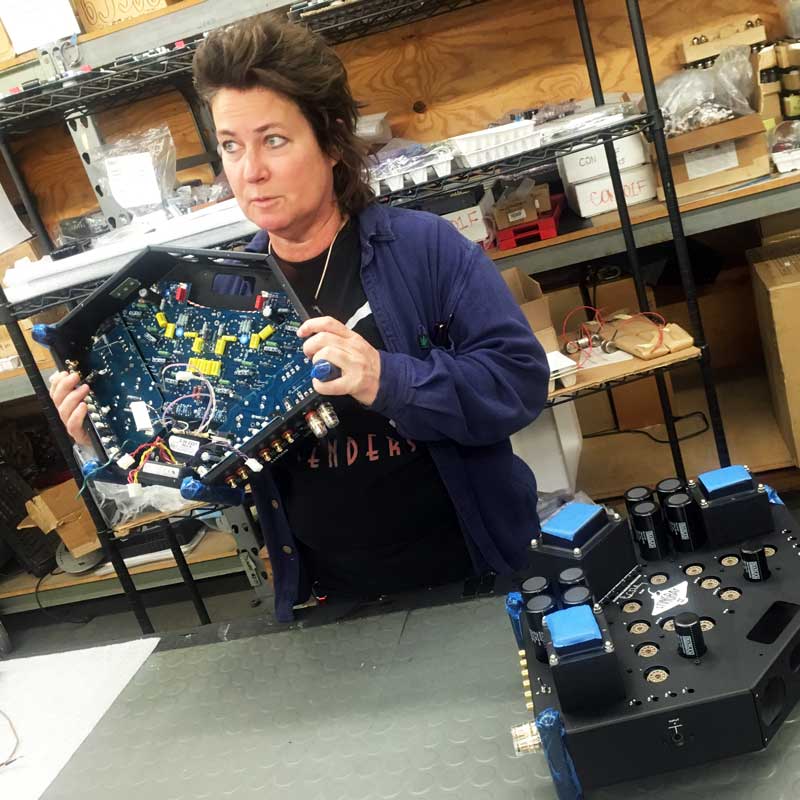 EveAnna Manley shows off the “guts” inside the Stingray hi-fi tube preamps. The vinyl renaissance of the last few years has been a boon for Manley’s hi-fi business, with their Chinook phono stage being a top seller. 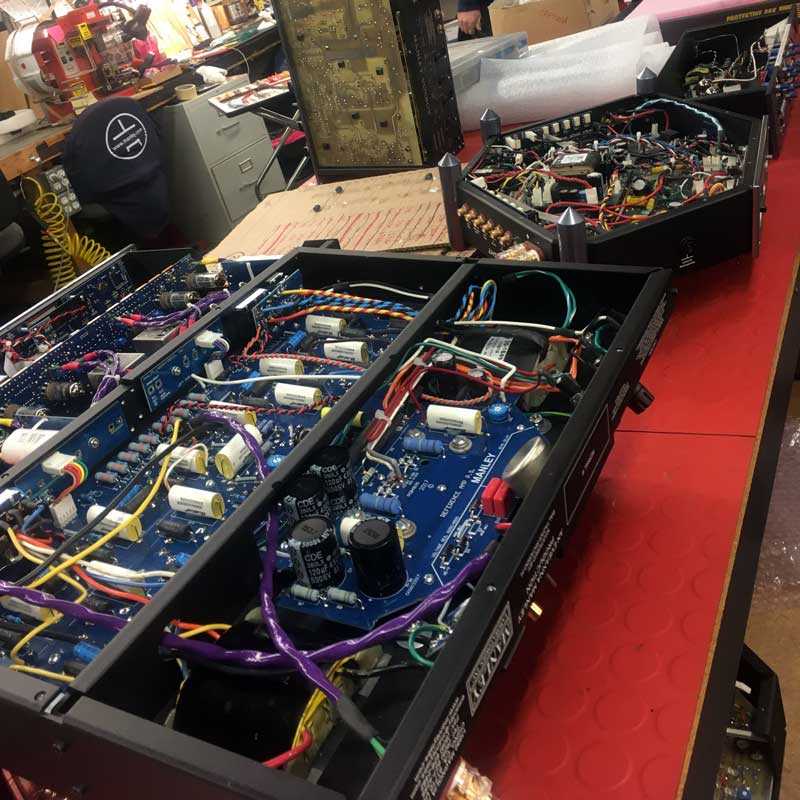 Throughout the factory, you’ll see Manley gear in the process of assembly. Each unit takes several hours or days to build. “We’re assembling all kinds of stuff at one time. Hi-fi products and pro audio, it’s all built the same way.” 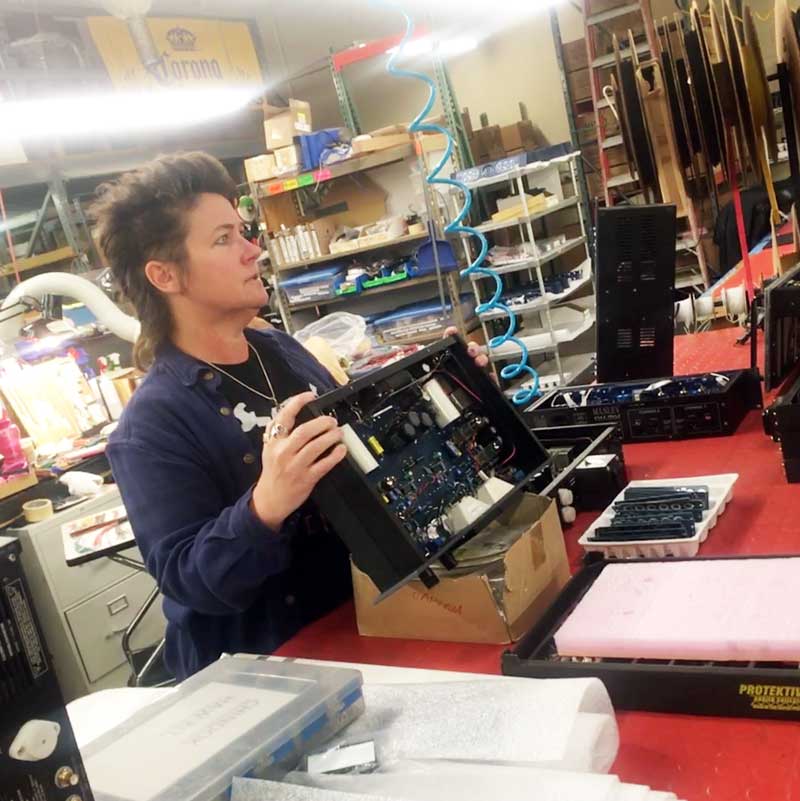 EveAnna describes the differences between the original Manley ELOP compressor that’s no longer in production, and the modern ELOP+ compressor — redesigned with input from legendary producer/engineer Ross Hogarth, who’s been relying on the ELOP for decades. 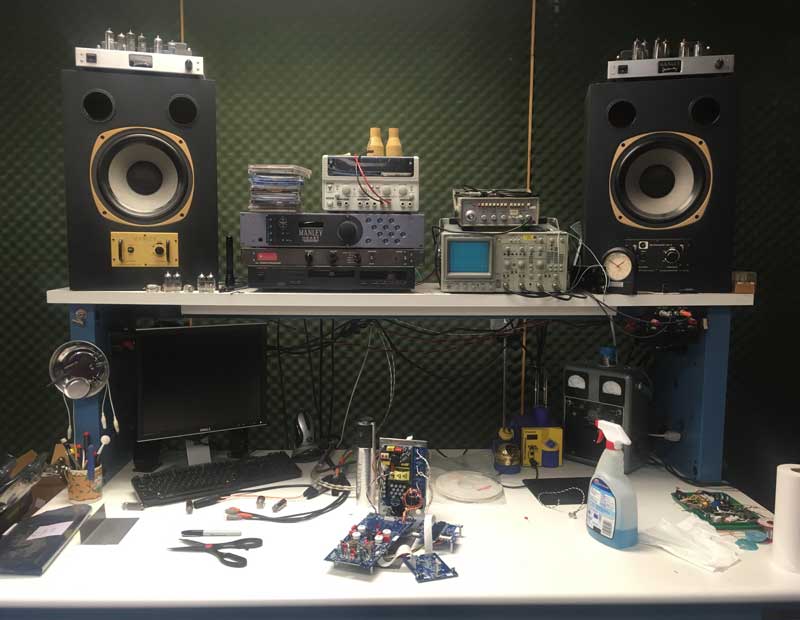 What if this was your desk? 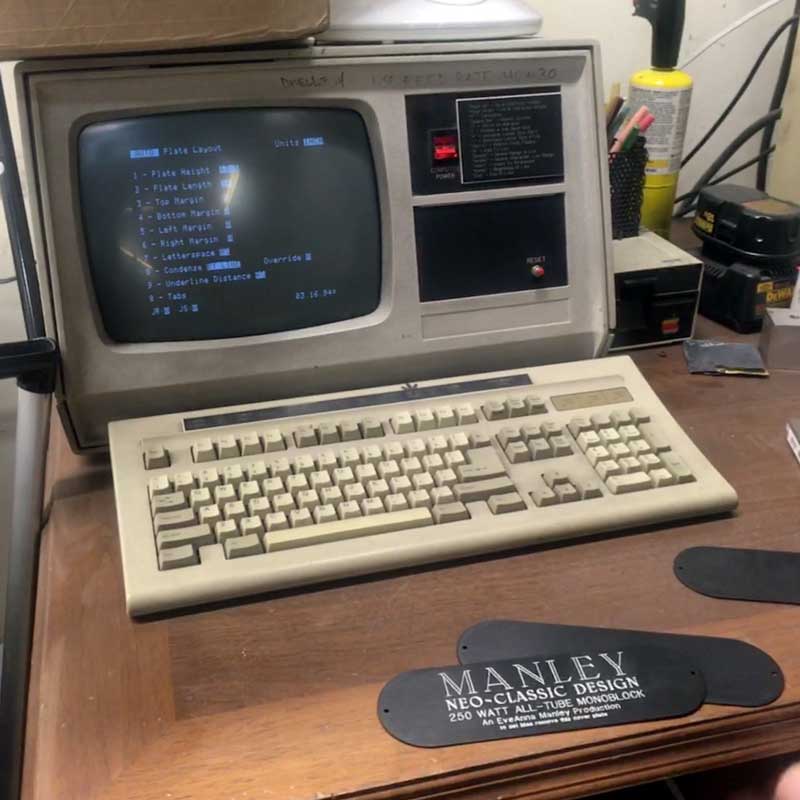 This Apple II computer, complete with 5.25″ floppy disk drive, is the brain behind Manley’s mechanical engraver — the machine that cuts into aluminum to create the various badges and faceplates you see on Manley gear. “This old thing is a tank. The motherboard was made in Singapore in 1982. I opened it up to check,” says EveAnna. 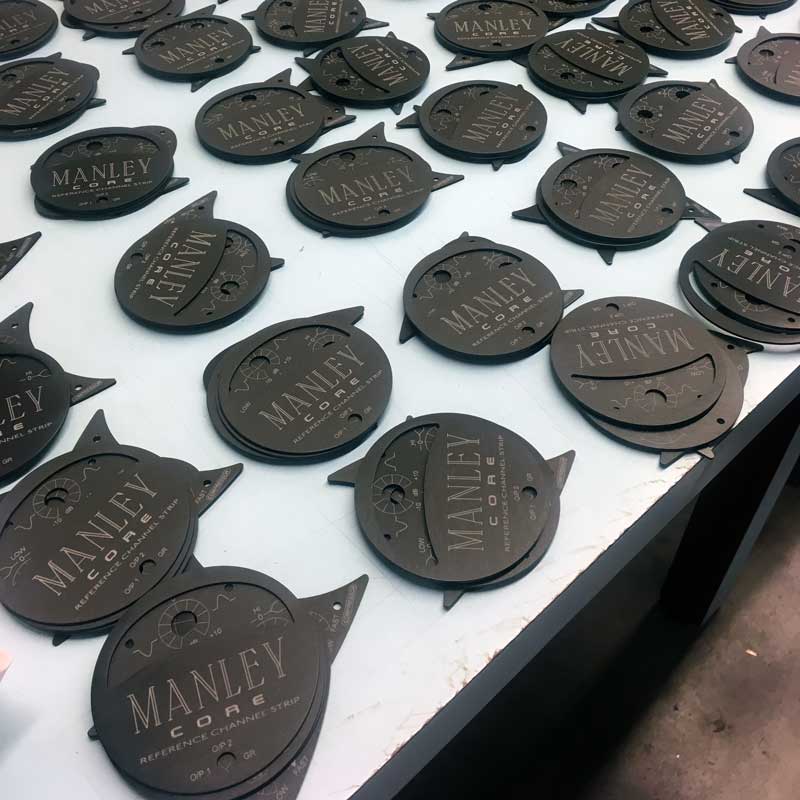 These badges, ready to be installed in the Manley Core Reference Channel Strip, were created with a laser engraver — controlled by a slightly more modern computer than the Apple II that’s still used for the mechanical engraver. 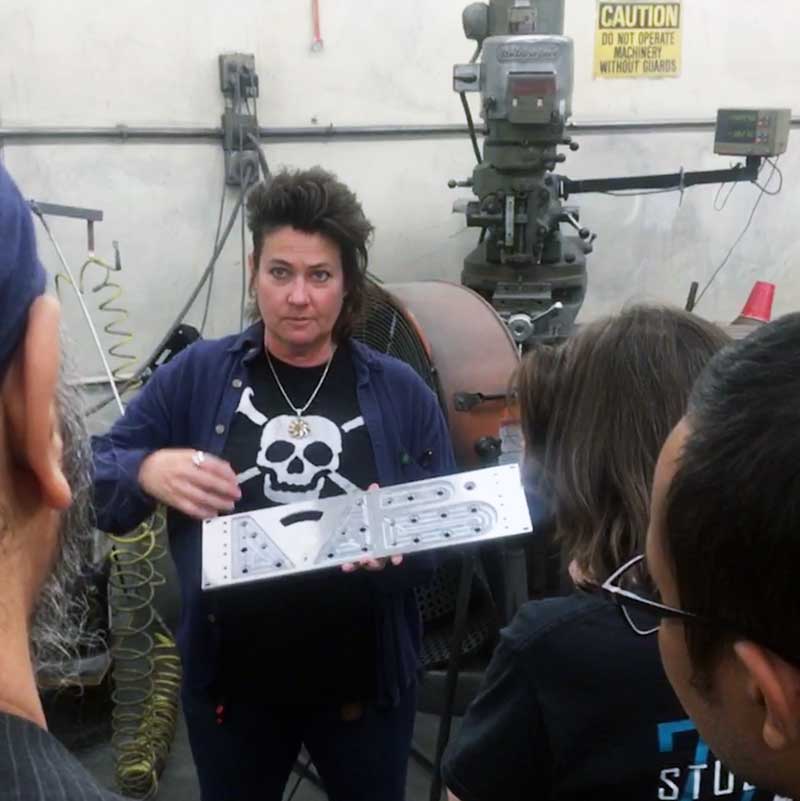 The Manley VOXBOX has been in production since 1997. But have you ever noticed how the faceplate contains a “V” and “B” shape? EveAnna explains how this faceplate isn’t only a clever visual design, it’s also ergonomic: “Your brain just memorizes these shapes so quickly, and your hand will go to the exact knob you need very quickly, in the mic pre, compressor, EQ, and limiter sections. If it were a whole grid of knobs, you’d have to go hunting for the one you need.” 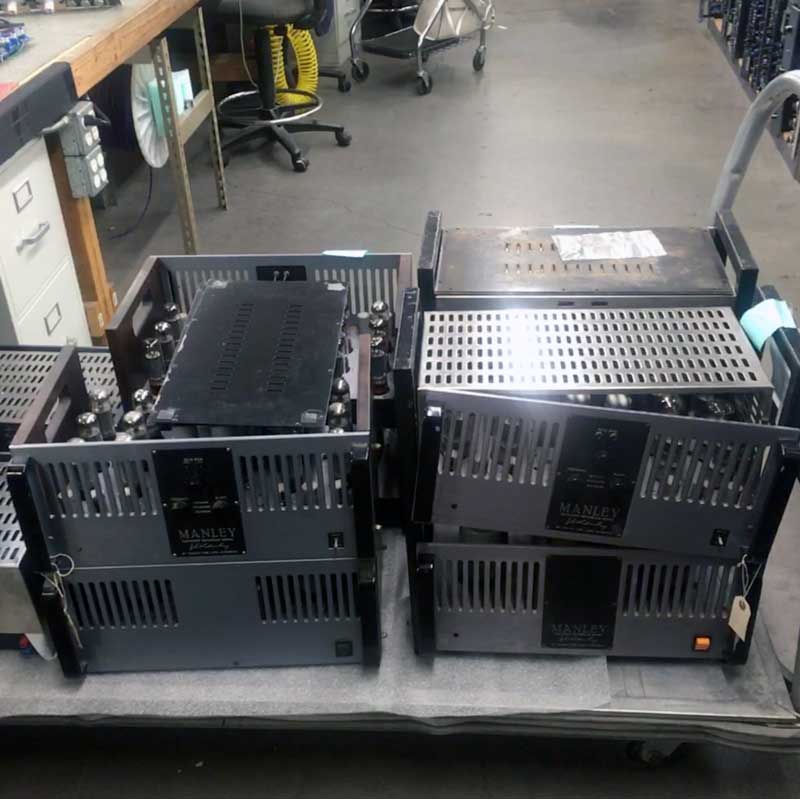 These weather-damaged power amps are from 1988 — some of the oldest Manley branded units in existence. “These came back to us from Saint Martin,” explains EveAnna. “We gave them a quote to restore them. Everything’s repairable. We can fix everything we’ve ever built, even if it’s been thrown in the ocean.” 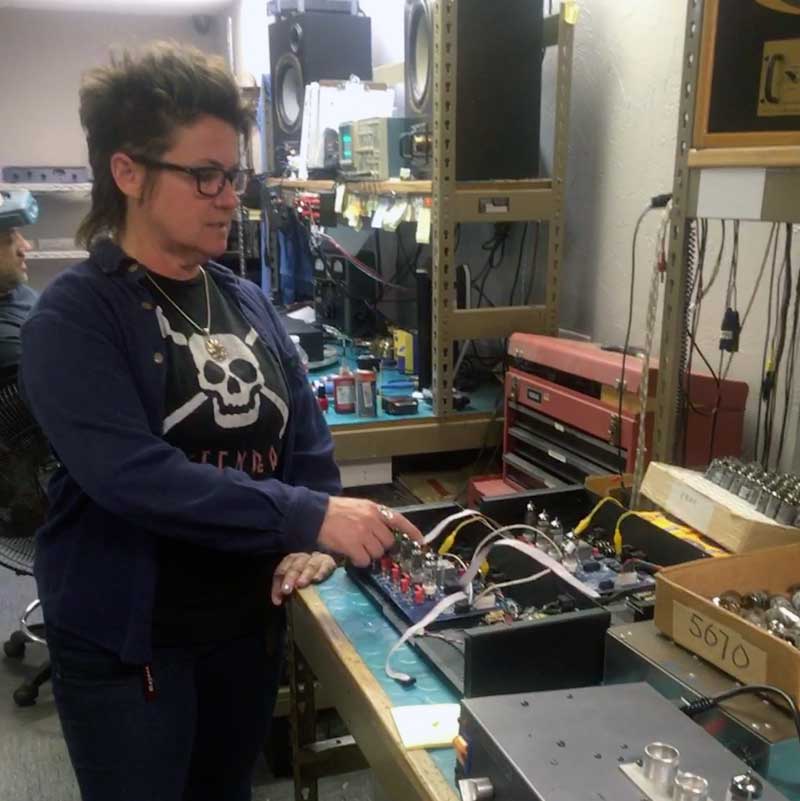 Manley Labs technicians carefully test each vacuum tube before it’s installed in a piece of gear. Since each tube can have its own character, matching two tubes to be used in one piece of gear is an art in itself. “You can select two different friends to get married,” explains EveAnna Manley. 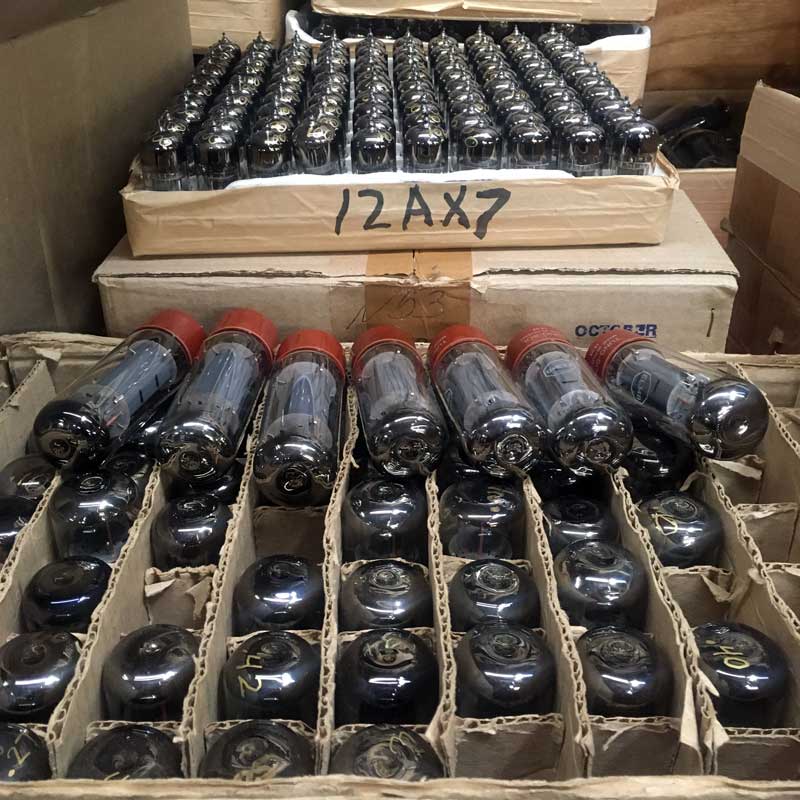 They go through many boxes of tubes at Manley Laboratories. 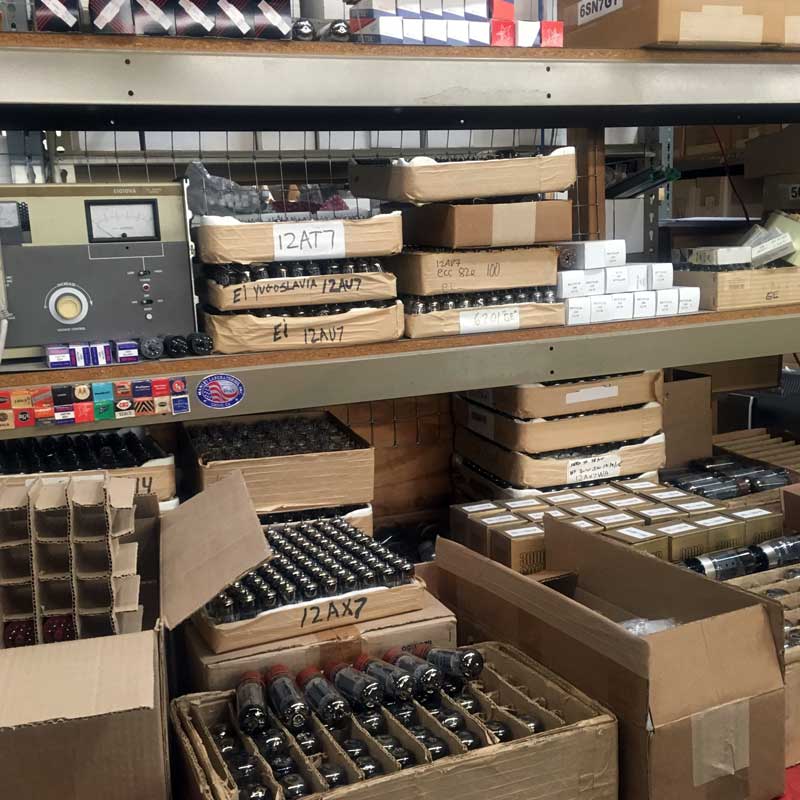 Having plenty of tubes on hand helps Manley technicians find the right set of perfectly matched tubes, every time. 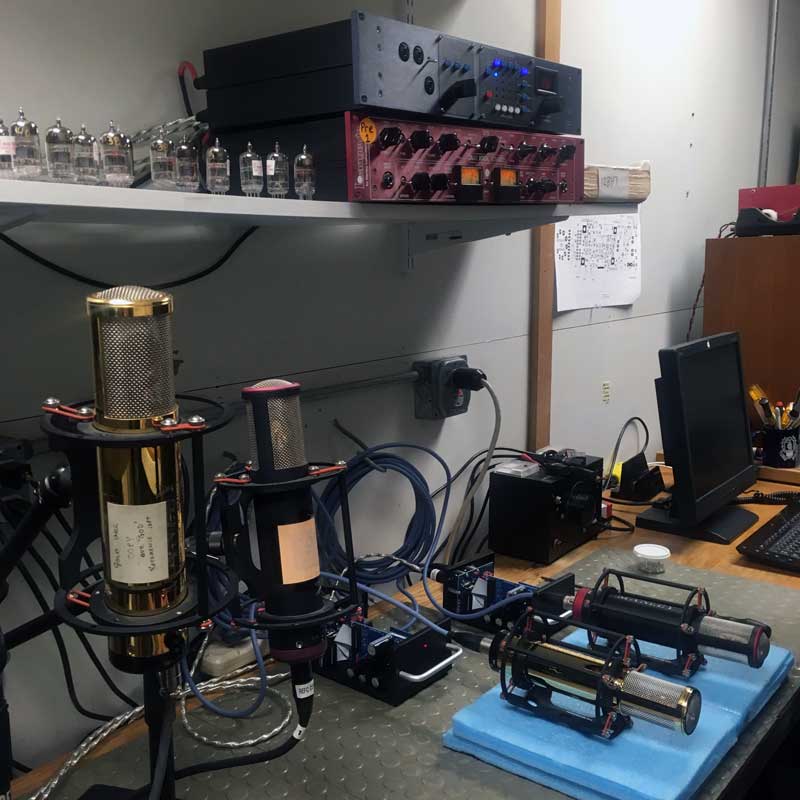 Here, a Manley Reference Cardioid and a Reference Gold mic go head to head. “The Gold mic has a purposeful 12K peak that gives it a very shimmering top..but the Ref C is the best-selling product we make. If you’ve got talent, it’ll put it right into the track for you,” says EveAnna Manley. 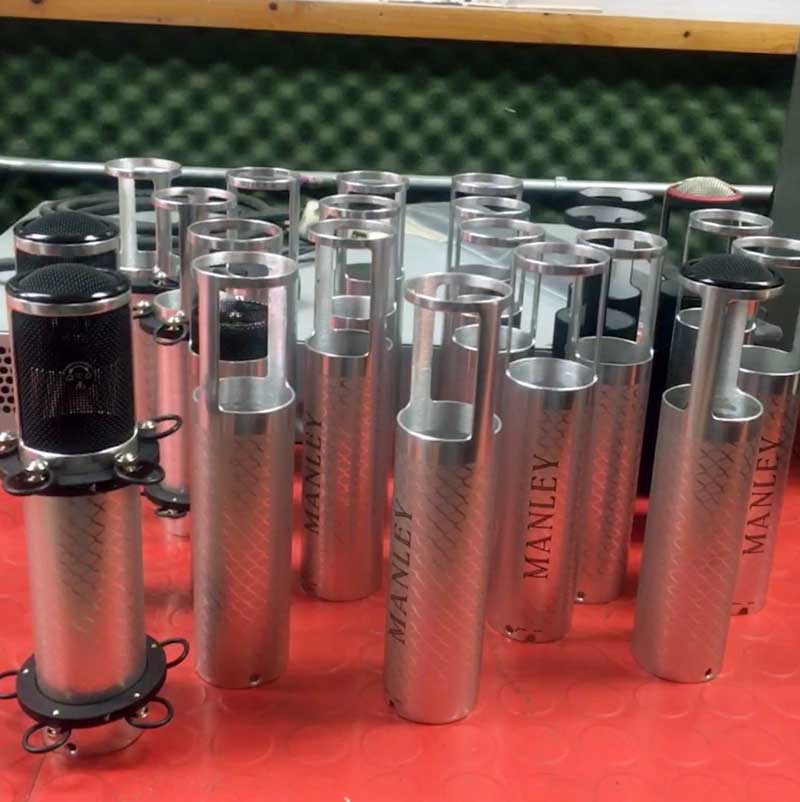 Manley’s newest microphone is the Reference Silver, released in 2016. Because each Silver microphone body is individually taped with plastic netting and then sandblasted, each mic ends up with a slightly different crisscross finish. 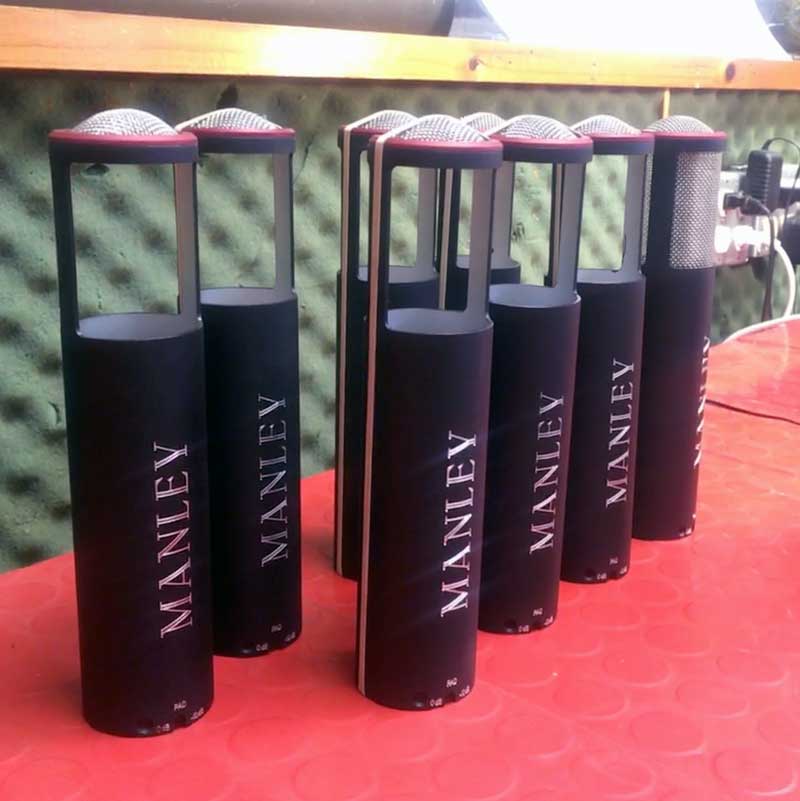 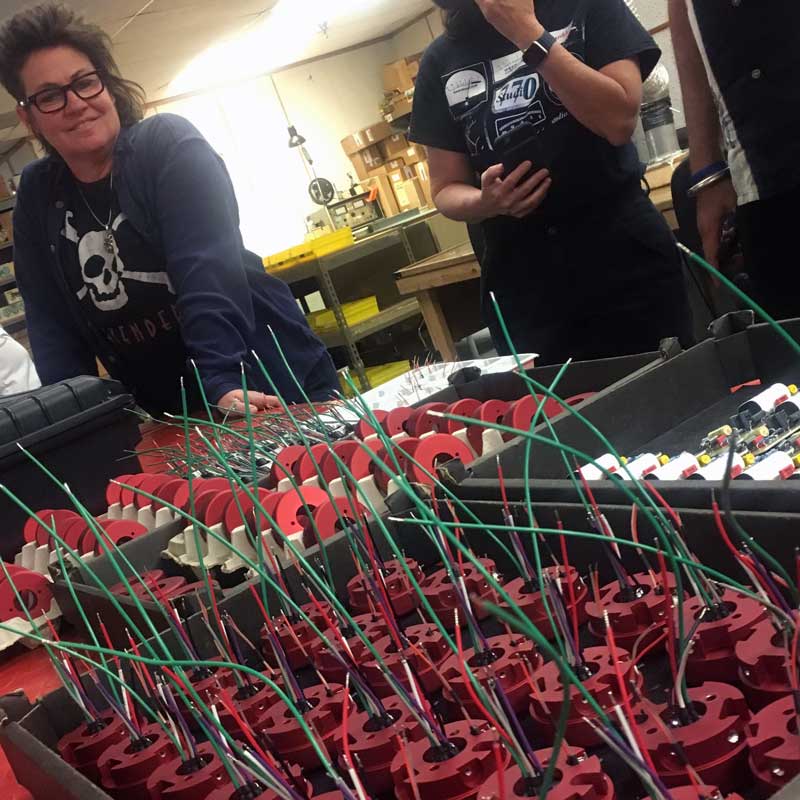 Here’s a look at some of the “guts” waiting to be installed in the Manley Reference Cardioid microphone. Famously used as the vocal mic in Dr. Luke’s pop productions since the 1990s, this mic was also the choice of voiceover legend Don LaFontaine, whose “voice of god” recording chain was a Manley Ref C into a Manley mic pre. 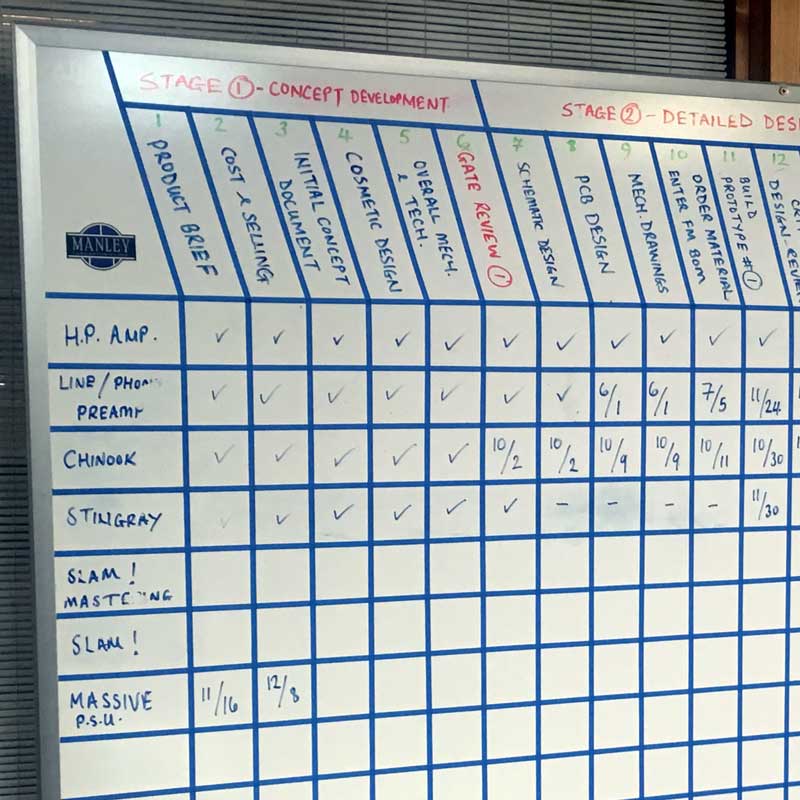 It’s not all fun and games at Manley Labs! The staff keeps track of their product development process on this whiteboard. 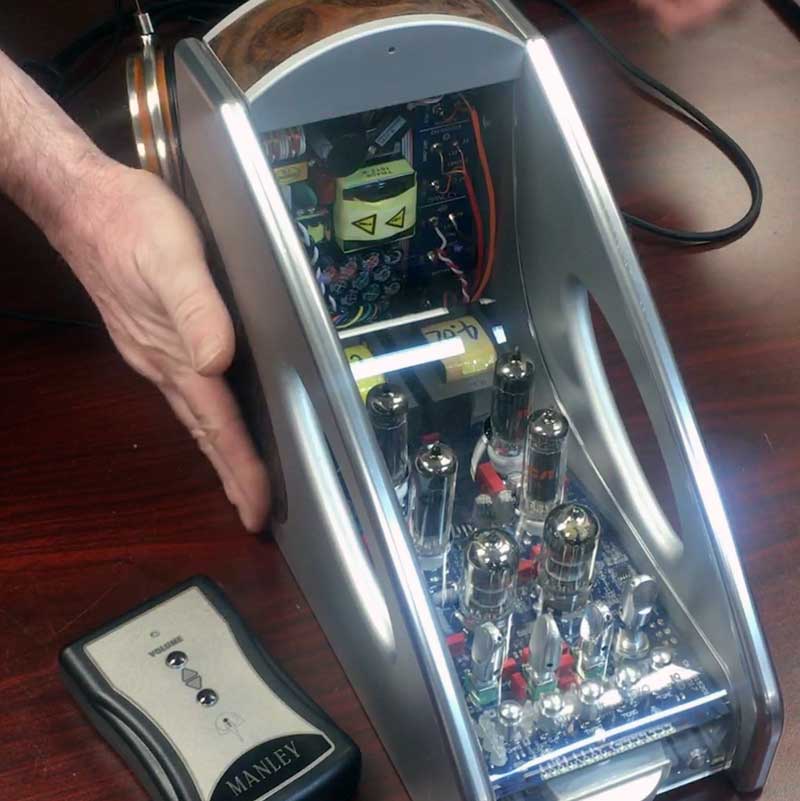 The Manley Headphone Amplifier is the latest product from from Manley’s hi-fi department, designed by Manley VP of Engineering and Design Zia Faruqi. This prototype has a clear case, but the production model will be opaque or smoked.

Layering Acoustic Guitar in a MixLegends of Tone: The Allman Brothers Band