Using a Boost Pedal with Overdrive 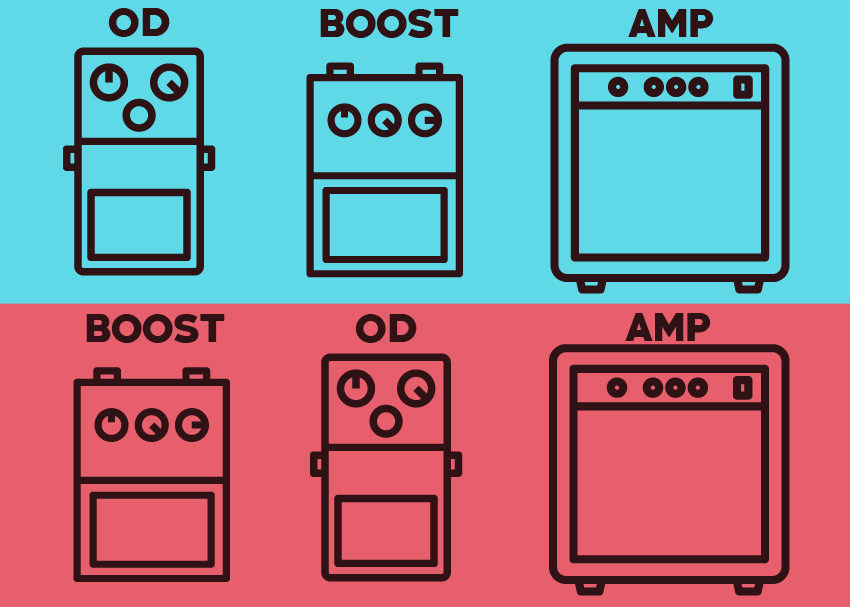 Overdrives and boosts, considered by some (me) to be a rock guitarist’s most used effects, help establish the foundation for tasty, clipped tone. While we all know and love the effect overdrive pedals create, boosts have somewhat of a mysterious air about them. Clearly, it’s easier to hear how an overdrive affects your overall tone — stomp on the footswitch and voila, your guitar’s tone instantly saturates with harmonic goodness.

But what about a boost? I mean, they seem like simple and self-explanatory effects. Depending on what piece of gear you choose to feed from the pedal, however, different effects can emerge. A popular method of using a boost is to simply plug it into a tube amp. Feeding a boost pedal into a clean amp with lots of headroom will cause a highly perceptible volume jump. Doing the same into a tube amp dialed right on the verge of breakup will also add some volume, but that’s not all.

Ultimately, a boost starts to change the amp’s tone by increasing the amount of overdrive it produces, as it’s already at the edge of its overdriven threshold. The closer you dial your amp to this threshold (and beyond into overdrive), the less a boost will raise overall volume. Boosting an already screaming tube amp will only add more saturation, with a mildly perceptible volume increase. So to put it simply, a boost not only makes things louder, it also has the ability to add even more gain to overdriven tube amps. For the sake of brevity, however, we’ll keep this post about pedals.

Plugging a boost into an overdrive pedal produces a similar reaction to a boost going directly into a tube amp. I’m sure you’ve noticed that if you’re playing into a dirty amp or an overdrive, you can roll down your guitar’s volume knob to clean up the tone. But what would happen if you were able to turn your volume up past 10? Well, you’ve just entered boost territory.

Using a boost to feed an overdrive is like being able to turn your guitar’s volume knob up to 15 or 20. While the overall volume your ears hear doesn’t necessarily go up that much, the amount of saturation can increase dramatically.

Listen to the samples to understand what I’m explaining just a little bit better. I plugged a PRS S2 Vela into a Keeley Katana boost and an EarthQuaker Devices Palisades overdrive, then directly into my Focusrite Scarlett 18i8. The sounds were brought to you by Logic Pro X’s Amp Designer plugin.

I used Logic’s Amp Designer plugin to get a solid tone to suit the EQD Palisades overdrive. In this particular signal chain, the most noticeable volume differences happen when you put the boost last.

Plugging your guitar into an overdrive first and then feeding it to a boost should result in a standard volume boost. The overdrive does its dirty work, then sends the signal to the boost. At this point, the boost will just take that signal and make it stronger. As previously mentioned, if the boost then hits a clean amp, there will be a volume jump (that is, if you turn up your boost enough to do so). This volume jump would also depend on how much clean headroom you have left before it starts to break up. Hitting a dirty amp will add gain and a modest volume increase. In my audio samples, I made sure to leave a lot of headroom on my interface’s preamp. With this setting, having a boost last mostly adds volume without adding gain.

Take a listen to the samples again and see how configuring your pedals in different orders affects their performance. Of course, this is just a general guideline and your mileage may vary. As always, experiment, make some loud noise, and above all, have fun!