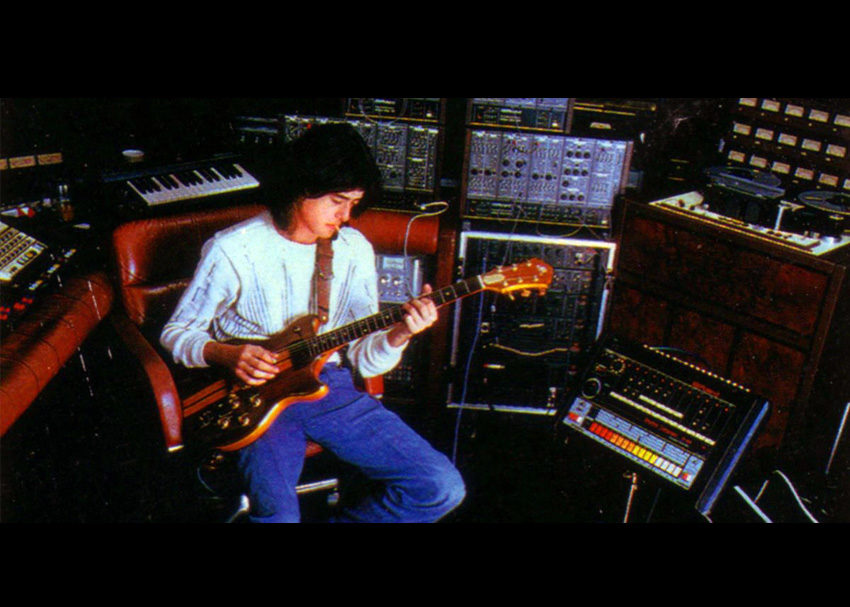 Many engineers have employed a “secret sauce” for mixing thick bass tracks that involves adding a synthesizer-doubled track to create a sonic profile with seemingly endless low end (at least to the human ear.) This is common knowledge to most recording artists and has been practiced for years on countless records and sessions in most modern genres. But less known is the practice of using a synth for doubling of guitar tracks. Typically a synth track is standalone and used either as a lead or as an ambient rhythm part in an arrangement. But in the case of the doubled guitar lead, a synthesizer track can add punch or ambiance to the track and serves to perfectly highlight a great guitar part. When propositioning a song or riff for synth doubling, it’s important to begin with a great guitar track. This will later be EQ’d to match the synthesizer track you are recording, so mixing isn’t a huge issue just yet. The next step is to select the synthesizer voicing that will fit correctly in this track. There are countless voicings to choose from, but all fit into two major categories: soft synths and hardware synths.

Soft synths include anything that must be used in a DAW on a computer like Spectrasonics Omnisphere, or in conjunction with a keyboard controller such as the Alesis V series. Hardware synths are the opposite — standalone units that have their own tone and character. These include instruments like the Korg MicroKorg or Roland System-8. After these are selected, it’s important to note what you’d like to accomplish with this doubling, either adding punch to a lead or adding ambiance in rhythm.

Adding Punch to a Lead You can manipulate soft synths with a MIDI keyboard controller.

In the case of adding punch to a guitar lead, think of the synthesizer track as a highlighter. The highlighter is pointing out the most important section of the composition, in this situation: the guitar lead. By treating the synth track similarly to a doubled guitar track, it creates a variance in the song that can even add variety to your album as a whole. This type of doubling is very straightforward in that it’s basically perfectly replicating the guitar riff to notes through the synthesizer, very similar to just doubling it with an additional guitar track. Keep in mind, this process adds “punch” or “attack” to a truly “front and center” lead guitar part. This method brings out the best in a great guitar lead and in turn it’s become very popular in modern metal genres because of its riff heavy nature.

Another function of synth doubling is to add ambiance to a rhythm track. Much like the previous method, this is pretty straightforward but needs to be done carefully as to not add mud or crowd a mix. Starting with a great guitar rhythm track, add in a polyphonic synthesizer that can double the chords fully or monophonically with just single root notes. This process sacrifices punchy attack for thick ambient tones that quickly fill out a song. This works well with choruses and large, epic parts of a song or areas of a song where the bass player is taking a lead for some reason.

This also works well with arpeggiated rhythm tracks. Very similar to how harmonies are performed, use the synthesizer to play notes a third up or down from the base riff to create deep harmonies that can set the stage for a great rhythm track.

Technical metal band Singularity use synth doubling techniques in this live version of their track “The Royal Order:”

Now that the stage has been set and the technique has been learned, the next step is using discretion in choosing the space in song or individual riff for synth doubling. It’s easy to go overboard — much like it is with vocal doubling — and try to shoehorn it in at every space available in the composition. A professional producer will take these skills and use them to amazing effect. Approach your next mix with accuracy and keep in mind the available sonic space, then craft a unique and professional-sounding mix with the help of synth doubling.