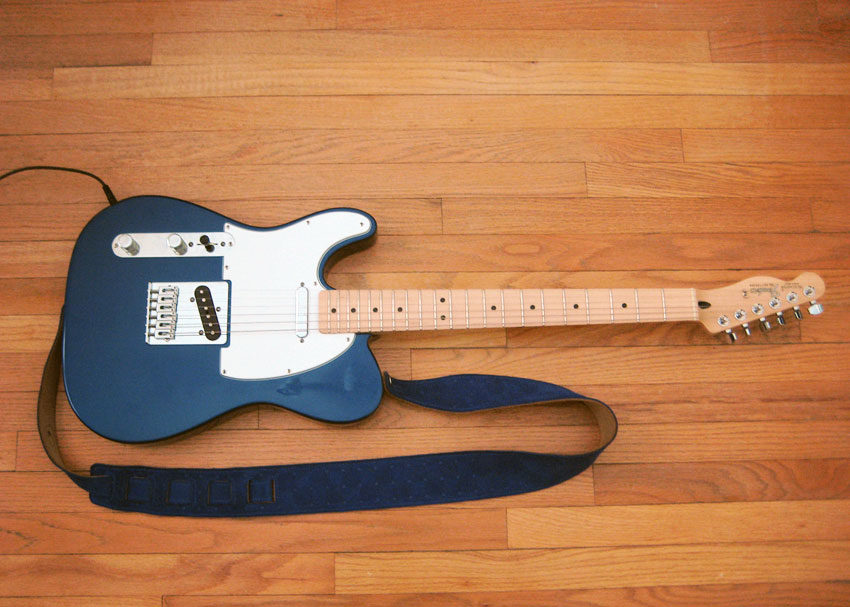 When I was 12 I decided that playing guitar was rad, and I wanted to do it. My parents weren’t too excited to get me something I could make endless amounts of noise with, but eventually they caved and my dad drove me down to the local music store. I grabbed a guitar off the wall and sat down with it, upside down. I was kind of confused why all the knobs and things were in my way but I didn’t know anything about guitars at the time so I thought that was just normal. After a few minutes the shop owner walked by, gave me a look and asked if I was left-handed. When I nodded “yes” he took the guitar from me, flipped it around and gave it back to me saying “here, this is gonna be a lot easier for you in the long run.” At first I was kind of annoyed, but looking back now, I thank god for that man. The Hand of Doom was a left hand after all.

A lot of lefties didn’t get so lucky and learned how to play guitar the way that felt natural to them, leaving them with fewer options when buying a new instrument. Left-handed models are limited, and often more expensive then their right-handed counterparts. Why don’t more left-handed guitars exist? It seems like only a few changes would have to be made to accommodate southpaws, but in modern guitar production, unfortunately that just isn’t the case. There are a few different reasons left-handed guitars aren’t as common, and they come down to basic economic principles.

Those same economic principles spelled the end for The Leftorium. (via GIPHY) This can really vary depending on how big a manufacturer is. For someone who is hand-making guitars, producing left-handed models is easier, though not without its own pitfalls. Some of the process has to be re-learned, and while factory machines don’t have to be reset, some tools and jigs do need to be reworked. The few parts that do need to be bought, like the bridge, cost more when the manufacturer is doing a much smaller buy of those parts.

Larger companies can produce guitars in the price range they do because of volume. Just ask your economics teacher to go over the economies of scale again. In order to make a run of lefty guitars, they have to halt production, switch over all the large and complicated factory machines, and then when they’re done, switch it all back again. When it comes to acoustics, the bracing patterns have to be flipped. At a smaller company, the body blanks are hand-cut, but in this case, a machine has to be reprogrammed to do so, taking more time and money.

There are also a lot of little things that most people don’t even think about. For example, unless you purchase left-handed pots, you will have to roll the knob in the opposite direction to turn the volume up. A small factor, but definitely an important one that can easily throw you off in the middle of a song. And the difficulties in producing left-handed models are not only felt with electric guitars and basses, but in the with acoustic guitars as well. As mentioned before, the bracing patterns have to be flipped, the nut and bridge are different, cutaway models have to be flip-flopped and even the side dots on the neck are changed up.

When companies do decide to produce left-handed models, they’re usually based on the most popular, standard right-hand models. That reason is because of the second major factor in producing a left-handed guitar:

There Are Fewer Customers

Just 10 to 15% of the world’s population is left-handed. Which means that in the big picture there just aren’t that many left-handed players out there, and with a much smaller customer base, there is an all-around lack of demand for left-handed guitars. If you factor in all the above production issues and then add in the small customer base after all that, guitar manufacturers end up spending a lot more time and money to produce a product they simply can’t sell as much of — and in turn, make as much profit from. The idea of re-tooling and reworking everything, just to make what amounts to a small limited run of guitars with a small market interested in buying, makes it obvious why so few lefties exist. Do you think they still make that Budweiser suit?

That means that save for a few boutique and hand-crafted guitar makers, most major brands end up limiting their left-handed production to their most popular series of acoustic and electric guitars.

On the Bright Side…

If you’re a lefty reading this, you may feel discouraged and disillusioned in this righty-dominated world. But cheer up, because there is a silver lining to being a left-handed guitarist: you might just be naturally better at it. The American Journal of Psychology published a study that found left-handed people are more inclined toward being better artists, showing that they’re more adept at divergent thinking, a method of idea generation that explores many possible solutions. Which makes sense if you think abut it. Some of the best players are left-handed, from Tiny Tim and Nick Feldman of Wang Chung to Paul McCartney and Jimi Hendrix. And many of these left-handed stars make their signature models available for both lefties and righties!

So now you know, it’s not guitar manufactures that don’t care about southpaw axe slingers, it’s the capitalist system of economics. The only person we know of at least that has been able to beat the system is the divine being Michael Angelo Batio.