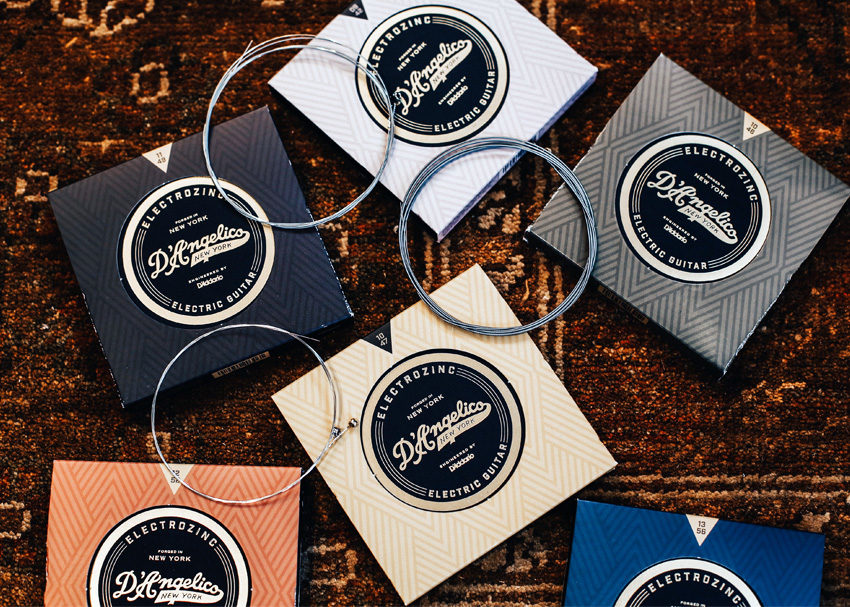 D’Angelico Electrozinc strings are technically a new product, having been released in 2016, but the truth is, their origins go back much farther. A collaboration between famed John D’Angelico and string innovator John D’Addario, Electrozinc strings were first produced in the late 1930s using “Bethanized” steel from the Bethlehem (PA) Steel Corporation. Though production stopped in the 1960s, the Johns’ two companies have partnered once again to recreate that classic formula as closely as possible.

So, how are these strings? We were lucky enough to get a variety of samples here at zZounds HQ and were happy to put them through their paces, using a multitude of gauges on our own guitars. So check out this Roundtable Review to find out what we thought!

Being a player that favors heavier gauge strings and tuning down, I volunteered to test out the thicker range of the Electrozinc strings, grabbing a pack of 12-52 and 13-56. I started off by stringing up the 13s on a Peavey T-60 that I have set up for tuning around B baritone tuning.

To start off, I have to say these strings come in some of the nicest packaging I’ve seen in a string set. The jacketed string pack follows along with the style and sophistication that D’Angelico is known for and opening this string pack was more akin to getting a Blue Apron meal or a hip clothing/outfit subscription services.

Within the packaging, the strings are in a vacuum sealed plastic pouch and circled around as all strings are. The only thing I would ask for is a way to more easily identify which string is which, such as colored ball ends, etc., but that’s only a minor issue. 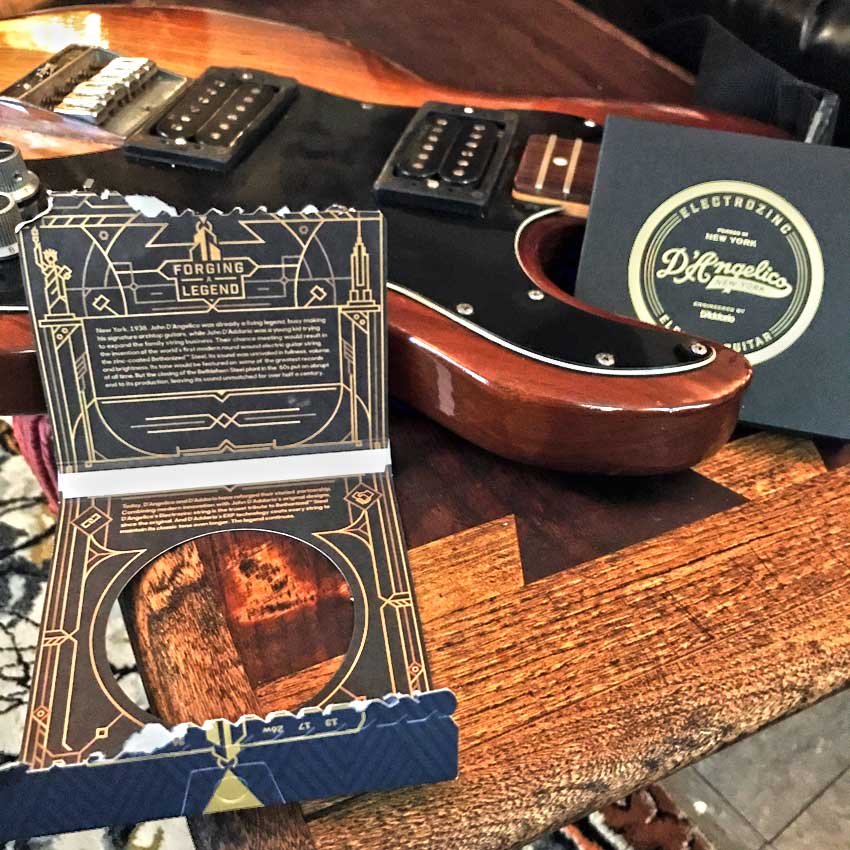 After stringing up my guitar with Electrozincs, the first thing I noticed is that the coating on these strings was smooth and comfortable, letting you move around the neck easier, Unlike other coated strings, they didn’t have a super slick sheen on them, that for me can just be too much, especially on electric guitar.

Once I tuned up and stretched out the strings some, the first thing I noticed after I plugging in and playing is that unlike other strings, these sounded much more smooth and rounded out than the majority of fresh strings I play. Often times, a new set of strings will sound snappy and clanky with a bright attack for the first few days, and will only mellow out after a few days of playing. The Electrozincs were good right out of the box. Tone-wise these strings indeed fit into the more “vintage” ’50’s and ’60s sound and vibe that D’Angelico subscribes them to and I can see how these strings will work well with classic and roots rock. Personally though, I found them also great for playing heavy doom and sludge metal, where you don’t want things super bright and shimmering.

In all honesty, my hands don’t seem to corrode strings as quickly as other people I know (I guess I have very dry hands?) but even after a few weeks’ time, the Electrozincs feel fresh and new, with no real notable drop in sustain or tone. They’re definitely a set of strings I will reach for again.

D’Angelico created the Electrozinc electric guitar strings in the shadow of “Bethanized Steel” strings. With an undeniably vintage character, the tone of these strings jumped right off the guitar for me while playing a slightly dirty rhythm arrangement. After playing the D’Angelico Electrozinc strings, I can see them being pivotal in a rock, blues or a country guitarist’s repertoire and any mix of the three genres. 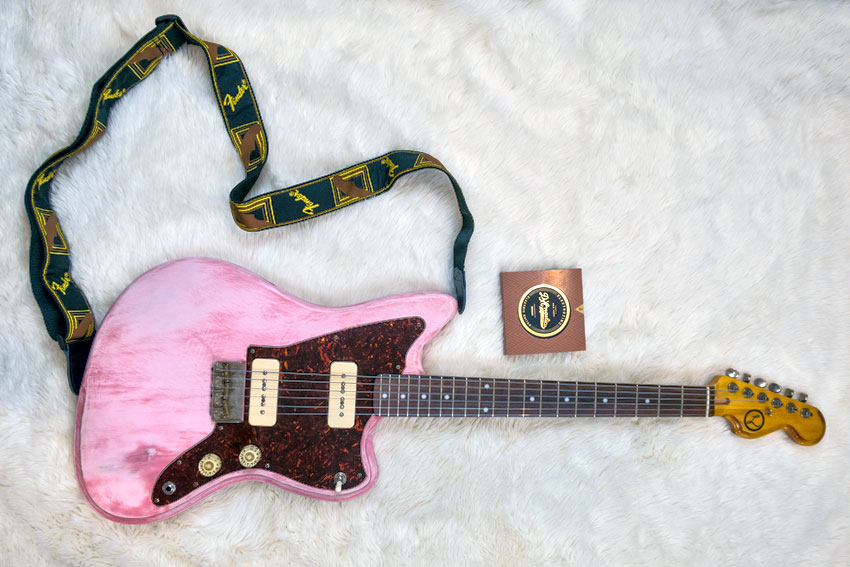 I took a slightly different approach and used these on an offset; my LaRose Classic Jazz, modeled after the Fender Jazzmaster. I really couldn’t explain in detail what I heard because it was so unique to these strings, but the tone sounded definitively refined, and even similar to putting a record on and hearing the guitar tones of the 1950s and ’60s. I really enjoyed the tone that a Electro-Harmonix Big Muff provided with the help of these strings. Immediately I began riffing some Black Sabbath and other ’70s metal-inspired fuzzed-out leads and booming rhythm, really showcasing the dynamic tones I could get out of this one set of Electrozinc strings.

From their Art Deco packaging to their Bethanized steel core, to the fact that they’re based on an early collaboration between Johns D’Angelico and D’Addario, Electrozinc promised one thing from the get go: big, bold, uncompromising tone.

I wound up my Strat with a set of Electrozinc strings in the 10-46 gauge, eager to see how they felt and sounded. As soon as I opened the packaging, I knew these were different from the strings I typically use. The coating is there, but it’s extremely subtle. I don’t use coated strings and I couldn’t really tell much of a difference. After winding them up, clipping the ends and tuning, I played around on them a bit. I typically like to dial in a bright, chimey tone on my Strat and right off the bat, I realized that getting that sound with these strings would require some EQ adjustments from my usual settings.

Rather than doing that right away, I decided to play these strings with a tone they were more naturally inclined for. Like others have already said, I found that with the Electrozincs, my guitar took especially well to a Muff-style fuzz. When playing clean, I got a thick, rounded tone that worked well with my single-coil pickups, albeit in a way I wasn’t used to.

Another thing I noticed after playing for a while was how well the Electrozincs held tune. Oftentimes when playing right after you’ve re-strung your guitar, any bends or even strumming too hard will whack the string out of tune. I found Electrozinc strings were far more resistant to that, and their tuning stability has held up in the weeks since I first put them on.

Overall, I’d recommend Electrozinc strings as a premium option to anyone who prefers dark, huskier tones and appreciates a smooth feel and tuning stability.

Upon receiving a pack of these strings for review, I was immediately impressed with the packaging. Of course this has nothing to do with tone or feel, but I do like to think that if D’Angelico put this much effort into the packaging, then the strings themselves must be something special. I decided to put these on my much-loved and battle-tested ’96 Fender Standard Strat since I’m very familiar with its sound.

After installing the strings and giving them a decent stretch, I was finally prepared to give them a test drive. At first feel, I definitely noticed a difference from the usual strings I play, either D’Addario XLs or Ernie Ball Slinkys. The Electrozincs had an almost galvanized feel to them, as well as more of a gunmetal blue appearance, which I suspect might have something to do with the zinc coating. This feel gave me a much better grip on the string for bends, while still remaining slick enough to have a smooth feel when changing chords.

Plugging in, the strings had a pretty meaty tone to them. Playing overdriven power chords, the strings produced a distinct bite that sounded great to my ears. Open chords on a slightly overdriven setting produced a nice warmth on the low end with a tastefully restrained high end that would tame even the brightest of amps or guitars. Lead licks also sounded beefy, even on the first few strings. I also really like the tension — they felt great on my Strat. Just enough give without feeling too flexible. Overall, I’d definitely recommend these to players looking for strings with a complex midrange without an overly bright top end. Give them a shot, they might end up being your favorite string!