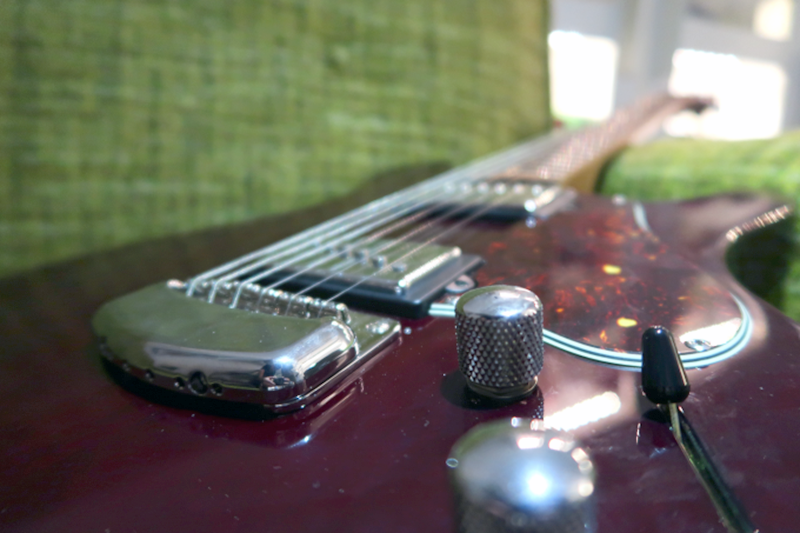 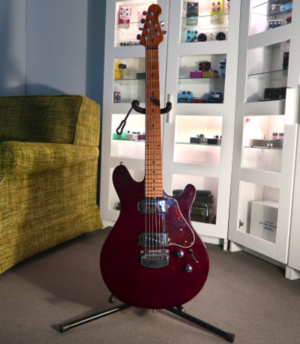 The James Valentine Signature is strangely stunning. “Strange” because of its pure simplicity of design. A wedge-shaped ash slab body, with an oil-and-wax rubbed and roasted maple neck are the first features I took in as I grabbed this guitar off the rack. The “Transparent Maroon” finish allows just a touch of grain to bleed through; it looks great and is subtle. After holding the guitar for a moment, the oversized “4-over-2” headstock caught my eye, and feels really good in the hand and the addition of locking Schaller tuners hints at the “pro” aspect of this instrument.

Ernie Ball Music Man is in the business of making “pro level” guitars and this is certainly up to par. From the Ernie Ball “Vintage/modern” hardtail bridge, to the volume and tone controls (both with push-push) and a 3-way pickup switch, the Valentine can easily work as studio shredder and solid workhorse for almost any type of guitarist.

Obviously my first impression of the oil-and-wax rubbed, roasted maple neck was spectacular. A fast, almost “shredder” quality to it makes even the most demanding arrangements play out with a subtle ease I’m used to getting on high-end guitars; no surprises here.

The Valentine body is bigger than most guitars I’m used to, but has a smart form factor and contours that really don’t compromise the “feel” between being comfortable and reaping the tonal rewards of keeping its ash slab body intact.

This guitar feels like I’m playing a Les Paul with a thinner neck. With a 10″ neck radius it feels a lot like my native Telecasters do, or a 1970s Epiphone Riviera (with the bolt-on neck.) 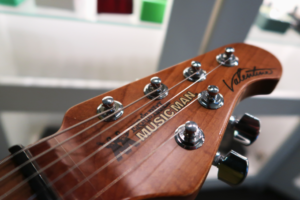 Oversized 4×2 headstock on the Valentine Signature

Though this guitar is visually appealing, it really shines under the hood. James Valentine mentions with this guitar he wanted to combine the tones of a Gibson ES-335 and a Fender Telecaster, basically one he could play through all the genre shifts and tonal changes of a Maroon 5 set.

When plugging this guitar into a Fender ’68 Custom Vibrolux Reverb and getting just a touch of overdrive, I’m hearing the Gibson ES-335 style tone right away. Deep driving chords and focused leads, thick tones akin to most Gibson guitars. When I push in the tone knob, it splits the coils of the Music Man custom pickup (which has staggered pole pieces) and a familiar tele-twang erupts from the Vibrolux full of screeching highs and punchy mids. This all coupled with Ernie Ball Music Man Silent Circuits, designed as a “dummy coil” to eliminate “buzz” and “hum” from the pickups.

After noodling around on a relatively clean tone, I push in the volume knob to unleash a 20 dB boost creating a crunchy breakup in the Vibrolux. Pairing these pickups with the slab ash body adds some great sustain and some brightness with the roasted maple neck.

This guitar is definitely receiving a nomination for being a player’s “forever guitar.” Being as versatile as it is, coupled with the vintage looks and outstanding feel, the Valentine signature can be a good option in both the studio with its tone options and out on the road with its high build quality and ease of use. Without a doubt this instrument is a “pro-player” level guitar, but has the options and feel to be a great asset in the hobbyist or collector’s repertoire.