Moog’s Minimoog Model D — back in production for the first time since 1981 — has been making waves among analog synthesizer fans. Among those fans are Greg Spero, touring keyboardist for Halsey, and AWOLNATION’s Kenny Carkeet. Both musicians took a brand-new Model D for a spin at the zZounds HQ.

In addition to his work as Halsey’s keyboardist and sound designer, Spero leads Polyrhthmic, a progressive jazz ensemble. He’s an official Yamaha artist who primarily plays Yamaha keyboards, “but when it comes to analog synthesizers, I tend to prefer Moog,” he explains.

And although Carkeet plays a Nord board on stage with AWOLNATION, he’s no stranger to Moog synths: “I have a Moog Voyager at home, so I know their sections really well,” he says. “If you know Moogs well enough, you can hear a sound in a record and almost know that it’s a Moog. They have a very distinct sound…which is classic.”

zZounds: Greg, what’s in your keyboard rig these days?

Greg Spero: For digital synthesizers, I prefer, hands-down, the Yamaha Montage 8. That’s what I use for just about all of the sounds. It has everything that I could possibly want to use on the gig, including a fantastic piano sound — a modeling of the Yamaha CFX.

zZounds: What is it about a analog synthesizer that gives it “that sound?”

Greg Spero: From a digital instrument, you’re creating a sound wave in steps, because digital equals “one” versus “zero” — it’s on or off — whereas in an analog synthesizer, it’s a continuous wave. It’s a very subtle difference, but sometimes you want to use an analog synthesizer like the Model D to create a wave that you can only get from true analog circuitry.

zZounds: Artists often refer to a Moog synth as a “living, breathing” instrument. What does that mean?

Greg Spero: The Model D in particular is a very “living and breathing” instrument, with the controls right in front of you. And it’s not too crazy of an interface with the controls; it’s accessible. You can explore. It makes you explore! You have to — you can’t save presets, which is pretty cool. So it turns it into this musical extension of yourself. It’s a unique experience for creating, using that interface.

For the sound design that I do, I use a bunch of different interfaces, including a lot of software synthesizers like the Native Instruments stuff, and the interface within the Montage 8, which is a very robust interface for customizing your sounds.

The Minimoog is a unique sound design experience, because you have 3 oscillators and a filter which are intertwining in a unique way. It’s something that you can’t really replicate outside of the specific nature of what the Model D is. The first time trying it, I had a lot of fun with it! 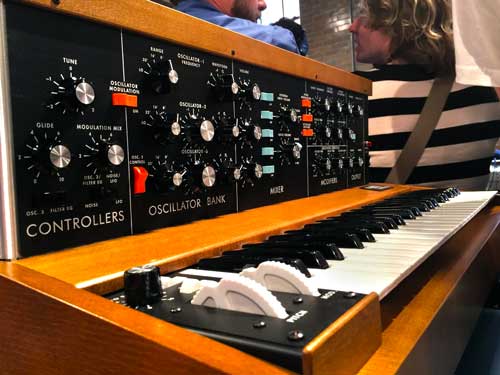 The Minimoog Model D, making its big comeback at Moogfest 2016.

zZounds: It seems like everyone makes a software-instrument version of a Minimoog. But if you could model an analog synthesizer perfectly, then nobody would ever buy a real Minimoog, right?

Greg Spero: In the digital world, and the world of synthesizers, Yamaha leads the race. But at the same time, when you want to go retrospective and you want to get that sound that they couldn’t get enough of in the ’70s, especially, and then the ’80s, you have to go analog…You can’t replicate an analog signal with a digital instrument. You can get really close, but it’s not going to be the same. And the Moog is a classic sound that I love. My mentor — and probably favorite pianist in the world — Herbie Hancock used Moog synthesizers immensely when he was in his heyday, in the ’70s and ’80s, creating some of the music that is still some of the most-loved in the history of creative music.

zZounds: What were your first impressions when you started to play the Model D?

Greg Spero: My first impression when I played the Minimoog Model D was that this sound is beautiful. It’s just a very rich tone. I started with just this single wave — I think I used the saw wave to start, and then added a second oscillator and it fattened the tone even more. Then I switched on the third oscillator, eventually, and made it a lower octave. The sound can be anything from a beautiful, rich, soaring single tone, to this giant, fat, epic, godlike synthesizer sound. That was my first impression of it — noticing the breadth of sounds that you can actually create.

zZounds: Kenny, what were your first impressions of the Minimoog Model D?

Kenny Carkeet: With the Minimoog, the first thing is the way it looks. It looks incredible! It looks super retro: the old wood paneling, the riveted modulation and pitch knobs — even the colors, down to the blues and the reds that they chose, and that font on it — it’s very, very cool-looking. So that already attracts me to it. 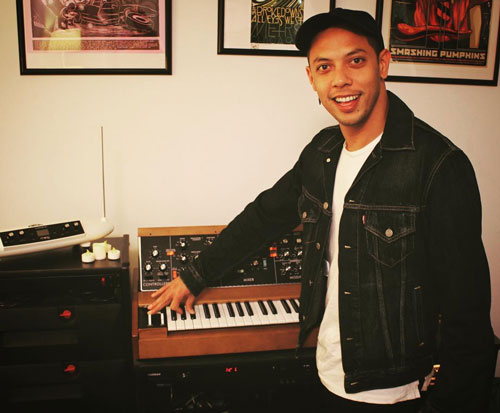 Kenny Carkeet stopped by the zZounds studio to meet the Model D.

I recently got into finding synths that don’t have presets or patches on them — nothing that’s pre-made, something that you have to make on your own, with one or two oscillators, and in the case of the Minimoog Model D, three oscillators. So that was really cool to me, to just see how much you can take one sound in every direction. I can make a disgusting low-end saw bass; I can make a high synth lead that tails off into the distance. And then it’s got cool features, like the noise volume. You can throw white or pink noise into one of the oscillators, which is really cool. Or you can turn the oscillator off, and turn the noise on, and then it’s just the wind. I love this thing.

Using my Moog Voyager at home, I got good at using the Glide feature that they have, and that’s my new favorite thing to do. I love gliding synths. So that’s the first thing I did: turn on the Glide and start cruising.

You know what’s cool about instruments like the Minimoog? You really have to play the parts right, because it’s a breathable instrument. It moves, it comes in, it comes out, it goes up, it goes down — everything’s breathing about all the Moog instruments. They’re not harder to play — they just make you play better…you’re really twisting and turning while you’re playing, so much more so than on my Nord. On the Nord it’s, “I made these great patches, and now I’m going to play,” but when you get on the Minimoog, you just want to ease into a sound, or filter out of a sound, or cut off something.

zZounds: What’d you think about the sub octaves on the Model D?

Kenny Carkeet: The sub octaves on the Minimoog are lethal. They’re pretty gnarly. I turned off everything except the low subs, and we got a noise complaint. It’s pretty awesome. It rumbles really, really hard. And then you can throw one of the oscillators up into a different octave and get this weird low subby with this high, classic Moog sound on top of it.

zZounds: Greg, you have a Little Phatty as part of your Halsey stage rig. In what context would you use a Minimoog Model D on a gig?

Greg Spero: My first choice in the real world would be to do a ripping solo, just using one of the high waves that it can create! It’s a lot of fun to wail. Especially because of the nature of a monophonic synth — it makes it really fun to be that epic “guitar player” with a keyboard.

Second to that, if I really wanted to fill out a bass sound — which is how I currently use the Moog Little Phatty — I would use the Model D when I needed a really huge bass, in the specific context of large concerts with big subwoofers and big sound systems. The low end on it is really kickin.’

zZounds: What was the delay effect you used in the video?

Greg Spero: When I’m using a digital synthesizer like the Montage 8, all the effects are built in — there’s a huge breadth of different ways you can morph a sound, just within the synthesizer. But when you have an analog synth, you don’t have that.

So with the Model D, I chose to use an Earthquaker Devices Avalanche Run. It’s a really cool delay pedal — it’s got a bunch of different ways that you can filter the delay, so sometimes I would roll off the top end and have it be this washy, lower, sort of ambient sound. Then I would pull it up to the full frequency spectrum. I played with that delay that was coming back to me, playing a harmony to it — since it’s repeating the exact same thing that I played. Which can be a lot of fun, when you’re using an analog synth.

Getting back to the basics of sound creation is limiting in a way, because you don’t have all of the capabilities that a digital instrument gives you. But it’s freeing, in a way: that restriction can lead to this creative output that you wouldn’t ever otherwise find.

Check out the Minimoog Model D on zZounds