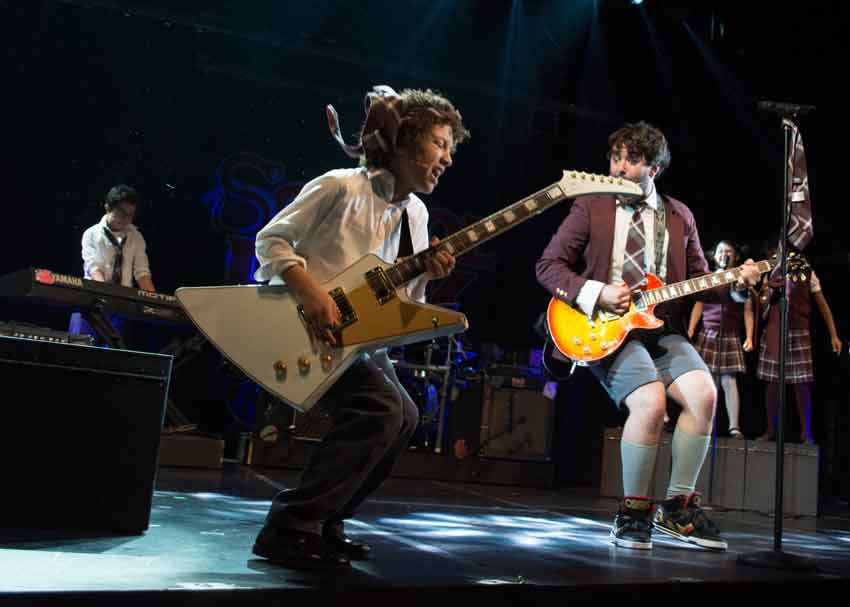 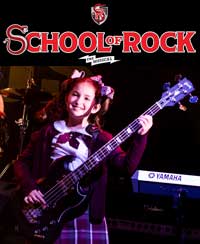 MORE: Check out our interview with School of Rock‘s bassist, Evie Dolan!

Twelve-year-old Brandon “Taz” Niederauer is a real-life guitar whiz kid who’s played with the likes of the Allman Brothers, Gary Clark Jr., and Luther Dickinson. Now, Niederauer has landed his biggest gig yet — making his Broadway debut as “Zack” in Andrew Lloyd Webber’s musical adaptation of School of Rock.

Opening in December 2015 to record-breaking box office numbers, School of Rock – The Musical is adapted from the hit 2003 movie starring Jack Black, which tells the story of down-and-out-rocker-turned-substitute-teacher Dewey Finn (Alex Brightman, in a star-making performance.) But it’s Brandon and the other kids in the cast — all of whom are playing their instruments live on stage — that have been melting hearts (and faces) at the Winter Garden Theatre.

zZounds sat down with the pint-size prodigy to talk guitars, gear, and how he got his nickname, “Taz.” 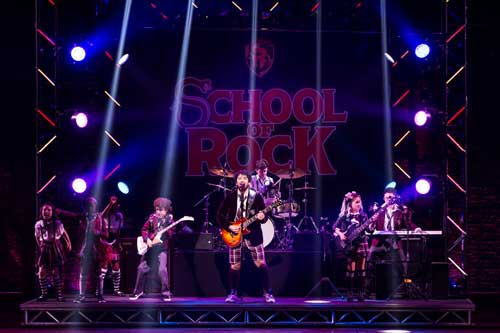 Today’s assignment: kick some ass! Alex Brightman, Brandon Niederauer, and the kids of School of Rock rock the house.

zZounds: Brandon, I understand you got into playing guitar in the first place because you’re a fan of the School of Rock movie. How did you find out about the musical adaptation?
Brandon Niederauer: I was in Vermont over Christmas vacation [in 2014], and I was playing a blues set with an amazing guitarist named Joey Leone. One of the audience members came up to me and told me about the musical. I told my dad that I would like to try it. I had to do a few gigs in January, and we kind of forgot about it until we got a call from casting. A musician friend sent a video of me playing to Tara Rubin Casting, and they called me. I was very excited!

zZ: What was the audition like?
Brandon Niederauer: The audition process was pretty intense. I was called the last few weeks of casting, so I went in and performed and sang “Dead or Alive” by Bon Jovi. They asked me back and sent some sides for me to read, a ballad to sing, and the music for a song from the play to perform. Then, the last day, there were 50 musician kids left with Andrew Lloyd Webber and the director, Laurence Connor, sitting at a table with like 10 other people. That was really intense. I had a good feeling after my turn to play that they liked me, because I stayed in the room and they kept bringing in other kids to play with me. 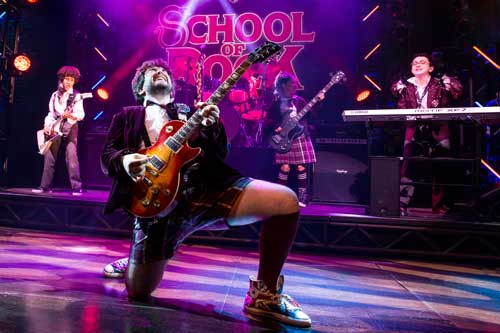 zZ: When you joined the cast of School of Rock, you already had a ton of experience playing guitar on stage, but this was your first Broadway show. Were you nervous?
Brandon Niederauer: Not nervous — I knew my playing and singing was fine. I was anxious on opening day. My main concern was the acting part. Alan Green, the actor who plays my dad in the show, really helped me to learn to be true, and stay in character. There was also an eight-week workshop in the spring that helped me before we started rehearsals at the Winter Garden.

zZ: So you’re a guitarist first, and an actor second. How do you like acting?
Brandon Niederauer: I love acting. I did a movie called Here Comes Rusty last summer with Colonel Bruce Hampton and Fred Willard — it should be released this year. I realized then how great [acting] is, but there is nothing like a live audience. Live theater is amazing.

“There is nothing like a live audience. Live theater is amazing…I’m learning that even if I’m not 100%, I have to reach inside and find a way to be my best…The 1,500 people there every night make it a lot easier.”

zZ: What’s new and different about being part of a Broadway musical?
Brandon Niederauer: Well, this is more like a steady job with responsibilities. Until now, I’ve been playing gigs around school and on the summer festival scene. Now, I have to be there every day at a specific time. The 1,500 people there every night make it a lot easier. I’m learning that even if I’m not 100%, I have to find a way to reach inside and find a way to be my best.

Beginner guitarist? Check out zZounds’ Guitar Beginner’s Guide
zZ: What’s the most difficult part of the show? Anything that took a lot of work in rehearsal to nail?
Brandon Niederauer: Technical rehearsals are slow and tiring — I’m glad they’re over. I think “Stick it to the Man” is the most demanding scene — there is a lot of stage movement and choreography. We still have crashes during performances. If we are not exact, we become a pinball machine.

zZ: What’s your favorite musical number in School of Rock?
Brandon Niederauer: I love them all, but “Teacher’s Pet” — because I can solo and directly connect with the audience.

zZ: Let’s talk gear. I’ve seen you playing Gibson guitars, D’Angelico guitars, and a Fender Telecaster in the Robert Randolph Band’s Jam Cruise video. What’s your main axe?
Brandon Niederauer: My main guitar is a 2011 Gibson Les Paul Studio. I had an amazing tech on Long Island named Bobby Popper put in vintage ’59 pickups, and he rewired and re-potted the whole guitar. It sounds amazing, and fits me perfect. I am playing D’Angelico guitars a lot now when I need an archtop semi-hollow — I am now trying their jazz box, as I’m starting to get into George Benson and other jazz guitarists. Jazz is helping me think differently as a player.

“After I saw the movie School of Rock, I told my dad I wanted to take lessons…but he had to find me a teacher like Dewey from the movie.”

zZ: What was your first guitar?
Brandon Niederauer: It was a First Act with the speaker in it from Toys “R” Us. I got it for Christmas when I was seven, but I quit playing after a month, because the teacher was boring. Then, after I saw the movie School of Rock, I told my dad I wanted to take lessons again, but he had to find me a teacher like Dewey from the movie. At that point, right before my ninth birthday, my dad bought me an Epiphone 3/4-size Les Paul. Within three months, he got me the Gibson [Les Paul] Studio. I’ve been playing guitar for just about four years.

zZ: In School of Rock, you’re playing a limited-edition Gibson Lzzy Hale Explorer. When did you first get to try it on?
Brandon Niederauer: Last spring during the workshop was when I first played this one. It’s a really great-sounding guitar that likes to be played aggressively. 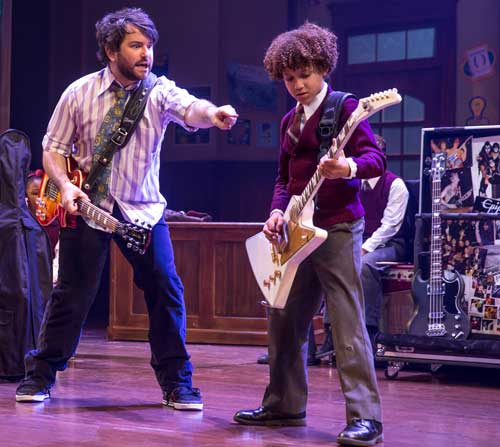 Face-melting solos: Alex Brightman as “Dewey” and Brandon as “Zack” wield their Gibson guitars on stage in School of Rock – The Musical.

zZ: Explorer guitars are known for their solid mahogany bodies. They can get pretty heavy. Does the weight ever bother you, or are you rocking too hard to notice it?
Brandon Niederauer: I don’t notice. The only issue is that I do a lot of jumping around with the guitar on me. The bottom point of the guitar hits my knees and thighs, and I have a lot of bruises on my leg. 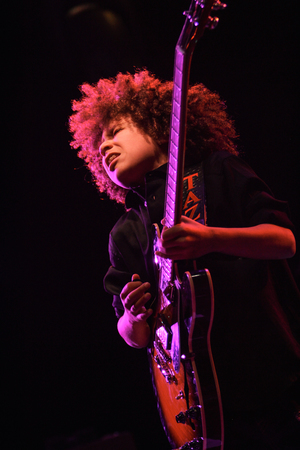 Brandon performs with Lions On The Moon (and his trusty Les Paul Studio.)

zZ: When you’re not performing in School of Rock, you’re playing with your band Lions On The Moon. How did the band get started? How did you get together with singer Nick Winegarder?
Brandon Niederauer: I was on Jam Cruise, and Colonel Bruce Hampton heard me play. The Colonel has mentored Derek Trucks, Jimmy Herring, Oteil Burbridge, and other great young players. He asked me to play with his band, and has mentored me ever since. We did a bunch of gigs together and he introduced me to Nicky, the son of one of Bruce’s friends. He thought we would work well together. We hit it off right away.

zZ: What kind of guitars, pedals, and amps are you playing on the Lions On The Moon album?
Brandon Niederauer: On the album, I play my Les Paul Studio through my vintage 1973 Fender Vibrolux amp. On my board is a Peterson tuner, Crybaby wah, Analog Man Tube Screamer, EarthQuaker delay, and a Mad Professor Simble overdrive. I’ve also added an MXR Phase 90…For School of Rock, it was so cool because they asked my dad what I had on my pedalboard [at home], and when I got there, production had a clone of it right there on the floor!

zZ: If you could jam with any musical artist, who would it be?
Brandon Niederauer: Derek Trucks, but John McLaughlin would be awesome too.

zZ: Tell me about your nickname, “Taz.” How did you get that name? Who gets to call you Taz?
Brandon “Taz” Niederauer: Anyone can call me Taz. Most musicians do. I went to a performance-based music program named Rock and Roll University, and I had to audition because I was not taking lessons there. The program director was Bill Mignoli…he saw me play and said, “You’re in, and your nickname is Taz — short for the Tasmanian Devil, because you play guitar like he spins.”