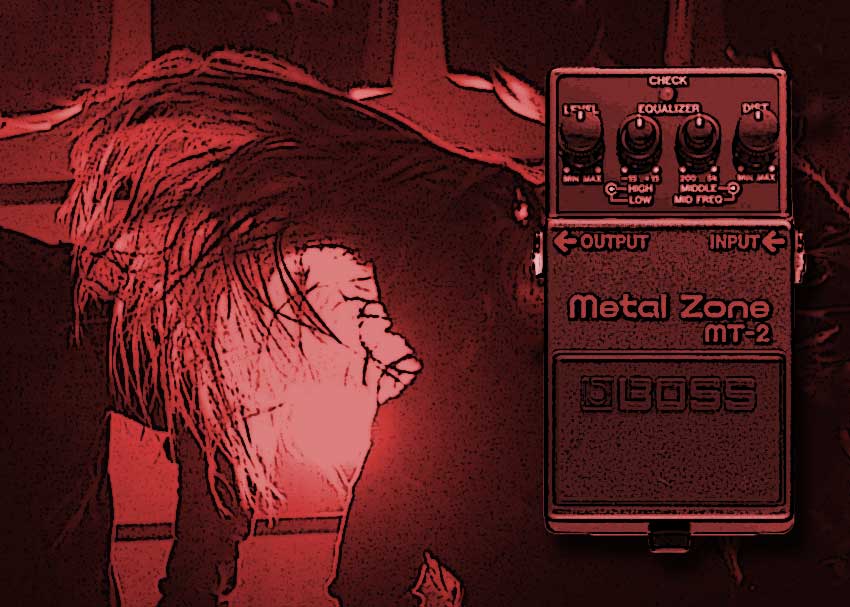 We’ve just come out with an All-Star Gear list at zZounds of our customers’ favorite pedals, and at the top of the heap is the Boss MT-2 Metal Zone, rated at 5 stars with over 750 reviews! Reading some of our customers’ reviews on this definitive distortion pedal brought on a wave of nostalgia, and now, as the pedal is set to turn 25 years old this year, we thought it was due for a retrospective. 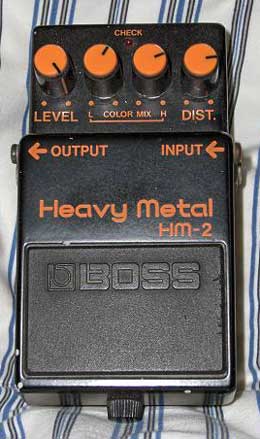 Before the MT-2, there was the HM-2. Released in 1983, the HM-2 Heavy Metal was Boss’s first foray into the high-gain distortion pedal world, and quite possibly the first ever high-gain pedal. With a bit of savvy timing, the HM-2’s release came at a critical time in rock history: arena rock, hair metal, and British heavy metal were selling millions of records and selling out stadiums. Meanwhile, thrash was just appearing at the horizon on the West Coast, as Metallica would release their first record, Kill ‘Em All, that year.

But the HM-2 wouldn’t find its core audience on the Sunset Strip, nor in the stadiums. Rather, it was adopted as the champion pedal of European death metal, and was most closely associated with Swedish bands like Entombed. So why the love among the death squad? Apart from a copious amount of gain, the HM-2’s color mix section presented two knobs: (one labeled “L”) for boosting or reducing the low frequencies, and another labeled “H.” Some consider the “H” knob a misnomer, as it actually boost or cut midrange frequencies, rather than highs. When the midrange is cut, it produces what’s known as a “scooped” EQ, in which the high- and low-end of the mix are given a boost, while the low-end is drowned out. Add lots of gain, and you’ve got instant metal tone that accentuates the lows for chugging rhythms and the highs for screaming leads.

The HM-2 was available for seven years, carving its own legacy among metal heads and prompting Boss to make a few spinoffs, like the HM-3 Hyper Metal and the MZ-2 Digital Metalizer and imitators from other manufacturers along the way. In 1991 it was discontinued, and a new high-gain Boss pedal would take the throne. 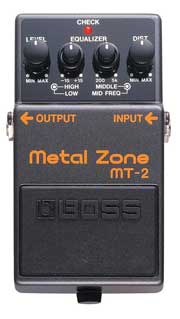 In 1991, the state of music was entering another era. Heavy metal had enjoyed a long reign and had successfully conquered mainstream culture through the likes of MTV’s Headbanger’s Ball. Thrash was also approaching its zenith, as  Metallica released their biggest-selling album, Metallica, or The Black Album, (call it what you will!) in 1991. It was also the year of the thrash/hip-hop mashup “Bring Tha Noise,” which saw Anthrax jamming with Public Enemy. Yet things were about to wildly change: the biggest rock album released that year, Nevermind, by Nirvana, along with other watershed records like Pearl Jam’s Ten, My Bloody Valentine’s Loveless, The Smashing Pumpkins’ Gish, would put metal’s reign on very shaky ground.

It was during this time that Boss discontinued its HM-2 Heavy Metal, and introduced guitarists to the MT-2 Metal Zone. Adapted from the HM-2, the Metal Zone offers the same level and gain controls, with perhaps a tad less gain on tap, but still a whopping amount. Gone are the “H” and “L” controls, replaced with “High,” “Mid” and “Low” +/-15dB boost and cut knobs, making for a true 3-band EQ. What really sets the Metal Zone apart is its mid-frequency control knob, which lets players define where in the EQ spectrum between 200hZ and 5khZ would be most impacted by their adjustment of the mid boost/cut knob. This offers a nice bit of subtlety and player customization over what was otherwise an anything-but-subtle effect.

As metal went underground through much of the ’90s and beyond, the MT-2 retained a dedicated following among metal heads, and still appealed to those who craved high-gain tones. As Metallica cut their hair and grunge (together with less-desirable offspring like post-grunge and nu-metal) ruled the airwaves, metal devotees found refuge underground in genres like hardcore, progressive and alternative metal, and the Metal Zone was there with them.

Imitation is the most metal form of flattery

It’s no secret that pedal manufacturers are constantly inspired by and tweaking upon the innovations of others. Through the years, the Metal Zone has proven itself a pedal worth building upon. For the gripes some players have with its tone, the MT-2 sure has inspired plenty of pedals, like Digitech’s Metal Master, Mooer’s Rage Machine, and Rocktron’s Metal Planet, among many others.There have been tweaks and mods by the likes of Robert Keeley and scores of amateur DIY mod kits available. The Metal Zone is represented in tons of digital models on multi-effects pedals and guitar software. All this emulation is evidence that the Metal Zone has earned its place alongside some of the most storied effects pedals in history.

Maybe the Metal Zone’s longevity is due in part to its name. It isn’t often that a manufacturer slaps the name of a genre on a piece of gear. DOD came out with the Grunge and Death Metal distortion pedals (later re-released by DigiTech) and there is the Roland Jazz Chorus amp, but examples of this are few and far between. It’s like hedging your bets that this piece of equipment would come to be the defining sound of a music genre. Boss certainly didn’t shy away from it, giving metal monikers to at least five of its pedals, yet even through so much evolution and division within metal, there never was a Nu-Metal Zone, a Prog Zone, a Djent Zone, or a (gasp) Screamo Zone. Though there is the ML-2 Metal Core (which arguably could be named after a metal subgenre) it has not replaced the Metal Zone, but rather sits beside it.

My time in the Metal Zone

Once upon a time in my teenage years, I played guitar in a terrible band with my friends. After witnessing the Metal Zone for the first time at my bandmate’s house. I knew I needed that sound. I soon spent my summer job wages and birthday money on DigiTech’s DF-7 Distortion Factory, a 7-in-one pedal featuring models of everything from an Ibanez Tube Screamer to an Electro-Harmonix Big Muff Pi. The variety was awesome, but I wouldn’t have purchased the pedal were it not for model no. 5: the Metal Zone.

Jamming at home, I loved its sound. It was like an instant surge of power with the press of a switch. Nothing sounded better to me, and I’d spend hours just chugging away, reading the tabs in Guitar World or online, trying to decipher the solos and riffage of bands like Avenged Sevenfold and Children of Bodom. And when I played through the DF-7 with my fledgling band for the first time, I discovered a fun feature of high-gain distortion pedals: if dialed in just right, they could make your signal all but disappear. Suddenly, that righteous bedroom tone was practically inaudible in the mix with the band — completely engulfed on one end by bass guitar and kick drum and on the other by crashing cymbals. Same went for my friend using the actual MT-2. Our scooped, “Master of Puppets” tones played through modest solid state amps just weren’t going to cut it.

For those who might like an audible example of this phenomenon, witness the sound of me at 16 along with fellow amateurs, attempting Metallica’s “For Whom the Bell Tolls,” with scooped, high-gain tones. Played in an untreated basement. Recorded on a camcorder. You have been warned.

I still cringe when I think back on those days, but it was a valuable learning experience. I didn’t know it at the time, but my stompbox follies echoed what plenty of other guitarists have gone through. In the 25 years since its release, the court of public opinion has not always been kind to the MT-2. It’s been criticized for having a hissy sound, for burying the mids, and for being, in general, just too much. With that in mind, I’d like to argue that the Metal Zone is a far better sounding and more versatile pedal than it gets credit for. In fact, many high-gain distortion pedals can give players the same troubles, so with that in mind, I’d like to offer a few sensible solutions to these common problems:

Hiss: Lots of pedals create noise. That’s why noise gates exist! If you don’t have one of these, try turning down the gain or the level knob. By the way, even if you’re playing with the MT-2 on the entire time, you won’t want your level to be set so high that it blows your ears out when you first turn it on. Rather, you should turn up your amp volume so you get a mild boost when you stomp on the pedal, rather than a huge spike. Also, single-coil pickups naturally create more noise than humbucker pickups, so that might be another source of your problem.

Disappearing in the mix: It’s all a matter of tweaking your settings. Beef up your mids to at least 2 o’clock, taper off your highs and lows a bit, and you’ll start to hear yourself much more clearly. You can also turn down the gain on your pedal and turn up your amp volume. If you’re using a tube amp, you may even like to get some crunch going on that, then add in your Metal Zone with the gain dialed back a bit. 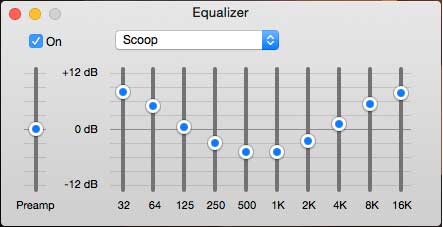 A scooped EQ preset in iTunes.

So for its 25th birthday, Boss’s MT-2 Metal Zone should be celebrated for what it does best: make huge-sounding metal tones available to any player. Most touring musicians who play through professional-grade rigs are not going to need one. But to the aspiring shredder looking to learn their favorite riffs and find an affordable way to sound close to their metal idols, it’s unbeatable. It’s also a great starting point on the way to learning about pedals and how they can shape your tone.

Even beyond the early stages, for those of us who still like to noodle around at home and for whom a stack is a spacial and financial impossibility, the Metal Zone remains the simplest, most fun way to bang out some “Holy Diver” or totally nail the solo from “Fade to Black.” You know you did it.