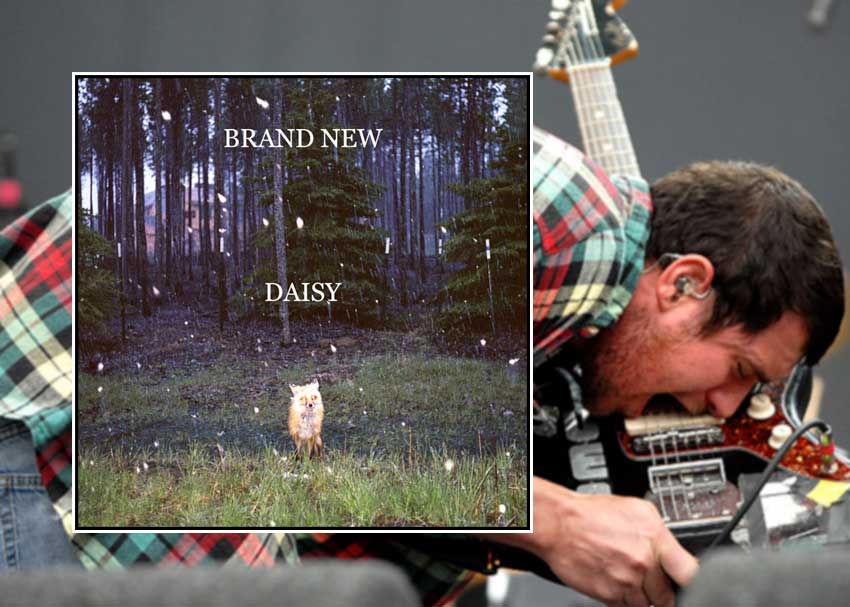 Brand New is a curious outfit, in that they draw fans from virtually every tribe and more or less change their sound between each record. Their debut album, Your Favorite Weapon, can be described as a straightforward emo punk record, and while their sophomore release has plenty of “emo” characteristics, Deja Entendu is anything but generic. The Devil and God are Raging Inside Me all but ditched the “punk” portion of their sound and dove into an acoustic-esque emo record (though it still had plenty of grit at times), which set up their most recent release, Daisy, quite nicely.

I knew it was going to be their best record when I first heard the opening track way back when. A new kind of aggression is thrust dramatically at the listener without a moment to pause for apology. The minute hints of fury they give us a glimpse of in The Devil and God become almost a theme in Daisy. However, the overwhelming grittiness of the album doesn’t compromise their musicality. Brand New don’t try to be something they’re not, but simultaneously, they create something completely new for themselves.

Brand New finds a way to be truly emotional with their fourth major release without actually holding on to the stigma of being an “emo” band. Even when it sounds like a song is going to mimic their previous approach, like “At the Bottom” or “You Stole,” they throw a little edginess at some aspect of the tune.

Two main differences between Daisy and everything else are in Jesse Lacey’s aggressive vocals and an overall noisiness from the guitars that simply overshadow any attempt at the record feeling complacent. A perfect example of the former is the song “Sink.” Not only do we get a passionate approach to the mic, but a near-maniacal laugh/scream in the choruses as well. It adds a whole new color to Brand New’s sound, much like Deja, while being far less self-aware. No lyrics claiming he “hopes this song starts a craze,” just a direct approach to the music on all fronts.

The song that starts a craze for me is “Bought a Bride.” Very few listens through the album don’t result in a replay of track 8. It’s almost pensive in tone while having an incredibly loose and avant garde, yet intentional, approach to guitars near the end of the song.

“In a Jar” sets up the ever-important final two tracks of the record, and it sticks to the aggressive, emotional themes like the rest of the album. Lacey is relentless — while he’s never been introverted as a vocalist, he breaks through what little shell he had for this record.

This 2009 release is the last CD put out by Brand New. Though after a new single has surfaced this year, maturing emo-punks have a new album to look forward to somewhere in the near-ish future.