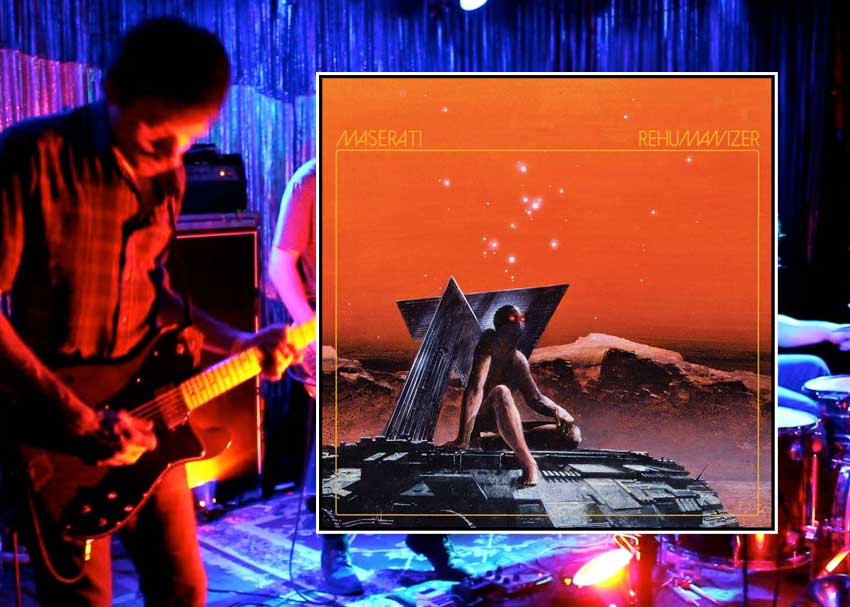 Press play on Maserati’s latest album, Rehumanizer, and you’ll instantly be taken back to the futuristic sci-fi sounds of the past. With heavy synthesizer work in tow, the Athens, Georgia-based band moves their own sound forward, while keeping a heavy anchor in the bloops and bleeps of the ’70s and ’80s. Seriously, a few songs on this album could find a perfect home on the movie Drive‘s soundtrack. But while the synths are up front and center for much of the album’s runtime, it is ultimately the shimmering delayed guitars and dance-y grooves that bring out the band’s familiar sound.

The opening track, “No Cave,” begins with an energetic synth arpeggiation peppered with angelic pads, slowly building for the next few minutes until the bass and drums enter with a driving groove. Finally, blazing guitars make their appearance with some sweetly-toned delay. There is nothing resembling a chorus, there is no singing, and coming in at around 10 minutes, “No Cave” is definitely not a pop song, serving more as a setup for the rest of the album. But, the textures and forward movement of the arrangements make this quite an interesting tune. Just put on some headphones, close your eyes, and let your ears swim in their controlled chaos of rhythms and tones.

Sprinkled throughout the song “End of Man,” heavily modulated vocals can be heard. While I wouldn’t exactly call it singing, it seems as if the vocoded vocals are hinting at a more robotic future, not just for the band, but more as a social commentary. The album’s cover art, which features a humanoid figure climbing out of what could easily be deemed as a spaceship on a Mars-esque planet, could allude to a possible overall theme for the album. The glowing red eyes and featureless face of the figure point to something that is not quite human, but could also be some sort of a “next step” evolution that binds us closer to technology. I mean, the figure on the cover is obviously on some sort of remote planet, shouldn’t it need some sort of space suit if it wasn’t already technologically or otherwise adapted in the first place? Could Rehumanizer be a commentary on the state of technology and how it has become ingrained in humanity to use it all the time? I really couldn’t say since there are hardly any lyrics. But it’s my interpretation that the end goal of Rehumanizer is the shedding of technology to get closer to what it is to be human again.

Sometimes it might seem like we are too focused on the little screens in our pockets and at our desks that we forget to look around and experience the real world around us. Perhaps Maserati is just trying to do their part to make us look within ourselves to relearn how to be human, all set to the tune of a killer album.