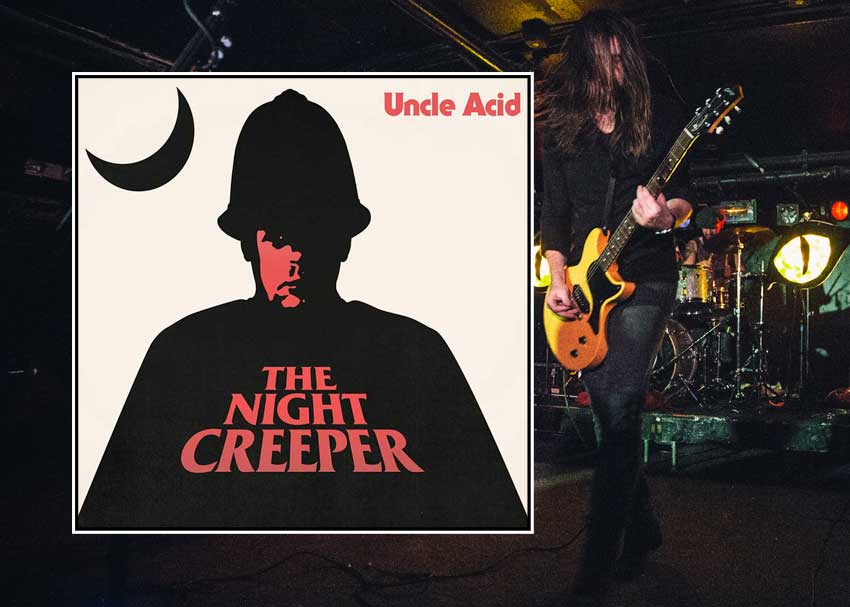 If creepiness is a virtue, then English band Uncle Acid & the deadbeats possesses it in spades. For an album that opens with the lines, “There’s a man who’s just been waiting here all night long/As he watches you he’s smiling there all alone,” the band’s fourth full-length, The Night Creeper, sets an eerie tone right from the beginning. Uncle Acid, known for their heavy grooves, dark lyrics, and fiendishly overdriven electric guitar riffs, expand and improve their style on The Night Creeper. Also similar to the band’s previous releases, this is an unabashed concept album at its core, featuring complex storytelling with recurring themes stretching throughout the entire record. While the music on the LP is fantastic, the album brilliantly unfolds once the lyrics are considered.

Just like a highly entertaining horror movie, The Night Creeper methodically reveals its dark secrets at just the right pace, all while setting the mood with a killer soundtrack. As the title suggests, the album’s story revolves around the eponymous Night Creeper, a character that reminds me of a Jack the Ripper type — a creep hiding in the shadows, patiently stalking his next victim among the streets of a seedy area of town. Without revealing more of the plot (check it out for yourself!), Uncle Acid patiently divulges several more riveting details that end up fleshing out a truly compelling narrative. Eventually concluding with a twist (at least in my interpretation), The Night Creeper could be turned into a pretty rad, yet terrifying, full-length movie.

Sharing the spotlight with the story, the music perfectly sets the mood for each “chapter” of the story. The brooding groove of the title track, “The Night Creeper,” lends a proper dose of anxiety that seamlessly fuses with the lyrical content. The rhythm of “Inside” drives forward like a passionate gallop toward redemption, however, the ever-present and foreboding guitar riff makes it feel as if said redemption is always just out of grasp. The entire record features lead singer/guitarist Kevin Ryan (K.R.) Starrs sounding like a banshee wailing into the night, with his double tracked vocals cutting right through the heaviness of the band. The guitar tones are just as saturated and angry as their previous efforts, with plenty of power tube distortion — and wicked solos — throughout. Whenever I take a listen, a vision of gigantic, road-worn full stacks with the volumes dimed comes to mind. Ultimately, the entirety of The Night Creeper materializes itself as the uneasy feeling you get from being alone, while in back of your mind you know somebody’s watching you. It’s exactly this visceral feeling that makes The Night Creeper such a complex, fulfilling record. Just dim the lights, put on the album, crank the volume, and enjoy.