The dreadnought, perhaps the defining shape of acoustic guitar as we know it, has quite the storied past. Back in the early 20th century, most of the acoustic guitars at the time were of smaller-bodied design, with a more treble-focused sound that required the use of a bass instrument in the band to properly balance the overall sound. On top of this, most guitarists couldn’t get the volume necessary to be heard over other, louder instruments.

The dreadnought was the answer: its larger shape had the extra bass response that most country and bluegrass players desired, and helped give it enough volume to be heard over much more cutting instruments like the banjo or mandolin. Just look at the etymology of the name – a “dreadnought” was a huge World War I-era battleship designed for destruction!

At the forefront of the dreadnought’s development was C.F. Martin & Co., who created the first such guitar, the D-28 in 1931. The guitar in this post’s top image is a D-28, and the model is still going strong today, as Martin continues to honor the classic while also crafting updated and refined versions of their prized older dreadnoughts. An example of this is the Martin HD-28E Retro, or its little brother, the D-18E Retro.

Variations on the dreadnought: 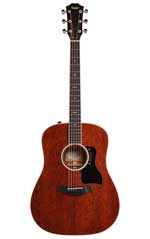 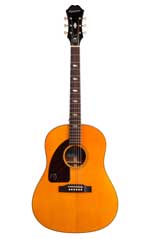 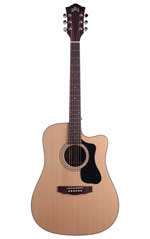 The Guild D-150CE dreadnought with cutaway 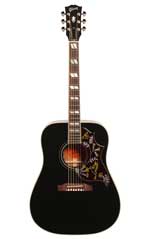 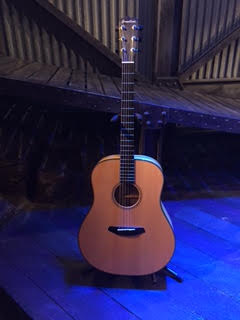 Over the years, other guitar makers like Gibson, Guild, and Taylor (just to name a few) have released their own variations of dreadnoughts with unique measurements and bracing patterns to accomplish unique sounds. Yet despite all of the modern advancements in acoustics, dreadnoughts remain one of the most popular body sizes produced today.

If you’ve seen any CMT music awards show, most every single country artist will probably have their trusty dread in hand. I myself own and gig with a Breedlove USA Oregon Dreadnought because it just simply works for anything that I throw at it (bluegrass, country, rock, country-rock, bluegrass-rock, country-bluegrass, post-pre-alternative-acid-funk-jazz, what have you!)

The science behind the sound

As mentioned above, the secret to the dreadnought’s versatility is its larger body size. This gives it a much louder and fuller sound, which are both desirable qualities for most musicians, and were especially so in the pre-amplification days. Add in the enhanced bass from the dreadnought’s wide lower bout, and you start to see why they are so important in the history of acoustic guitars. Singer-songwriters (to use a broad term) now had the option of performing and singing solo without their guitar sounding thin.

Check out a performance by Paul McCartney on his Epiphone Texan dreadnought and “mouth French horn”… you’ll see.
Dreadnoughts are able to take a lot of abuse — in fact, they actually thrive when strummed with a bit of a heavy hand, another oft-overlooked trait that speaks of the boundless applications of this shape. They are less prone to muddiness or excessive compression in what is known as “overdriving” the tops, so if you’re the kind of player who just wants to strum away, there really is no better choice. I even find that fingerstyle on my dreadnought is pretty dynamic, but I do admit that most of the time I’m flatpicking when playing it. The punch and aggressiveness you get with single note lines are too good to pass up. If you have separation anxiety from not being able to play your Steve Vai licks on your electric guitar, most manufacturers also release dreadnoughts with cutaways too.

That being said, while dreadnoughts are amazing instruments, they are not the be-all-end-all of acoustic guitars. Many smaller body shapes like a Grand Auditorium or a Concert are much better-suited for players who are primarily fingerpickers or who don’t have any need for a dreadnought’s cannon-like boom. With a smaller body shape, you can open up equally rich tones and arguably get a more intimate playing feel. I’ll be going over the strengths of other body shapes in later posts, as they simply cannot be ignored by the conscious consumer. Hopefully this gives a little bit more insight into the benefits and applications of the hugely popular world of dreadnought acoustics.