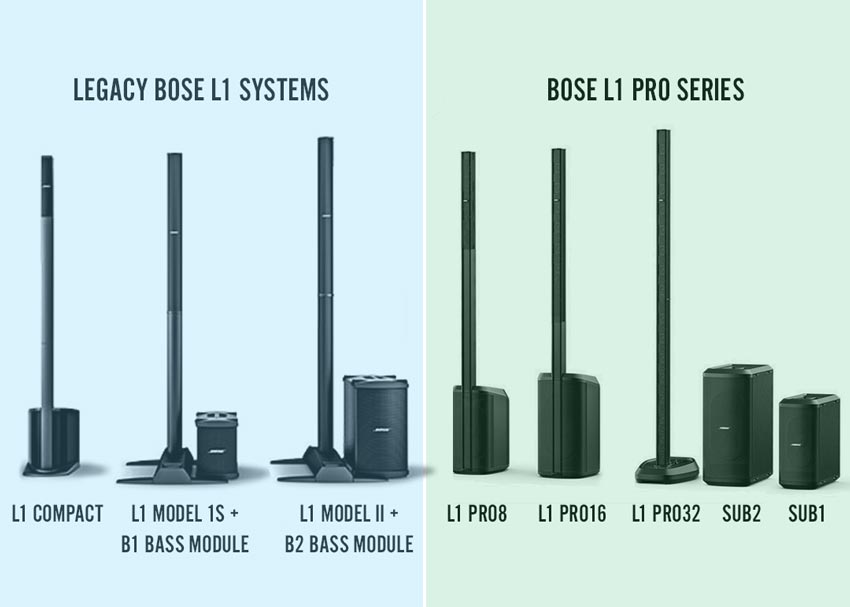 When Bose first announced their L1 “Cylindrical Radiator” loudspeaker system back in 2003, it was considered a radical approach to a live PA system. Over the years, as musicians increasingly adopted the new design, countless competitors began to launch column-style PA systems of their own. When Bose retired their original L1 Classic and L1 Model I, the Bose L1 Model II and L1 Model L1S set the standard, with the L1 Compact system proving the most popular. And now, Bose is back with their L1 Pro series. Read on to see how the Bose L1 Pro8, Pro16, and Pro32 stack up against legacy Bose L1 models.

That extra 9.7 pounds gets you an additional +6 dB SPL of output — 112 dB continuous/118 dB peak SPL at 1 meter, compared to 106 dB continuous/112 dB peak SPL from the L1 Compact. A +6 dB increase in sound pressure level means a doubling of amplitude — which corresponds to about a 50% increase in perceived loudness. As any acoustician will tell you, “loudness” is a subjective measure, but +6 dB SPL is a significant and noticeable increase.

The L1 Pro8’s larger sub also means it reaches significantly lower lows, covering a wider frequency response of 45 Hz to 16 kHz, while the L1 Compact bottoms out at 65 Hz and tops out at 14 kHz. Deep bass frequencies require more power (watts), and if you’ve ever pushed an L1 Compact to the limits of its output, you’ll be pleased to learn that the L1 Pro8 offers more than twice the wattage, according to Bose.

The L1 Compact continues to hold its place as the lightest, most affordable L1 system — making it an especially good fit for speech applications, solo singer-songwriters, or anything that doesn’t require a lot of low-end punch. But the L1 Pro8 adds more than just power — it also adds flexibility, with a built-in Bluetooth receiver and a ToneMatch port that lets you plug in more channels via a Bose ToneMatch mixer. Thanks to its additional wattage, the Pro8 can handle those extra inputs and get plenty loud, so it’s worth the extra investment compared to the L1 Compact.

The Bose L1 Model 1S was the “middle child” of the Bose L1 lineup, designed to deliver a “balance of power and portability.” Now, Bose is retiring the Model L1S and replacing it with the L1 Pro16 — and it’s a significant upgrade.

While you’re scratching your head trying to figure out how Bose shaved 21.6 pounds off this system while making it a lot louder, consider that the Pro16 also adds the on-board 3-channel mixer, where the old L1 Model 1S offered nothing of the sort. Considering all these advantages, it’s no surprise Bose has opted to retire the Model 1S in favor of the Pro16.

Let’s compare the flagship of the L1 Pro family, the Bose L1 Pro32, with Bose’s previous top-dog L1, the L1 Model II. The Pro32 tower comes bundled with a choice of Sub1 or Sub2 subwoofers. We’ll start with a look at the more affordable Pro32 + Sub1 bundle.

Bose says their whole Model II + B2 system is powered by 500 watts, while the Pro32 + Sub2 dishes out 1,480 watts. With the caveat that wattage isn’t necessarily the best measure of a PA system, and knowing that all Bose column speakers squeeze a lot out of each watt, it’s still obvious that the Pro32 + Sub2 system packs significantly more power. Plus it’s got the built-in 3-channel mixer, which is a huge advantage over any Model II system: many solo/duo acts can get away with plugging straight into the Pro32 and skip bringing a separate mixer. That wasn’t an option with the L1 Model II.

When it comes to Bose’s subwoofer offerings, the most significant upgrade from the legacy B1/B2 bass modules to the Sub1 and Sub2 is that the new subwoofers are active, self-powered speakers.

While the old B1 and B2 were passive enclosures that needed to be plugged into a Bose L1 power stand to operate, the Sub1 and Sub2 can run as standalone powered subs. That means you can choose to run your Sub1/Sub2 with any 3rd party top speaker — or pair it with a Bose S1 Pro as your top speaker. You don’t have to plug them into a Bose L1.

You’ll notice that the Sub1/Sub2 weigh more than their B1/B2 predecessors, but that’s because the Sub1/Sub2 are powered: the speaker box now contains a power amplifier, so they’re naturally going to be heavier. Although the Sub1 is 34.7 pounds and the Sub2 is 54.8 pounds, their elongated RaceTrack speaker design and the ergonomic handle mean the Sub1/Sub2 aren’t too much trouble for a single person to carry. (And if they do turn out to be too heavy for your liking, you can always go with the L1 Pro16 instead.)

What’s more, Bose has eliminated the need for the PackLite A1 power amplifier — which used to be a necessary add-on if you wanted to run an L1 system with more than one B2 bass module, or more than two B1 bass modules. Since the Sub1/Sub2 are powered subwoofers, you don’t need to worry about schlepping separate power amps.

All the Highs, All the Lows

The Bose L1 Pro series has been a long time coming. And for all the years that the Pro8, Pro16, and Pro32 have been in development, Bose L1 systems have faced stiff competition from a never-ending procession of column speakers across all price ranges. For a product category that didn’t exist only 20 years ago, it now seems like everyone makes a “stick PA” of some kind. That’s why Bose really had to up their game with the L1 Pro series. When you compare the specs, it’s clear that the L1 Pro8, Pro16, and Pro32 legitimately outperform the L1 Model 1S and Model II. Will the L1 Pro systems grow to be even more popular than the Bose L1 Compact? Only time will tell.