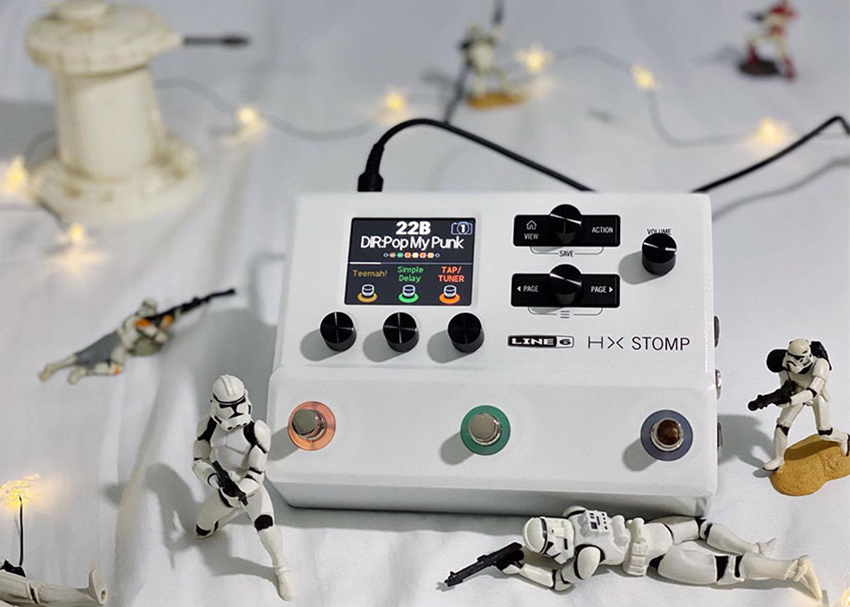 Today it’s easier than ever to get a musical idea from your head bounced out to a great-sounding recording in a hurry. And as the quality of gear climbs higher and higher each year, that means good news for all.

This is where the Line 6 HX Stomp comes in. An all-in-one stompbox, interface and gig-ready rig, the HX Stomp has opened up a lane for working musicians and hobbyists to craft high-quality tones, record their ideas and gig with ease — all from a single guitar stompbox.

Your first step in recording with your HX Stomp should be checking https://line6.com/software/ for the most recent drivers and firmware updates. Without the proper drivers, your computer will not recognize your HX Stomp as an audio interface, even when it’s plugged-in via USB. Driver and firmware updates from Line 6 are always free, and keep your hardware running at its full potential well after its purchase date.

Once the new drivers or firmware is installed, open up your DAW of choice — for this blog piece we are using Ableton Live 10. You can then go into your DAW “preferences” tab and select “Audio” or “Recording” (the exact label will depend on your DAW.) This is where you select the device you’ll be using to capture your signal. The “Driver Type” will be ASIO, and once that’s selected, your HX Stomp will appear under “Audio Device.” There’s more you can do, such as customizing “input configuration,” but most likely your DAW will auto-populate these selections so you can start recording ASAP.

All that’s left to do now is make sure your track is armed to record and that you’ve got a spicy rig loaded up on the HX Stomp!

Building a Rig and Recording

One of the most genius features of the HX Stomp is “blocks.” Just like a real signal path, blocks emulate the chain your guitar, bass, keys, etc. signal travels through and reacts accordingly. Just like if you plugged your guitar into some pedals, an amplifier, cabinet, microphone and into an interface, the HX Stomp replicates all of that within “blocks.” Although the HX Stomp is shipped with some amazing presets that are totally customizable, the real fun begins when you create your own rig in the “Edit View.”

For instance, I crafted a nice “British Invasion” type rig with a bit of overdrive. Building this rig in blocks was not only enjoyable, it led me to noodle on the guitar, which yielded two complimentary guitar parts, that then led to me demoing a track.

This is what makes the HX Stomp great. In the time I had originally allotted to simply learning this stompbox’s tricks, I inadvertently wrote and recorded a verse and chorus idea that I may use in the future.

So how did this happen? I simply scrolled the “Play View” menu all the way to a “New Preset” which is a completely empty bank. I added an amplifier first, then a cabinet, an overdrive that I enjoyed, and began playing around on the fretboard. That’s it. Incredibly simple, yet intuitive when you want to dive deeper. And dive deeper I did.

How to Flesh Out an Idea

Going through presets, building your own and then tweaking is some of the most fun you’ll have while using the HX Stomp. Crafting a tone, then tracking that into your favorite DAW is great, and with the HX Stomp’s cabinet simulation and even cabinet mic-placement customization, it sounds incredibly realistic too. But then comes fleshing out this idea into a full, or nearly-full composition.

If you happen to be able to track full drums, whether a traditionally miked acoustic drum kit, or an electric kit, you know what to do next. But for those who live somewhere they can’t make much noise, who don’t have the space, or who simply aren’t drummers: this is where your DAW’s drum rack or MIDI drummer comes in.

Related: How to Make Your MIDI Drums Sound Human

The way to make your MIDI notes sound more like an actual drummer played them is through a process called “humanization.” | Read »

I’ve always found that tracking to drum tracks is always better than playing to a click. It may be the music I choose to play, or that I just like the feel better, but typically I attempt to find a drum beat I like well before tracking, just so my tracks are that much closer to the final product.

When you’re done tracking drums and guitar, you should almost always add some bottom-end with bass. The HX Stomp also features presets voiced for bass, with a ton of customization for the low end of the spectrum. In the following track, I liked two separate bass presets so much that I double-tracked and hard-panned the bass parts. This added a ton of space in the mix. The track suddenly sounded incredibly wide and punishing, especially on a cymbal hit and when all the instruments come together.

Now that you’ve tracked your ideas down, built on them, and have come to a point far from where you started, it’s a great time to mix, EQ, and eventually master your idea. Obviously, you can take this as far as you want, from adding vocals, to overdubbing leads, acoustic instruments, auxiliary percussion, etc. The beauty of the HX Stomp is that you’ve created a solid foundation for this track with only one piece of hardware.

The future is bright, and the Line 6 HX Stomp is where ideas are born and tracks originate.